For previous nights see these entries:

Sunday evening did not look too promising for observing that evening's closest configuration of Venus, Mars, and Saturn during the ongoing conjunction. Much of the sky had been a milky-white haze through the final hours of the afternoon, and as the sun was setting that haze was condensing into clouds. Beautiful, wispy-looking clouds in shades of pink, but dense enough to block the light of Venus.

This is the sight that greeted me as I set up in my back yard. I aimed the camera at where I knew the planets should be, locked the tilt and pan controls on the tripod*, and took my first image at 8:50 PM: 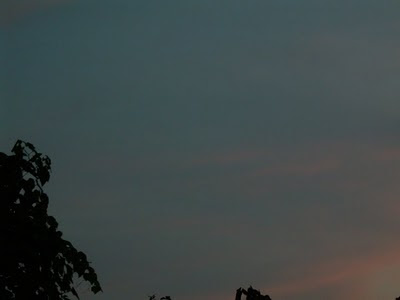 And so things stood for the next five minutes. Finally, the brilliant light of Venus pierced a thinner area of clouds, and I felt a glimmer of hope for the evening's viewing. 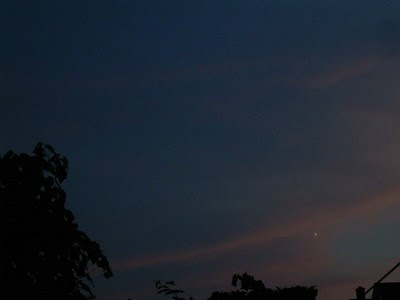 A confession: The only planet I saw all evening was Venus. I took it on faith that at some point the clouds would thin enough to let Mars and Saturn shine through, and even if I couldn't see them my camera might. Saturn actually did show up fairly quickly in the upper right in this crop of an image taken at 8:58 PM: 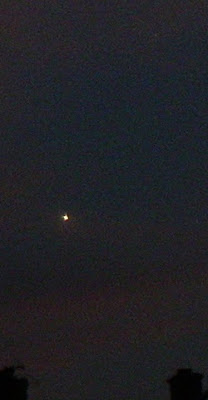 A minute later my camera's rechargeable batteries died. I had to remove the camera from its tripod to pop in the Lithium backups. (I always carry backups since the dead-battery incident with Chelsea Clinton.**) Once I had everything reassembled, there was no chance that the camera was pointing in exactly the same direction, so I started a new series of photos.

I created another time-lapse sequence from the new series. One major advantage of this is that I can look for images that follow the same pattern of shifts as the planets - these are most likely stars that would have been hidden in the background noise of any one photograph. Unfortunately, on this series of photographs there are no stars that pop out of the noise. In fact, I had a hard time extracting Mars from the background noise. I thought my first image of Mars was from 9:06 PM, but a careful study of the time lapse revealed that I actually captured a dim, fuzzy image at 9:04 PM. Both images are laid out below, with the earlier appearance of Mars circled. 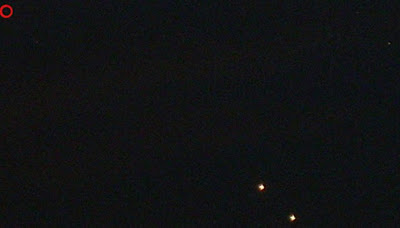 Next is the complete time lapse sequence, which consists of twelve images taken between 9:03 and 9:11 PM, which is when Venus vanished behind a neighboring house. Note that this image is brighter than any individual image taken between 9:03 and 9:11. I stacked the images in Adobe PhotoDeluxe using the "Lighten" option for the Blend on each layer. This causes any bright objects (like stars or planets) to show up very well, but also causes any slightly bright object (like a cloud) to also lighten the image. Stacking twelve dark images like this causes the sky to become very bright; stacking images that were taken even earlier in the night - like the images I took yesterday - results in a sky that is so bright that it washes away any stars and planets. 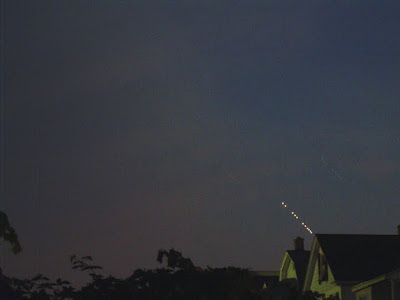 Mars and Saturn are very hard to see in the full-sized image. Here is a crop of the same image that emphasizes the planetary trio. Note that there are twelve images of Venus and Saturn, but only nine of Mars due to the clouds selectively blocking the Red Planet. 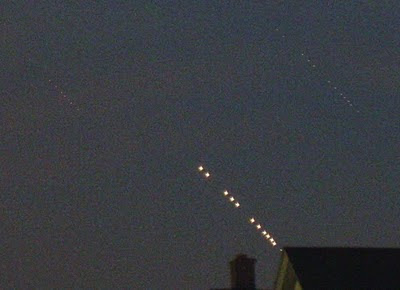 Here, for comparison, is the last truly decent shot of all three planets, taken at 9:10 PM. This is the exact image used as part of the crop, above. 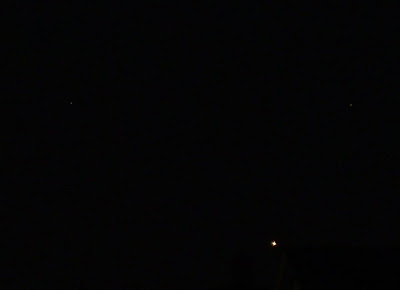 After Venus vanished behind the rooftop I cranked up the tripod extension all the way, got out of my comfy Adirondack chair, and took a few final photos. Mars is barely visible in this final photo, taken at 9:12 PM. 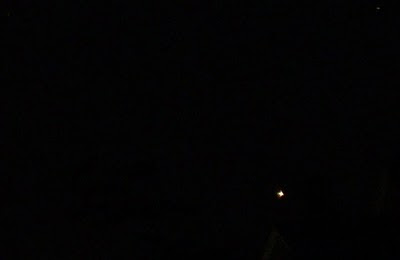 And then I lost Venus for good, called it a night, and packed my stuff into my car for the ride across town. I caught a final glimpse of Venus as I rounded a corner in my car, but by then I had declared the evening's festivities to be at an end. We'll see how the planets shift as they move beyond this, the tightest configuration of this conjunction.


*Not very well, apparently, if you compare the details at the bottom of the first two photos here.

**Heh. This may be an "Untold Tale". While I was hanging out waiting to take pictures of Chelsea speaking, my batteries were gradually dying, and finally died right before she started taking pictures with people. Somehow my batteries accumulated enough charge to permit one last photo - the one shown here.
Posted by D.B. Echo at 10:48 PM