The Pandemic: Year One

One year. One lost year.

The COVID-19 pandemic has been going on for longer than that. The dying started in late 2019. The early epicenter was Wuhan, China. By the time the world knew what was happening, it was too late to stop it from spreading across the world, and probably had been for some time.

COVID-19 is unusual. Highly contagious, yes, as any good virus should be. Kills quite a few of the people who get it and develop symptoms - not ideal for a virus, but acceptable as long as infected individuals do their job of spreading the virus before they die. Asymptomatic spread is a hallmark of COVID-19, and that's unusual.

In the past, asymptomatic carriers of disease (like "Typhoid Mary") were unusual enough to make their way into the history books and national lore. Now the standard operating procedure for COVID-19 is: an individual gets infected by breathing in virus particles that an infected person has breathed out, the virus infects them, they spend about two weeks being contagious without showing any symptoms, and then they develop symptoms while continuing to be contagious. Some of the people who develop symptoms die. Some recover completely. Some recover and suffer lifetime consequences.

And the symptoms! The consequences! Roll the dice, see what you get: lungs that look like frosted glass on an X-ray, "COVID toes," intense generalized pain, chronic cough,  difficulty breathing, loss of smell and taste, hair loss, and lots more. Maybe you'll get some. Maybe you'll get only a few. Maybe you'll die in just a few days. Maybe you'll hang in for weeks, months even, and then you'll recover. Or die.

In the first year, over 2.6 million people have died of COVID-19 worldwide, more than 530,000 in the United States alone.* The United States had an increase in deaths of 15%. in 2020 compared to previous years. In some countries, the rate of "excess deaths" for 2020, the number of deaths in excess of what would be expected based on past data, exceeds 50%.

Oh, we have vaccines now. Two, by Pfizer and Moderna, were developed during the Trump administration, though Pfizer was developed independently of the Federal government. The Johnson & Johnson single-shot vaccine was approved just a few weeks ago, and teachers began receiving it this week. There are other vaccines in use throughout the world. Mass vaccination programs are taking place worldwide.

We also have a plan now. A plan passed without a single Republican vote. During the Trump occupation, Trump pitted states against each other in competition for critical resources. Chaos was the order of the day. That day is over.

Joe Biden pledged to get 100 million shots into arms in his first 100 days as President. He got us there in his first 50.

We're not done yet. We can still snatch defeat out of the jaws of victory. The "new cases" graph may** reflect certain societal movements: the final campaign rally push in September through early November 2020, Thanksgiving gatherings in late November, Christmas in late December. It's undeniable that since mid-January 2021, new cases have dropped dramatically, though the rate of decline has leveled out since mid-February. The CDC is advising a cautious approach, maintaining the rules of masking and social distancing, avoiding crowds and indoor events. Texas and Missisippi have essentially ended all COVID-related restrictions - and the Texas Attorney General is threatening legal action against cities like Austin that have chosen to adhere to CDC guidelines. St. Patrick's Day weekend is upon us. Spring is coming, and Summer is not far behind. The same people who demanded "ENOUGH IS ENOUGH! REOPEN NOW!" a year ago are making that same demand again, after nearly one on every 600 Americans has died of COVID-19. New variations of COVID-19 have emerged. Small but significant portions of the population are rejecting vaccination, while larger numbers of people are trying to get vaccinated and cannot, either because they do not yet qualify in their state or they qualify but there are not enough vaccines available for everyone.***

Is there light at the end of the tunnel? Or will things once again get worse before they get better? Time will tell. 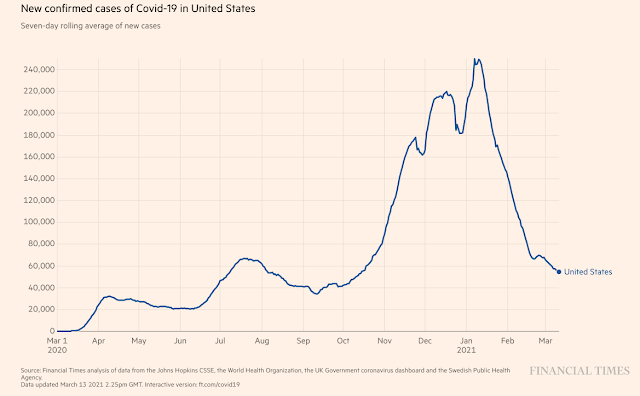 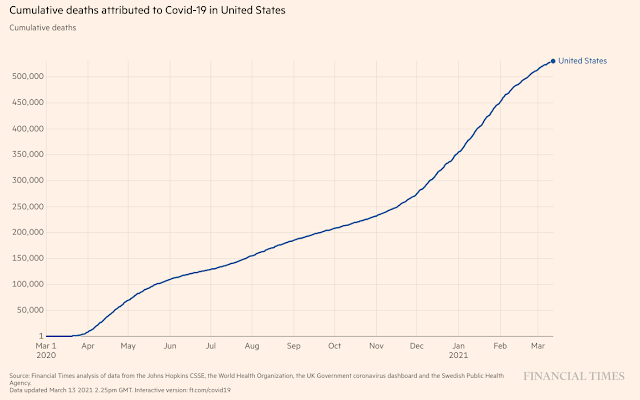 *Last Spring, a friend who was involved in COVID response predicted 500,000 U.S. deaths by the end of 2020. His prediction was off by about seven weeks. My post-election prediction of 400,000 U.S deaths by Inauguration Day was almost exactly correct.

**Europe shows similar increases in the final months of 2020, without Presidential elections or Thanksgiving gatherings, so who the hell knows.

***My mom received her second Moderna shot on March 4, 2021. I received mine on March 6. My brother's entire family has already received both shots, some of Pfizer, some of Moderna. A librarian at a local school district, who also teaches classes and qualifies as an educator, received her Johnson & Johnson shot on Friday, while a librarian at the local library does not yet qualify. My sister, who lives in another state and has multiple health conditions, does not yest qualify for a shot, and other friends who live in the same state as me and who qualify are unable to sign up because of availability.