When Carl Sagan's Cosmos premiered in 1980, TIME magazine ran a cover story featuring Sagan in his "On the Shores of the Cosmic Ocean" pose.  Inside many pages were dedicated to the making of the show, the goals of the series, and the audacity of creating and marketing an expensive TV program that amounted to a lengthy science lesson.  Sagan was a celebrity, and was duly celebrated.

When Sagan died in 1996, TIME barely took note.   His obituary was only a few sentences long, and accompanied by a thumbnail version of the cover image from sixteen years earlier.

Jack Horkheimer has died.  Many people remember him from their childhood, despite the fact that his weekly five-minute show has run continuously for more than thirty years, with new episodes ready to air at least into the beginning of September.  Perhaps this is because people were more likely to be watching their local PBS station at the times when Jack Horkheimer's show* aired  - usually late at night or just after science fiction programs like Dr. Who - when they were young children than after they became jaded and distracted adults.  But Jack Horkheimer was still around, at least up until last week.  Then he died.

I was over my house last night, making my presence known and installing various alarms on a house that has stood without any such thing for nearly a century.  But before I did that I stopped in the back yard to grab a few quick photos of Venus and Mars and some attending stars. 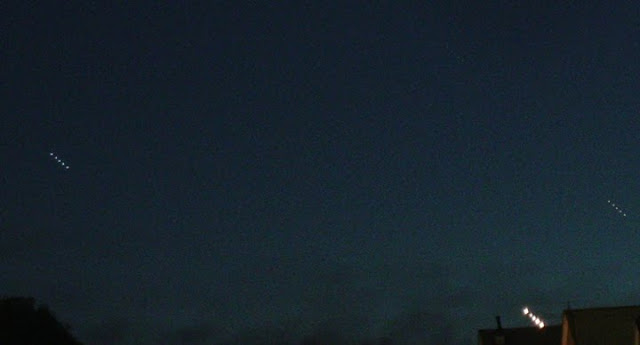 I had started things off pretty late this night - the time-lapse above is of images taken between 8:47 and 8:49 PM.  Venus abruptly dims in brightness between the first and second images and then gradually increases in brightness again until it vanishes behind a rooftop.  This is because some clouds scudded across Venus just after the first image, though their presence is diminished by the way I have combined images.

After Venus had passed out of visibility I turned to face the nearly-Full Moon.  This is a lousy time to try to observe the Moon:  most surface detail is washed out by the absence of dramatic shadows, and any prolonged viewing of the Moon will result in immediate loss of dark adaptation in your eyes.  But I observed it anyway, and even tried to take some photos - which resulted in washed-out, overexposed images.

I went inside, read the instructions for my motion sensor a few dozen times, and watched some TV.  I saw my first episode of "The Jack Benny Show" ever - it featured the Mills Brothers, or at least the two out of four Mills Brothers that the legendarily cheap Jack Benny was willing to pay to appear on his show.   (I wonder how long it took for contemporary audiences to grow weary of the continuous "Boy, is Jack Benny Cheap" shtick.  It took me all of five minutes.)  While the episode was on I went into the other room and installed the first of several motion sensor alarms.  After some trial and error - and the ransacking of a battery-operated screwdriver for its batteries, since the motion detector takes AA batteries, not the AAA batteries I had specifically purchased for these alarms (I have three different sorts of alarms that take four different sorts of batteries) - my alarm was installed, and one part of one side of my house was protected, or at least would make a lot of noise if someone broke in that way.  It was time to go back across town and make my presence known at another house, and start thinking about strategies for securing that one.

As I stepped out of the front door and onto the porch I saw something else amazing in the sky:  Jupiter, mighty and bright and brilliant, getting ready to put on its best show in - well, I don't know, a dozen years, or more like fifty years, depending on which source I am reading.  I suppose in a situation like this, I would wait a few weeks until Jupiter would be rising at a time that would make it more conveniently visible to the general public, and then see what Jack Horkheimer had to say about it.  But unless he recorded episodes many weeks in advance, I do not know if we will be hearing from him on this subject.

Two weeks ago I wrote in a footnote about one of the most memorable events of my late childhood and early teens, the Triple Conjunction of 1981.  I don't recall exactly how I became aware of this event.  Maybe I actually noticed the conjunction of Jupiter and Saturn all on my own - it was very visible at a convenient time of night, and was hard to miss for anyone who ever bothered to look up.  But the sad fact is that most people do not bother to look up.  The hymn "My Soul is Longing for Your Peace" extols the words "my eyes are not lifted from the Earth" as a virtue, and Spider-Man has noted "nobody ever looks up" and has used this to his strategic advantage.

Maybe it was a copy of the magazine Natural History that my father randomly brought home one day while the conjunction was just beginning.  That magazine featured (and, for all I know, still features) a monthly sky chart and planetary information.  I seem to recall going through this magazine around this time, and visiting the library down the street to see earlier and later issues.

But I think it was also around this time that I first started noticing episodes of Jack Horkheimer, Star Hustler.  Could he have been the reason I was so aware of the months-long dance going on between Jupiter and Saturn throughout the first half of 1981?  Maybe.  I don't remember.

I walked down the front steps from my house - I really need to repaint these, soon, I thought, when temperatures get a little cooler and the weather gets a little drier - and to my car, with Jupiter blazing before me the whole while.

Nobody ever looks up.  Jack Horkheimer is dead.  What would he have had to say about this?

I don't know.  I miss him.  From the tributes I have read online, he truly had an impact on a lot of kids during those formative years when they happened to be watching PBS at exactly the right time.  And maybe some of them have remembered his jubilant exhortation at the end of each episode:  "Keep looking up!" A few years ago he actually wrote his own epitaph:


Keep Looking Up was my life's admonition,
I can do little else in my present position.

Goodbye, Jack Horkheimer.  When I look up, I will remember you.