Dundee Road is a narrow two-lane road in Hanover Township, Pennsylvania that runs between Middle Road on the south and the Sans Souci Parkway on the north. I rode this road many times as a child in my grandfather's car, and my uncle's, and my mother's and father's, too. The road passes through a tunnel and under two ancient bridges, as well as under Route 29.

This road was rarely taken out of necessity. It's a scenic route, flanked by trees on both sides.  We would take it on Sunday drives, fun outings sometimes culminating in visits to the cemetery where my family is buried. It was a tradition that whenever we went through the tunnel we would beep the horn to hear it echo.

For as often as I traveled this road as a child, I rarely took it as an adult until a few years ago, when I realized it was a convenient shortcut on my commute to work. Traffic and road conditions are inconsistent enough that I never trusted it on the drive in, but it was a fun and nostalgic route to take on the way back. And sometimes the afternoon sun would light up the trees in a way that was simply amazing.

Dundee Road is currently closed to through traffic, and is scheduled to be closed through 2019 so it can be used as an access road for a large-scale construction project - a project I fear may include removing these old, decrepit, and obsolete bridges, and possibly the tunnel as well. I have long wanted to get these photographs, but for a small connecting road it sure gets a lot of traffic. Even today, I had to step out of the road to let a parade of construction vehicles drive through, and then had to get out of the tunnel in the final photos when a truck drove up behind me.

The first three photos show the view after you go through the tunnel from the Sans Souci side. I don't know if this was a foot bridge, a rail bridge, or some other sort of bridge. 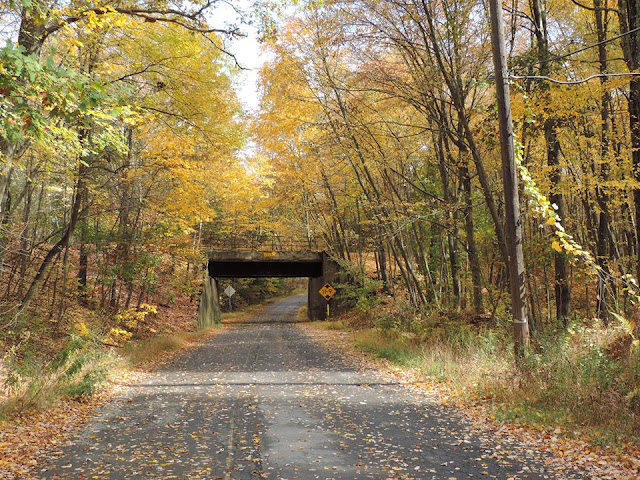 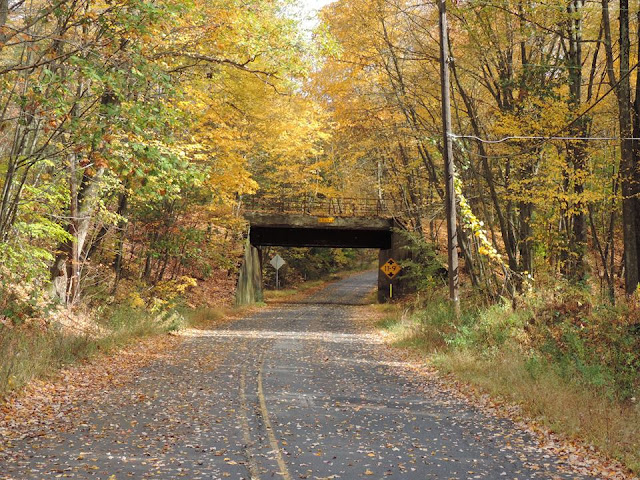 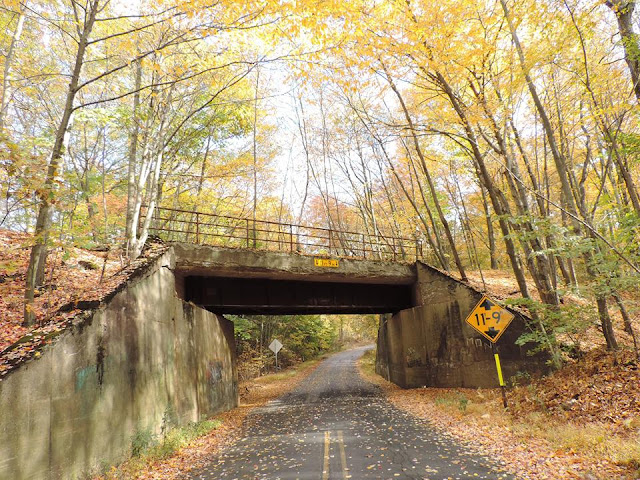 The next two shots are the view of the same bridge from the other side. I had to step out of the road while taking these images so several construction vehicles could rumble past. 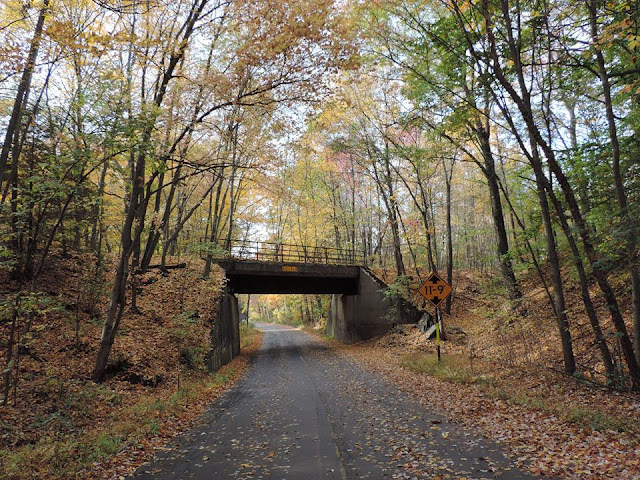 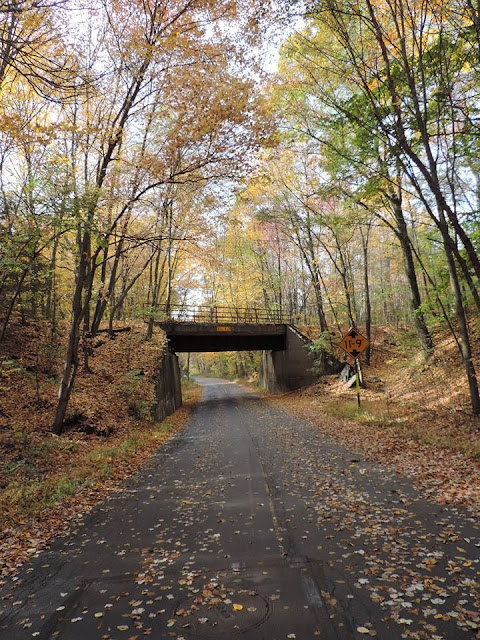 Here is the tunnel seen from the south side looking towards Sans Souci. I took this from a side road into a small housing development - a relatively safe spot to take a photo of a tunnel. 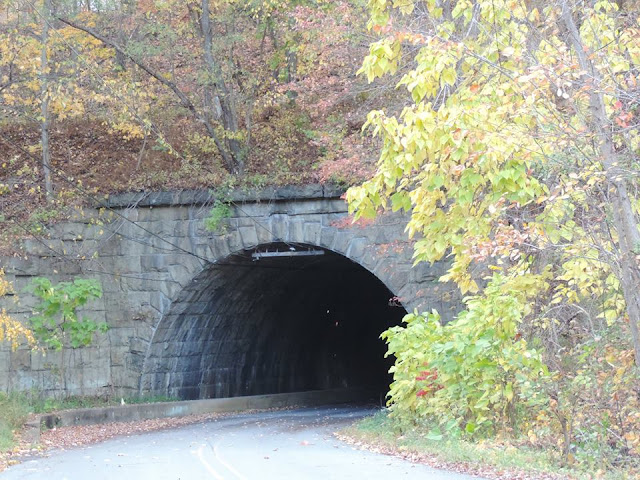 It's somewhat less safe to take a photo from inside a tunnel, even on a road that is mostly closed to traffic. 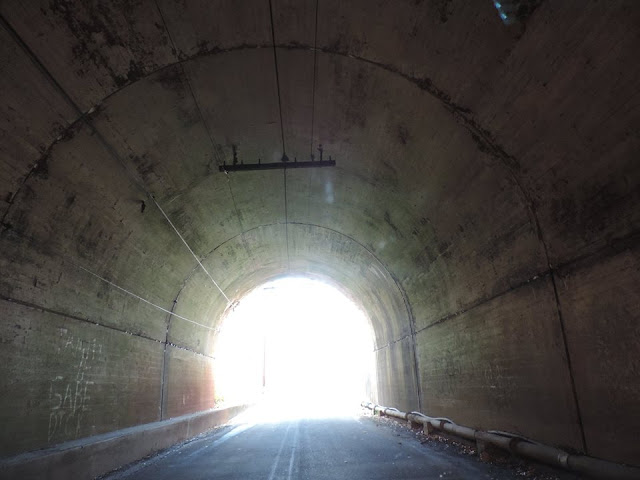 And it is considerably less safe to adjust your camera's settings while you are stopped in the tunnel to change the settings to favor proper exposure of the scene at the end of the tunnel over the interior (and interior graffiti) of the tunnel. 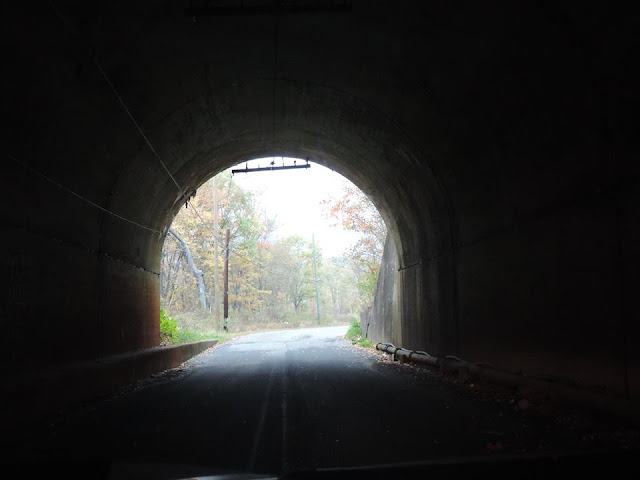 So when you hear a truck roaring up behind you and realize that storm clouds rolling over the sun mean you've lost your light, it's time to call it a day.

UPDATE, November 11, 2017: Dundee Road is now open once again. While the tunnel survived the construction project, the bridge - and many of the trees around it - did not. I'm glad I got photos when I did.


UPDATE, November 16, 2017: Some historical background from Jared Whittaker, via Facebook:


That Tunnel along with the bridge were built by the Delaware, Lackawanna and Western Railroad as part of their Hanover and Newport Branch Line. Trains used to come across a bridge from the Bloomsburg Branch of the DL&W which ran along the river from Scranton to Sunbury. Passing through most towns on the West Side. The Newport and Hanover Branch served the DL&W Coal Breaker in Nanticoke and Hanover Twp. These breakers were The Bliss, Loomis, Truesdale and Auchincloss. The line that ran over this bridge came from The Loomis and went to the Bliss and Truesdale Breakers. Another line went over the tunnel on Dundee Road and served the Auchincloss with Road crossings at Kosciusko St and Prospect St. Sad to see history being destroyed.