I haven't posted pictures of the ongoing conjunction of Venus, Mars, and Saturn since last Saturday because I haven't seen the conjunction of Venus, Mars and Saturn since last Saturday. Not that I haven't been looking. But viewing conditions have been horrible - hazy, cloudy, or just raining. Wednesday night I caught a glimpse of Venus for a minute or so, but that was it. Tonight looked a little more promising. I set myself up at my house across town, where I have a relatively unobstructed view of the Western sky that doesn't involve pointing my camera directly at my neighbors' houses, and actually started shooting before I could even see Mars or Saturn. Here is my first shot, taken at 9:02 PM. 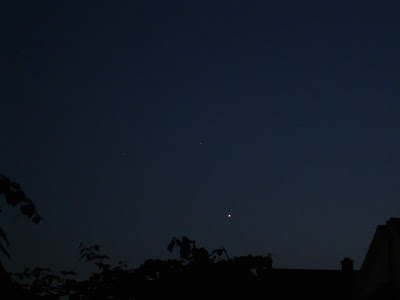 Even without clicking through to the larger version you can still see Mars and Saturn above and to the left of Venus. But the apparent distance between Mars (lower) and Saturn (upper) has increased dramatically since last Saturday. In reality, this change in separation is almost entirely due to our shifting point of view as Earth moves in its orbit around the Sun. Mars and Saturn have actually moved along their orbits in that time, too, but barely enough to be noticeable without sensitive instruments.

No very sensitive instruments are needed to see the apparent motion of these planets across the sky, however, the actual motion being caused by the Earth rotating on its axis. As I was getting ready to take my fourth image of the evening I noticed an intruder entering into the picture from the lower right - an unidentified flying object that I'm guessing was one of them aeroplane contraptions. I thought it would be interesting to get the motion of the plane in my photos, so I started my process: activate the ten second self-timer, allow the shutter to open and drink up its fill of photons, wait for the camera to recharge, repeat. The total time between images was perhaps twenty seconds, with an exposure time that seemed like about two to three seconds. I was able to get three images of the passing plane without moving my camera. When I was preparing these pictures I stacked the three images and told it to combine images using the "Lighten" option. The results were somewhat surprising. 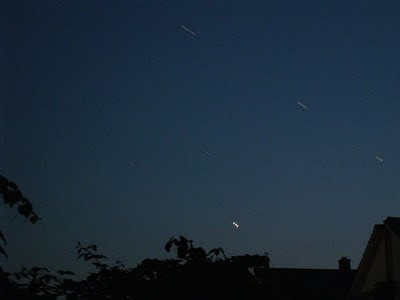 This image looks something like a celestial highway. The plane is moving across the upper right of the image from lower right to upper center. It is becoming closer with each image, and its light trail appears longer and longer as it covers more distance (in terms of degrees, not feet) in the sky for equal amounts of time. But these three exposures, each taken about twenty seconds apart from 9:04 through 9:05, were long enough time for Venus, Mars, and Saturn to march along from upper left to lower right towards the Western horizon. While I believe the apparent sizes of the discs of these planets are a function of their brightness and the multi-second exposures and not an actual measure of how large they appear in the sky, it is interesting that each exposure has allowed the three planets to travel a little more than their apparent diameters - hence the gaps between each planet. (Note that the gaps between image one and image two are greater than those between image two and image three, suggesting that I took a little bit longer getting started on the second image than on the third. Note also the tendrils visible in my grapevines. These tendrils are about a millimeter thick and are being imaged at a distance of about three meters. Wicked.) 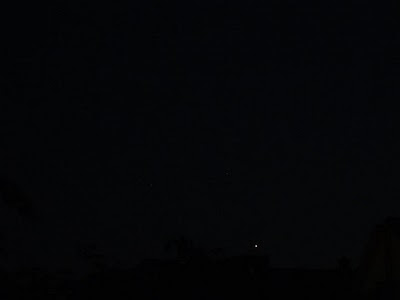 My final image before Venus sank beneath my back grapevine, taken at 9:10 PM. 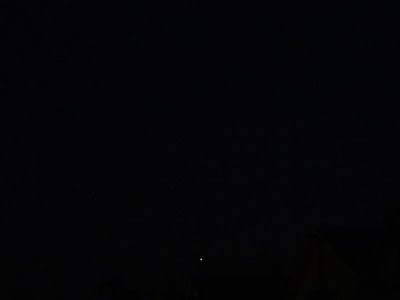 I stood up and cranked up the vertical position of my camera to the maximum for my tripod. This brought it up by about two feet, and I was able to get a few more shots over the grapevine. This final image was taken at 9:13 PM.

Venus, Mars, and Saturn will have their closest encounter on the evening of Sunday, August 8. After that they will appear to pull apart - though a crescent Moon will join in the fun on August 12 and 13. We'll see if the weather permits any photos of those events!
Posted by D.B. Echo at 11:13 PM