I went over to my house to run the weed whacker, replace the handle on my lawnmower, relax a bit, and then see if the sky was clear enough for photographing the planets. The smashed window I discovered in the back of the house on the "storage" side of my double-block while running the weed whacker caused a change in plans. After calling the police, who quickly determined that a) there was no one still in the house, b) the copper pipes leading to the water heater had been cut out of the "storage" side of the basement, and c) in doing this, the water feed pipe to the water heater on the other side of the house had been dislodged, resulting in the water flowing freely along the floor and into the floor drain for up to the full 43 hours since I had last been in the house.

I never did get around to changing the handle on the lawnmower. 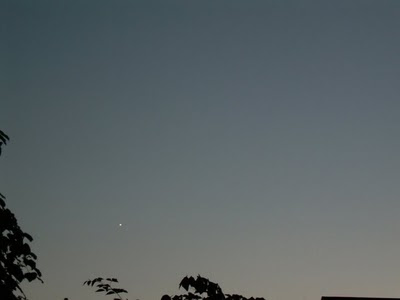 I tried to settle myself down after all this by calling people on the phone while setting up to photograph the planets. Unfortunately, most of the people I tried calling were not available. Also unfortunately, I had not verified the relative positions of the planets before I started, so most of my shots cut off Saturn. All three planets are present in the image above, though multiple compressions may make them hard to spot. You'll have better luck with the crop below: Venus is the big bright thing in the lower left, Mars is tucked in the very upper left corner, and Saturn is on the extreme right about 1/4 of the way up.

While I took a lot of images, most of them did not include Saturn. Here's a composite of three that did, taken at 8:45, 8:48, and 8:48 again. The extra star above Mars is Gamma Virginis, actually a tight double star. 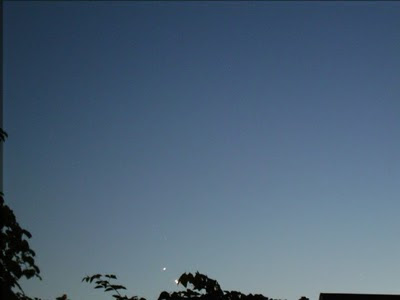 And here is the same image in closeup: 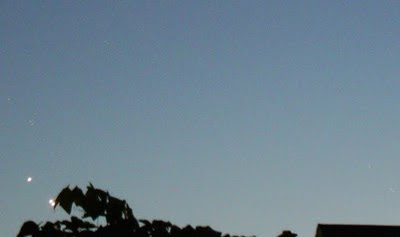 After Venus was obscured by the grapevine I repositioned the camera, unintentionally cutting off Saturn. So while I took numerous photos after 8:48 PM, none of them contained the third planet of the triangle.

Here is the final photo from that series, taken at 8:48 PM: 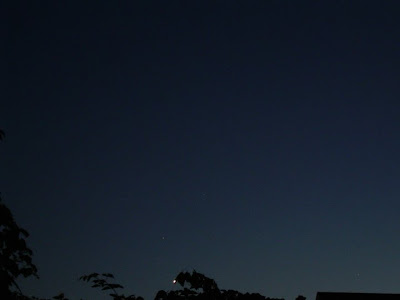 And here is a crop clearly showing all three planets. 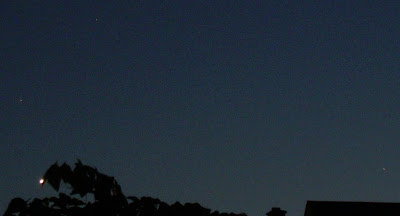 How much longer until these three planets no longer fit in the same field?
Posted by D.B. Echo at 11:57 PM