Ten years of The Littlest Turkey!

While posting it to Facebook last night, I realized my silly little Thanksgiving story is ten years old! Enjoy, and be sure to share it with the kids!

I attended the Writers' Showcase at the Old Brick Theatre in Scranton last night. While I enjoyed all of the featured poets - especially Maggie Glbertson, whose poetry was as always incredibly brave and powerful - I was inspired by the autobiographical narrative poetry of Ali Pica to tell some stories from my own past using the medium of poetry. I thought of two stories I wanted to tell - one, an incident in my apartment in Newark, Delaware in the summer of 1990, and another, a description of working in a TV faceplate factory in the summers of my college years.

I sat down today to write these out, but a third poem came out, based on something I thought about one day while working at AstroPower, a solar cell manufacturer (which today would be termed a "startup" company) that I signed on with after my single, disastrous semester of grad work at the University of Delaware.

I finally did write out one of the other poems. So here they are! First, or at least early, drafts of them.

(By the way: I will be one of the featured readers at the February 27, 2016 edition of the Writers' Showcase! Be there if you can!)

all go in the pile


The ants of Newark, Delaware

When I was renting a room in a townhouse
in Newark, Delaware in the summer of 1990
our kitchen was invaded by ants
a small army of them, little brown things
marching in a line from the back yard
across the concrete patio
through the track of our sliding glass door
across the 70's-era linoleum
up the wooden counter
across the formica counter top
and up the wall into our cabinets

I found them fascinating, and wanted to study them
one housemate wanted to eradicate them
another wanted to deter them gently,
break their trail with peppermint oil
(she was a bit of a hippie, but had a cute girlfriend)

We tried her idea. It didn't work.
Neither did vinegar, or bleach, or baking soda.
The ants kept marching, undeterred by our efforts to protect our food
I stopped being fascinated when I found that they
had worked their way into the threads of a jar of peanut butter
and into the peanut butter itself

I rode off to the supermarket and bought three different types of ant traps
three different brands, in case the ants found one or another unappealing
I placed them every few feet along their track
not just in the house, but outside as well, along the concrete patio,
along the trail that led to the lawn

They didn't work, at first. The ants walked around them, or over them,
unwilling to take the bait
and carry it off to the nest
to poison their queen
and all the other ants

And then, after three days, no more ants.
The ants were gone. Stopped. Dead? I wasn't sure.
But they weren't in our kitchen anymore,
weren't raiding our pantry anymore
weren't getting into my peanut butter anymore

I left the traps out for a few more days
then brought in the ones from outside, before they got rained on
I picked up one and wondered if it had worked
or if the ants had suddenly lost interest and moved on

when I saw that the holes were plugged
with little slivers of plants, no bigger than sawdust
bits of grass or bark or stems
cut and carried from somewhere
carried to the ant trap, the little puck with holes in the sides
filled with poison bait for the ants to carry back to the colony
did they know that this was why they were dying?
did they realize that this was the source of their doom?
did they seal it off in an attempt to save themselves?

Did it work?
Did the poison kill the queen and the entire colony?
Did they seal up the trap and move on?

I never found out. I threw out the trap, washed my hands,
and checked the peanut butter for ants. 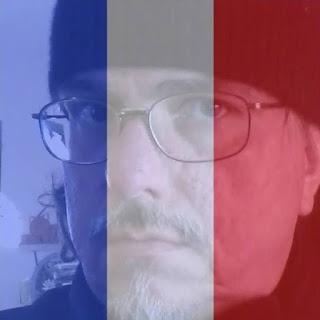 I didn't change my Facebook profile picture to the rainbow image back when the Supreme Court made its historic decision to end anti-homosexual discrimination in marriage. I thought it was too trendy, too bandwagon-y. What would I be saying? "Look at me, I am on the side of right, if you disagree you are wrong"? Yeah, pretty much. Even so, I chose not to change it.

After the November 13, 2015 terrorist attack in France, things were different. An indisputably evil act had been done, an assault on random civilians enjoying the benefits of a free society. One of many, to be sure, and not the only one that week. But Facebook again gave the ability to do a profile image overlay, and this time I chose to participate.

ISIS / ISIL / DAESH / fuck those guys, whatever is a barbarous and evil organization that practices a twisted fundamentalist version of Islam. But at the same time they are sophisticated and media-savvy, with slickly-produced recruitment videos, a nicely-put-together magazine featuring a column written by a captive British journalist, and a strong social media presence.

There's not a hell of a lot you or I can do to stop them, short of not joining them and convincing others to not join them. (Carpet-bombing them into the Stone Age might be as effective as it was in North Vietnam, and sending in troops is exactly what they want.) But Facebook's profile image overlay of the French flag gave users a chance to send a message. Not just a message of support for the people of France, but a message to the terrorists. A wall of people from all around the world standing shoulder to shoulder, middle fingers raised, saying "FUCK YOU" with one voice.

Almost immediately there came the point-and-laugh brigade. "Haha, what do you stupid assholes think you're doing? Y'all ain't doin' shit!" At the same time, Facebook had made this into a temporary option: at the time you modified your profile picture, you could also specify a date when the image would revert. (There were rumors that the rainbow flag image was a social media experiment to see how long users would keep it up, and - probably - under what circumstances they would take it down.)

And then some of the images began being replaced with a new image, mocking the original idea, suggesting that anyone who thought they were helping or changing anything by changing their profile picture was an idiot. 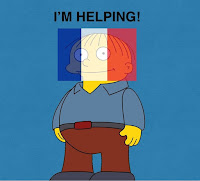 And now, a week after the attacks, most of the images are gone. Taken down, or timed out. Politicians are taking strong and resolute stands about cowering in fear from not just the terrorists, but from anyone who is trying to flee the terrorists, on the assumption that these people might also possibly maybe perhaps have amongst their number a terrorist posing as a refugee. The leading candidate to be the Republican 2016 Presidential nominee is agreeing that registration and monitoring of Muslims is a good idea, while Rhode Island state Senator suggests that the U.S. needs to segregate - or, should we say, concentrate - Syrian refugees into camps.

I don't know where this is going. Maybe in a little while it will be as forgotten as the events of last year. I just wanted to put this out there as a reminder of the events of November 13, 2015, and the way some people chose to respond.