On the night of September 5/morning of September 6, 2020, the Moon passed relatively close to Mars in the sky, and even occulted Mars entirely for some observers.

For Moon watchers, this is kind of a big deal. There are a lot of stars in the sky, and the Moon moves on more or less the same track as the planets, so it seems like it should happen more often that the Moon can be observed passing in front of a star or planet. But in reality, space is big. Bright stars are fairly spread out. Dim stars can be washed out by the light of the moon, even in its partial phases. And we only get to observe the Moon part of the night most nights - from not at all at New Moon and the days before and after, when the Moon is too close to the Sun to be observed and there are no objects bright enough to be seen in the glare of the Sun (with the exception of the Sun itself when the Moon passes in front of it in an eclipse), to all night long in the case of a blindingly bright Full Moon (although some excellent observations of the Full Moon against background stars can be made during a lunar eclipse.)

In addition, the Moon is relatively close to us, as opposed to the stars and even the planets which, to a good first approximation, are infinitely far from us.  (They are not, of course.) So not every observer on Earth is seeing the Moon against the same background. For observers in northern Africa, northern South America, and a swath of the Atlantic between the two, the Moon passed directly in front of Mars. From my observing point, it was a good distance below.

Even the time of the event is variable based on location. This is due again to the relative nearness of the Moon and the effect of observing from various points on Earth. Space.com published a table of "appulse" times, the time when the Moon and Mars were closest together in the sky.

I used a somewhat unscientific method to determine closest approach. I zoomed in at maximum, enough for the Full Moon to fill most of the vertical space on my viewsceen in landscape mode. But this Moon was barely three-quarters full, so I realized it would fit comfortably if I flipped the camera ninety degrees to portrait mode. When I did this just before midnight, I could just barely squeeze Mars and the Moon into the same frame. As the night wore on, this became easier to do. (I had to keep adjusting my frame because of the motion of the Earth, which makes it seem that objects in the sky are moving from East to West, and also because my tripod is not exactly rock solid - the weight of the camera tends to make the tripod settings slip.)

I took numerous photos that night, and chose some of the better ones from the beginning (12:11 AM), middle (12:17 AM), and end (12:20 AM) of the viewing session. (While I could have stayed out longer, heavy clouds started to appear, and it seemed that the Moon an Mars were past their closest approach, based on increasing difficulty re-framing them.) I have cropped these photos to include only Mars and the Moon. While it appears that Mars is moving past the Moon, most of the motion is due to the movement of the Moon in its orbit around the Earth, the movement of the Earth in its orbit around the Sun, and the rotation of the Earth. 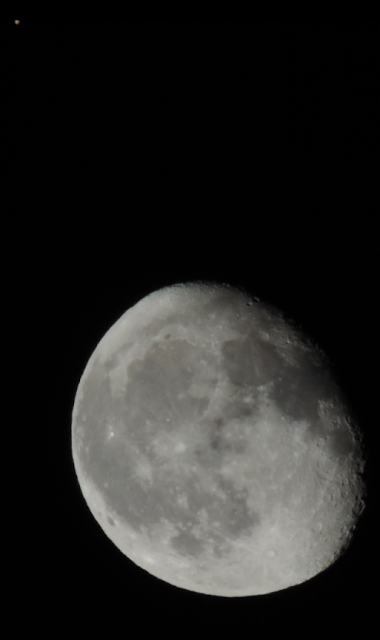 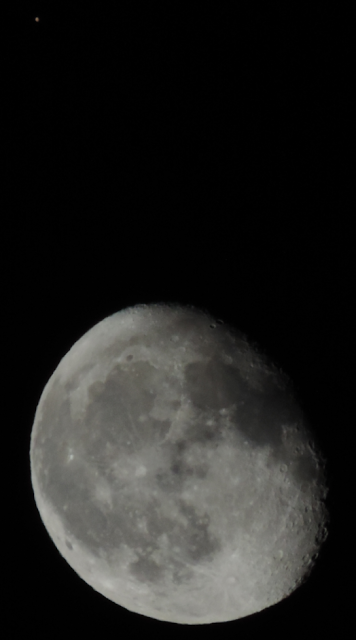 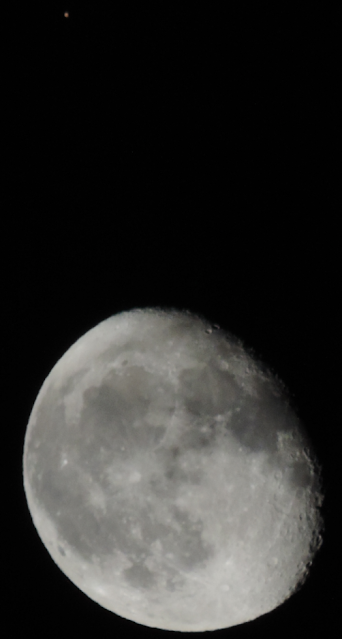