A white crocus before the storm 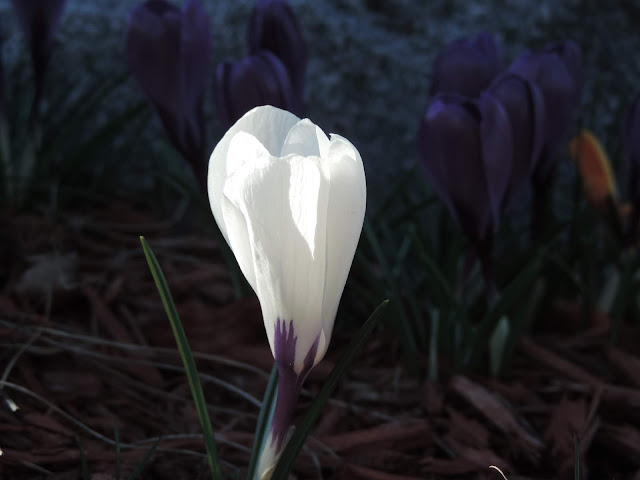 Sunday, March 15, 2020. We knew what was coming. We knew what COVID-19 had done in other countries, what it was doing in other parts of our own country. San Francisco had been on lockdown for a while. New York City was about to follow suit, sort of, if it hadn't already. Death was burning its way through nursing homes in Washington and California. The dying had already begun elsewhere, on a scale so small it seems laughable now. Perhaps 150 deaths altogether attributed to COVID-19 in the U.S. by March 15. A far cry from the 100,000 milestone we probably crossed today.

It was St. Patrick's Day weekend. A few days early; the day itself wouldn't be until Tuesday, March 17. But that didn't prevent people from celebrating that weekend, despite the threat posed by the virus, despite the warnings. Some chose to stay home and stay safe, only to find themselves mingling with partygoers when they returned to work on Monday - most workplaces hadn't closed yet. (My own workplace wouldn't close down until March 20.)

Governor Wolf hadn't issued the stay-at-home order for Luzerne County yet, and wouldn't for another twelve days. The Bishop of the Diocese of Scranton lifted the obligation to attend Mass on Sunday but did not close the churches; he advised that anyone attending Mass that weekend take appropriate precautions. (I watched the televised Mass held at Saint Peter's Cathedral in Scranton that weekend, and it was obvious that almost no one in attendance was taking appropriate precautions. I imagine the Bishop was as horrified as I was, because he immediately shut down all Catholic churches in the Diocese going forward.) March 15 felt like it might be the last day I could move about freely without concern for an invisible killer lurking in the air. I took my camera and headed out to the cemetery to get photos for my mom, whom I had already been keeping quarantined for a week. To see if the crocuses were blooming.

They were. We had a bumper crop this year: over a dozen purple crocuses, at least one yellow crocus, and a brilliant white crocus that had sprouted up away from all the others. I took numerous photos to share with my mom, to give her a taste of a world she was now locked away from.

The photo at the top of this post is the last photo of that set. The purple and yellow crocuses form a dim background against the granite base of the family tombstone, almost like a tapestry or set painting. The white crocus shines like a brilliant promise of better things to come.

The crocuses are all dead now. The flowering bits, at least. The underground parts are waiting to come back next year. Since that time, nearly 100,000 other Americans have died. Now, without any justification, there's a huge push to reopen, to return to normalcy. "Enough is enough, reopen now!" is the rallying cry. Soon, I fear, the 100,000 dead will seem as quaint and small as the number of deaths on March 15, barely seventy-five days ago.

A dream of reopening in the time of COVID-19


I have been too silent during this time. Now is the time for bloggers to do their damned jobs and write the street-level history of what's happening at whatever phase of this crisis we're in. I've got stuff ready to roll, but I just haven't been able to bring myself to write. Maybe soon.

I had a dream last night that I can remember, and I want to write it down before I forget.

Here in the real world we have adopted what is being called the "new normal": Face masks (usually cloth half-masks covering the mouth and nose) and "social distancing" (maintaining a distance of at least six feet / two meters from other people at all times, far too small by some measures) to avoid transmission of the disease by asymptomatic carriers, people who are sick and contagious but don't know it yet.

The disease is still rampant in the U.S. California and Washington did a good job of squashing their early outbreaks. New York City had their outbreak turn into an inferno, but after a few weeks of half-measures followed by many more weeks of hard work and lots of dying, they have finally "bent the curve" so that new cases and deaths are both trending down. The same is not true for much of the rest of the country, where infections and deaths are on the upswing, but at smaller numbers than New York City's. The net effect is a reduction in numbers, but that hides the story of what is going on outside of New York City.


After nearly two months of varying levels of isolation and quarantine, people are getting antsy. "Enough is enough, reopen now!" is their rallying cry. Many are making the argument that there is an level of death that is acceptable in exchange for being able to go out to restaurants and beauticians and...flea markets.


The wearing of masks has become a political issue. The CDC, despite Donald Trump's efforts to muzzle it, has issued guidelines recommending the use of masks or cloth face coverings to reduce the spread of COVID-19. Right-wing pundits are routinely attacking masks as useless, and their followers have picked up on their cry. In truth, any mask that isn't at least as effective as an N-95 respirator will not protect its wearer from the virus. But that's not what the masks are for. They're basically spit guards, intended to keep you from spewing out droplets of moisture from your moth and nose that can carry the virus and infect others. The mask isn't intended to protect its wearer, but rather everyone around its wearer. Individuals lacking in empathy cannot grasp this concept.

Also, it can look pretty cool.


The use of masks is strongly recommended in any public place, and is required in many private areas like supermarkets. An anti-mask league has appeared of people adamantly refusing to wear masks, causing disruptions when asked to do so (and occasionally murdering anyone who has the temerity to refuse them entry without a mask), and sneering at, ridiculing, and coughing or even spitting on those who are wearing masks. An informal survey by writer and notorious Twitter troublemaker Gail Simone revealed vast regional differences: in some areas old people wear them, but not the young, and in other places it's the opposite; some places have most people wearing masks, while in others mask-wearing is the exception; and in some cases couples are seen where the woman wears a mask while the man does not. (On a recent grocery store trip the only person I saw not wearing a mask was the woman in a couple; her mask was pulled down around her neck.)

Anyway, about that dream...

I had a dream that restaurants in this area had reopened. Social distancing and mask-wearing were still recommended but not required. Several of my friends and I went out to eat at some restaurant that seemed to have a blue-lit underwater cave theme. I realized as we stood in line to be seated that I had forgotten my mask, but then I noticed no one else was wearing one.  I became very anxious and uncomfortable. We moved to select our seats, which seemed to be arranged in two tiers of stadium-style seating around an empty swimming pool, like an arena. (The feeling was that this was a Medieval Times-style restaurant, where the entertainment took place in the pool - an interesting but ultimately very expensive concept.) My friends wanted to sit in a crowded part of the arena, but I asked if we could sit in the one part that was relatively empty. The seats there were upholstered and overstuffed and looked much more comfortable, anyway.

And that's it. That's all I remember now, more than three hours after I awoke.

I wonder what everyone else is dreaming about?

(P.S. I'm seeing ads for face masks with valves built in. Please don't buy those masks. The valves defeat the purpose of the mask.)