I Own the Moon

Many years ago I got a telescope as a Christmas present. It's what's known as a "department store scope", a silver-gray refractor with a small aperture and a variety of overpowered eyepiece lenses. Serious amateurs bemoan the popularity of these scopes as gifts: they are difficult to use, difficult to aim, and produce poor-quality or overly-sensitive images. The frustration that results from trying to use one of these telescopes to see anything tends to convince many aspiring amateur astronomers to take up another hobby.

I made mine work.

I remember the first time I saw Saturn through it. I had followed the advice in my astronomy magazines and used the lowest-power eyepiece. I aimed the tube carefully, peered in the eyepiece...and there it was. Tiny, very tiny, but pin-sharp. I could see rings. I think I could even see bands, if I squinted just right. But it was there. This wasn't Saturn in a photograph. This was Saturn, live, real. In my telescope. In my lens. In my eye.

This was my Saturn. Maybe at that moment I was the only person looking at Saturn through a telescope. Probably not, but even if other people were watching, no one else had these photons. These photons had come from the sun, bounced off Saturn, traveled back across space, penetrated the atmosphere, found their way into my telescope and onto my retina, and no one else's. This Saturn was mine.

One of the great frustrations of my early efforts with digital photography was my inability to get a good photo of the Moon. My zoom wasn't strong enough, my image didn't have enough pixels, my camera couldn't adjust for the brightness. At best I could get fuzzy pictures that had some Moon-like features on them. 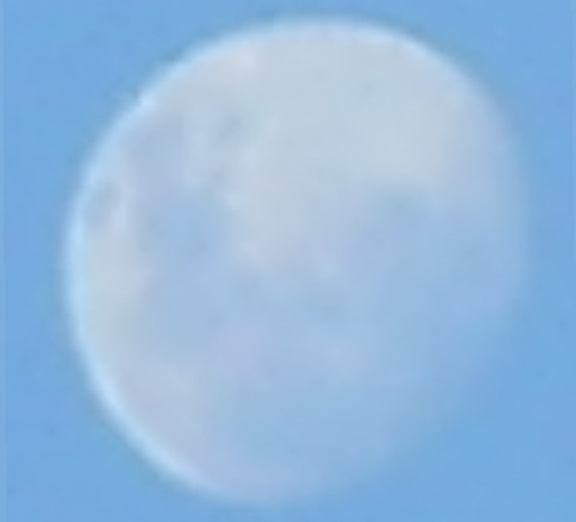 Earlier this year,courtesy of my job, I became the owner of a new digital camera, a Nikon Coolpix P520. It is my third Coolpix camera, but it has capabilities far beyond the previous two. It has a 42x zoom. This is interesting, not just because of the Douglas Adams connection, but because 42x is a sufficient zoom to result in an image of the Moon that nearly fills the frame. It also has very sophisticated image stabilization and the ability to adapt to different levels of image brightness. It turns out that it is ideally suited to take pictures of the Moon.

The level of detail is astonishing. And take note: the first three of these photos were taken freehand. At 42x, in Sports (high shutter speed) mode. (The last one was taken using a tripod and 60 frames per second imaging, with brightness and contrast enhanced.)

And these are my images. Mine. My photons, my camera, my lens, my imager. No one else saw exactly these same images. This is my Moon.

So how about you? Wherever you are, unless you live underground, the Moon is visible some time during the month. It is bright enough to penetrate even the most light-polluted urban environments. You almost certainly have a camera, very likely a camera better than mine. What's keeping you from aiming it at the Moon and snapping some photos?

This is what I think of as the Shoot the Moon Challenge: everybody should go out and get some photos of the Moon. Post them online, on your blog or Facebook or Twitter or Instagram or wherever. Share them with the world. Check out other people's images. Hone your skill, improve your photos. Take better images and post them. Whatever you get will be your Moon. Other people will have images of the Moon, but none of them will be the same as yours. None of them will be the same as mine.

But not these. These are mine. I own these.

I own the Moon.