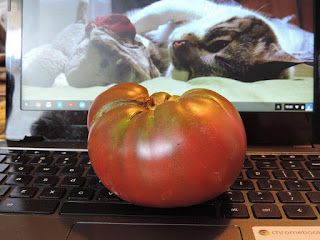 2016 was a bad year for blogging for me. I lost three of my animal friends - Scooter, Nikki, and Baby Boy - and I really had the wind taken out of me. I'm realizing now that I have some stories to tell from 2016. In some cases I told those stories elsewhere, on ephemeral sites like Facebook or Twitter. I'm gathering the information from those sites and presenting it here.

I didn't get seeds started until very late in the season, possibly not until late April or early May. I had picked up a packet of Better Boy and a packet Black Krim, a variety I had always been interested in due to the promise of its exotic color and flavor. Everything I read about this variety warned about low germination rates and low yields, so I decided to start more of that variety than the other.

I think I had a better germination rate for Black Krim than Better Boy. Both were started in terra cotta planters on a windowsill that would get the morning light, a spot that has given me good germination success in the past. After a few weeks on the windowsill I decided it was time to begin giving the seedlings some exposure to the outside world by placing them on the front porch (which receives sunlight from midday on) before I left for work and bringing them in at the end of the day. After a few weeks of this hardening-off, it was time to move them into an outdoor nursery, large planters with eastern exposure nestled under a Rhododendron. By early June they were ready to be planted in the yard.

I didn't dig a dedicated garden this year, and the one I had dug back in 1992, directly over a shallowly-buried gas line, has been allowed to grow over. (My last real garden was in 2006, in one half-heartedly dug next to the 1992 garden, but I haven't planted one since then.) But there are some spots that are good for planting around the foundation of the house. There is also a spot in the back yard behind the shed, rosebush, lilac, and garden swing. For years it had been in the shade of a neighbor's arborvitae growing along a chain-link fence. After some new neighbors moved in a few years ago, they removed the arborvitae and replaced them with a white plastic fence. Almost immediately weeds sprang up along the fence, big, exuberant weeds that would regrow as quickly as they could be pulled. Something was special about that location, I realized. That was where I would plant tomatoes.

I had too many.

I filled the space by the fence with Black Krim, six or seven of them.

The south-facing side of the house receives full sunlight for most of the day, plus reflected sunlight from the house. The heat there can be horrible, and the soil along the house has been baked into lumps of light-tan clay. I had covered it with several inches of cut grass at the end of the previous year in anticipation of planting a new garden there, and now the soil seemed much more friable. I planted Better Boys on the west half of the garden, and Black Krims on the east half.

By mid-August the tomato harvest had begun.

The "weed garden" tomatoes grew best and most vigorously, despite (or because of?) considerable shade. The lone plant on the north side of the house grew almost as vigorously. The plants on the south side grew well, but needed the most attention; the high heat would dry them out quickly, and in the end they seemed almost stunted. So too the potted tomatoes, which also seemed to display nutrient imbalances. The lone tomato on the east face of the house grew well, but produced few if any tomatoes.

I harvested bushels of tomatoes, eating them raw, fried when green, in sandwiches, and cooked into sauce. I did not find the flavor of the Black Krim as as exciting as I had expected, and actually preferred the Better Boy for most applications. I may actually start fewer seeds this year, and may reverse the locations of the tomatoes relative to 2016. We'll see how things go in 2017!

Email ThisBlogThis!Share to TwitterShare to FacebookShare to Pinterest
Labels: 2016, Yard and garden

Here's a poem I wrote back in February 2015, which was almost the end of an especially harsh winter. It's nominally about the gardeners' madness known as "The Februaries," which I have managed to resist for another year.

It's the reason there are so many extra seeds in each seed packet.
We call it The Februaries.

Seeds will sprout in their own time
they respond to the rhythms of the season, the length of the day,
the coolness of the night

You can't plant a tomato seed in December and expect to have tomatoes in March.
Seeds don't work like that, and every gardener knows this.
Seeds started in February have a lousy germination rate.
They will rot in the soil, and those that sprout
will produce seedlings that are weak and leggy
stretching desperately for sunlight that isn't there
waiting to be bathed in warmth that is weeks away.

Yet every year, some - many - most gardeners will give in to the madness
convince themselves that this year maybe, just maybe
things will be different.

The seeds will sprout, the seedlings will be robust,
and will grow into plants eager to be transplanted into the garden
as soon as the soil can be worked.

Weeks later, as March brings with it the promise of new life
the gardeners will look with disgust at their seed flats
empty but for a few scraggly seedlings embarrassing to view

And they will throw out the lot,
toss it into the compost,
and plant the rest of the packet.

See the crescent of Venus!

Because the orbits of Venus and Mercury are inside the orbit of Earth, we can see these planets display crescent phases when they are between us and the Sun. Venus is a lot closer to Earth during these crescent phases than during other points in its orbit, so it appears much larger - to the point that the crescent of Venus can be discerned with the naked eye by keen-eyed individuals. My eyesight is nowhere near good enough for that, but the zoom feature of my camera, combined with a high shutter speed mode, has allowed me to take pictures like the one above. (For a sense of scale, with the same settings the Full Moon fills the entire vertical space of the image.)

From February through March 2017 Venus will put on quite a show in the west after sunset. Unmistakably bright, its crescent will be getting thinner while the disc of the planet itself is increasing in size - meaning the planet will maintain its brightness, even though its appearance through binoculars, telescopes, and high-zoom cameras changes dramatically. (See this page, which is continuously updated, for more information, and the full version of the table below.)

This isn't a rare occurrence, but it's worth getting a look at when it does come along. Check it out through late March 2017!