Well, the U.S. has essentially come to the consensus that they're sick and tired of COVID-19. They're done with it. Over it. So therefore, COVID is over. Masks off! No more restrictions!

This isn't over. I don't know if it ever will be. But the decisions that have just been made are going to result in a lot more deaths.

I had an appointment in Hazleton this week. It was the first time I've been there in many years. Hazleton is an oddball city: one of the largest cities in Luzerne County, but isolated from much of the rest of the county and situated practically on its southern border. It was once a wealthy city. A self-contained city, a place where you could be born, grow up, and die, all while being convinced you hadn't missed out on anything the world had to offer. It was also, I am told, once a Mafia-infested city, and the departure of the mobsters who once ran the place and propped it up financially can explain much of the sudden economic downturn the city has experienced.

About twenty-five years ago the ethnic makeup of the city started to change. Up to that point it was majority Polish and Italian, old-timers who had worked in the mines and ran the mines and owned the mines, and their families and their children who hadn't yet fled for greener pastures.

The newcomers weren't there for mining. Many were immigrants from Mexico, looking to work as laborers in some of the remaining industries in the area. Their arrival was greeted with hostility. One local politician built his career on trying to drive out the immigrants. His efforts failed, repeatedly, at tremendous cost to the local taxpayers. These failures have not dissuaded him from continuing to run for public office - allegedly he is next planning to run for governor. Had he succeeded, Hazleton would today be a depopulated ghost town, as the old residents have died and their children have moved out of the area.

Hazleton has been a COVID hotspot from the start. There are several theories as to why. Regardless of the reasons, such a place should be approached with tremendous caution. At the endodontist's office I was the only one, aside from the doctor and her assistant, wearing a mask. I watched people go in and out of the pharmacy next door without masks. We're not gonna make it, are we?, I wondered.

There are two basic ways to get between my house and Hazleton. One is on Interstate 81, the major highway that runs through Northeastern Pennsylvania on its way from near Chattanooga, Tennessee to the Canadian border with New York. The other is PA Route 309. I took 81 there and decided to take 309 back. It's been years since I've taken that road, even longer since I took it in the daytime. I remember it as a scenic route through the mountains south of my house. (The other route, I-81, gives some beautiful views of the Wyoming Valley, though there are no scenic overlooks where you can park and really appreciate this.)

I turned around and pointed the car home. Route 309 goes through the heart of Hazleton. Once upon a time Hazleton was a big, wealthy city, awash in coal money. Schools were big, churches were big, office buildings were big - by NEPA standards. That money dried up when deep mining in this area died in the aftermath of the 1959 Knox Mine Disaster, though some surface mining continues in the area to this day. Even twenty years ago, Hazleton still retained some of its veneer, though the end was on its way. On that day what I saw was a city that used to be: Schools still standing, their names seen only as shadows where there once were letters. Churches converted to new denominations, or standing empty. Vacant office buildings looking ready for business except for the orange plastic fences blocking access.

The ride out of town was just as bad. That part of NEPA has always been a bit odd, with residential houses freely mixed with businesses along the side of Route 309. But now many of those businesses are closed. For every two or three houses, it seemed, there was an empty business.

NEPA is changing. Everyone in this area knows that. When I went to college in Scranton in the mid-to-late 80s it was like a big, broken-down, abandoned amusement park. There were demolition sites everywhere as old, run-down buildings were torn down. Decades later Scranton has experienced a renaissance of sorts. Wilkes-Barre sustained horrific damage in the flood of 1972. It was rebuilt and revived in the 70s and 80s, experienced a decay in the 90s as Scranton's fortune rose, but has gradually worked itself up to a new state of prosperity. In both cases the fortunes have been largely tied to the rising fortunes of the University of Scranton, and King's College and Wilkes University in Wilkes-Barre. Hazleton, on the other hand, feels like a city that has had its plug pulled, like a place where the people who once propped it up have taken their money and left. Where will it go from here? Time will tell.

The Omicron surge has largely passed. New cases have dropped, and deaths are finally dipping. Still, cases and death rates are still as high as or higher than they were during the initial surge in Spring 2020. Nevertheless, many states are giving in to the demands of the "REOPEN EVERYTHING NOW!!!" crowd to drop any mask mandates and other restrictions that might in any way present an inconvenience. More people are going to die, especially the most vulnerable: the elderly and those with compromised immune systems. As restrictions fall away, anti-maskers are taking a more aggressive approach to those who are still wearing masks - some of whom have no intention to put up with any of their crap. 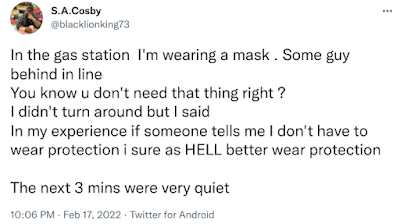 Cases are dropping dramatically, in the U.S. as a whole and in Pennsylvania as well. In both graphs, case counts exceed where they were in Spring - Fall 2020 and much of Summer 2021: 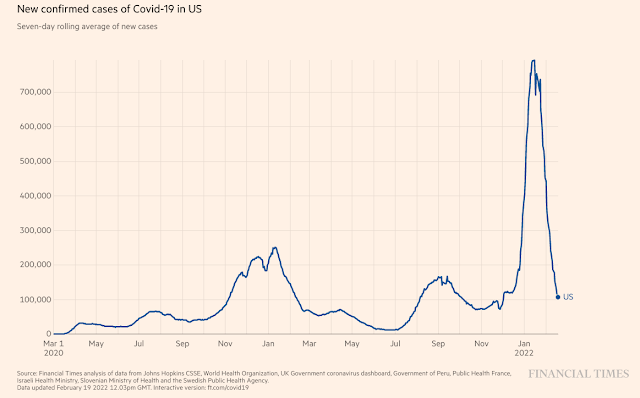 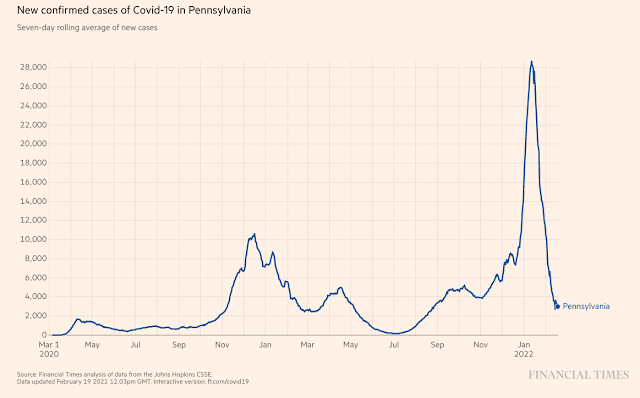 Deaths, not so much: 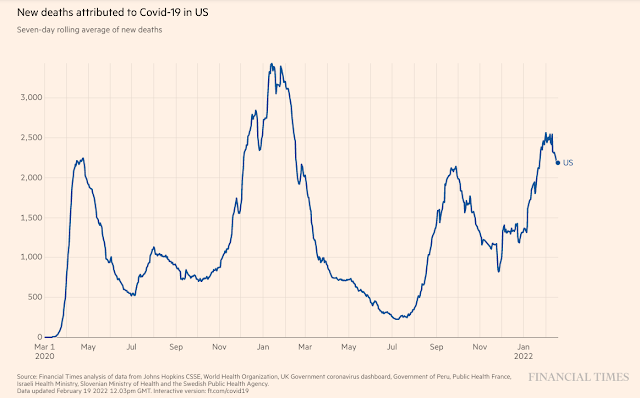 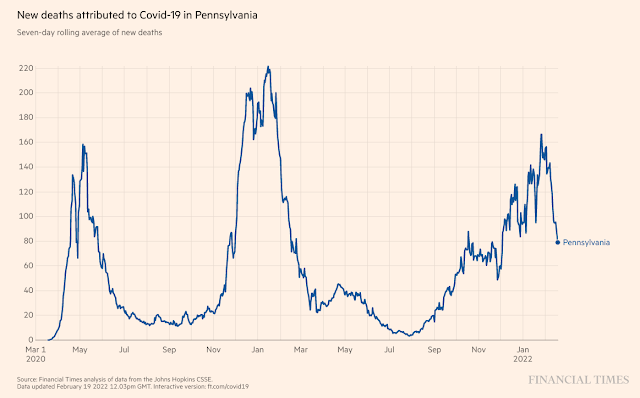 And in the face of all this, everyone is declaring "RETURN TO NORMAL."

The world that we knew in 2019 and before is gone, along with millions of people we knew back then. COVID-19 and all its variants are here. Welcome to the new normal.