When last we met, I had just said goodbye to another of our cats, and we had gotten word that the church I had grown up with would be permanently closed. COVID infections had plummeted, though the "Delta variant" of the disease seemed to be threatening a late-Summer resurgence.

Then I went silent.

But not really. I responded to the church closing in the way I usually do: I created a blog. I intended that it would be a place where I could share all of my photographs and memories of the church, and where other parishioners could do the same. But I quickly discovered that I had far fewer photographs than I remembered, and no one else was really interested in sharing theirs. I took my shot, said what I wanted to say, and stopped.

Babusz was the last of my animal friends to die in 2021. (Ray had died in the Spring, on the same day I got my second COVID shot.) We are now down to three older cats born in 2009, and Mama Cat (most likely born in 2017) and her babies who were born in 2019. All are ferals. Few of our ferals have lived much past 12 before cancer killed them. Feral cats select for fecundity, not long life.

None of my close friends or family have died of COVID so far. One person I know did die, in early September. (She is technically the second person I know who has died. I never met Fr. Tom Carten socially, at least that I was aware of - he once was a lurker at a gathering of bloggers - but my sister knew him well, and I was a big fan of his blog.) I met Joyce Dombroski Gebhart through one of the blogger/politician mixers that we used to have many years ago. She was running for public office on what looked like a pure Tea Party platform. She didn't win. We were on opposite ends of the political spectrum, but somehow she became aware of my interest in space and backyard astronomy. She would frequently contact me through Facebook to let me know about interesting events, from planetary alignments to bright passes of the space station. I reciprocated far less often. I have no idea if she was vaccinated, but her politics leads me to believe she was not. She went on a family vacation in the Summer. She and one or more family members contracted COVID. They recovered. She did not.

Earlier in the Summer it had really started to feel like COVID might soon be over. I got together with some friends in late May, for the first time in a year and a half, just as the CDC was announcing the lifting of restrictions for the fully vaccinated. I went to my first poetry reading since February 2020 on June 19, 2021. This was also an opportunity to see a friend I had not seen in well over two years. But everything felt - wrong. Off. The readings ran too long. I began to feel uncomfortable. All I wanted to do was get out of there and go home.

Later I went to a family gathering held outdoors at a cousin's house. At that point the Delta upswing had begun in earnest. But other countries had experienced the Delta variant, and had seen a rise followed by a fall. Sure enough, the Delta spike peaked in September, then began its downward slide.

I got together with my friends again in early November. Things seemed more uncertain then. What would the next variant bring? Booster shots had already begun, and I was the last of our group to get boosted.

On November 19 there was a lunar eclipse, exactly the sort of thing Joyce would have enjoyed. 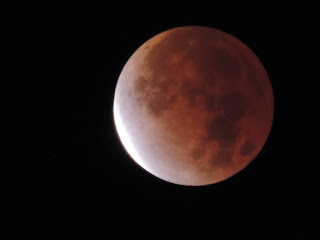 My immediate family - with the exclusion of my sister, who lives out of state - gathered for Thanksgiving, our first Thanksgiving in two years. Shortly afterwards we met again for my nephew's birthday. The day after his party I met with some friends whom I had worked with from 1999 through 2007.  We are all getting up in age - I am the youngest of the group - and all have pre-existing conditions that make us much more susceptible to the serious effects of COVID. Even though the Omicron variant had already been announced, the restaurant was fairly crowded with few masks in sight. This has been the rule since mask mandates were dropped over the summer: whenever I go out shopping, which isn't that often, I am usually one of a small minority of people wearing a mask. It is hard to look at these unmasked masses and not think of them as poor naive doomed fools.

Some planets lined up in the post-sunset sky in December - Venus, Saturn, Mars, and Jupiter. Venus once again entered a crescent phase. Many people who might not have otherwise seen the crescent of Venus saw it because of the alignment. Once again, something Joyce would have enjoyed.

Christmas came, and another family gathering, this time with my sister coming in for only the second time since we were all fully vaccinated.

I decorated our small Christmas tree fairly enthusiastically this year. I am excited about taking it down and boxing everything up, because I am already thinking about decoration variations for next year. While COVID may feel like the dominant issue in the world right now, Climate Change is the most significant issue now and will continue to be so for decades - maybe centuries - to come. December tornadoes in the South, firestorms in Colorado driven by 110-mph winds, droughts, floods, and record-breaking temperatures month after month. Here are forsythia and dandelion blossoms in my back yard two days after Christmas: 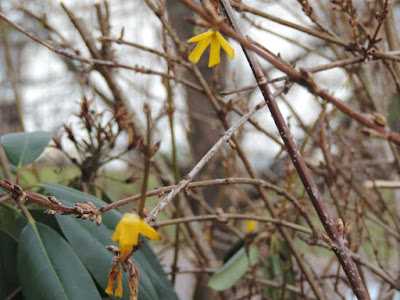 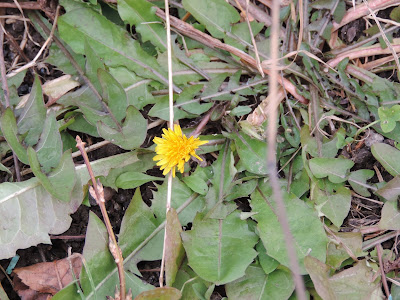 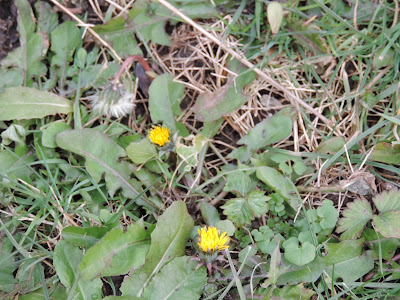 There is no denying the absolute horror that the resurgence of COVID has presented in the second half of 2021. Where once it looked like COVID had been beaten back into nothingness, it has now soared to unprecedented levels both in Pennsylvania and the U.S. as a whole. Hospitals are once again overcrowded with the unvaccinated sick and dying, to the point that more routine issues like dealing with broken bones, cancer, heart attacks, and other non-COVID issues are being put on the back burner. Even the vaccinated are getting infected with the Omicron variant. The difference is that many of the vaccinated who get infected are not dying or even requiring hospitalization, though their long-tern prognosis is unknown. But in the meantime, Republicans continue to push rejection of any vaccine in favor of post-infection treatments. 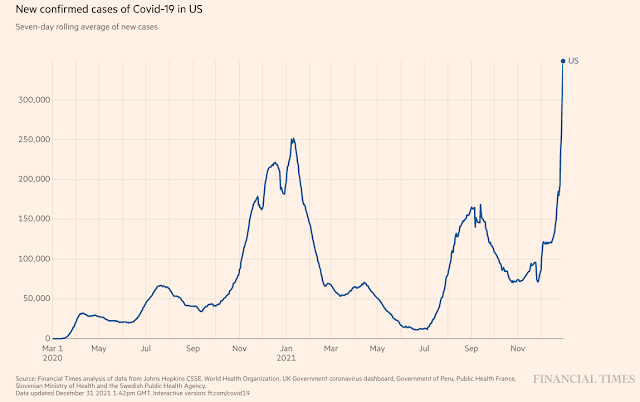 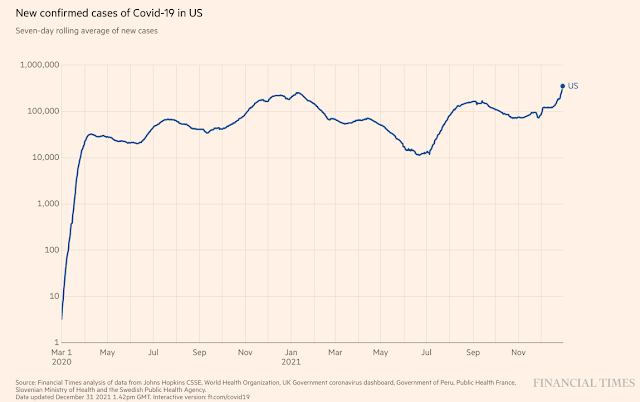 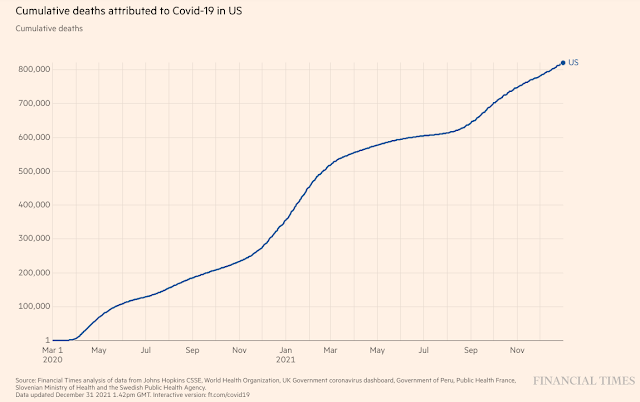 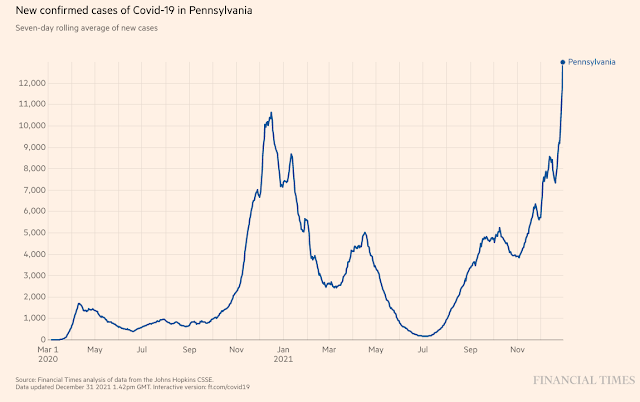 Which brings us to here. The end of one year, and the beginning of another. Over 800,000 Americans have died of COVID since the start of the pandemic. Russian forces are massed on the Ukrainian border, ready to invade and trigger a confrontation with the U.S. and NATO. Kim Jon-Un is strangely silent. I continue to work from home, though how much longer that will continue is unknown. None of my cats are sick or dying. None of my family or friends are sick with COVID.
Betty White died on the last day of 2021, just two weeks short of her 100th birthday.
Good riddance, 2021.
Posted by D.B. Echo at 11:59 PM No comments: