It seemed for a while my blog was just a series of obituaries for my animal friends. Hershey. Scooter. Nikki. Baby Boy. I wrote each one as quickly as I could.

Not this one. It has taken more than two and a half months to write Bowie's story. 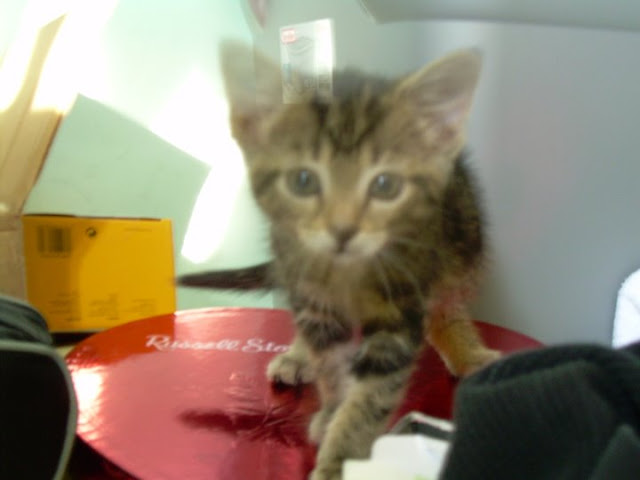 Bowie came to us in May of 2009. As a young kitten, perhaps six weeks old, she crawled into our house through a hole torn in the screen of a basement window. The first time she did this, my mom was able to retrieve her and return her to her cat-mommy, who seemed indignant that we let such a thing happen. A week later she crawled in again. I heard  her meeping cries from another room. As I entered the room with the window, I saw her holding onto the screen for dear life. She let out a scream as she let go and fell nearly six feet to the concrete floor behind an old stove. I was able to retrieve her using a toy robot arm grabber from Cracker Barrel. We decided that since she was so determined to be in our house, we would keep her. We named her Bowie, since she was The Cat Who Fell to Earth. 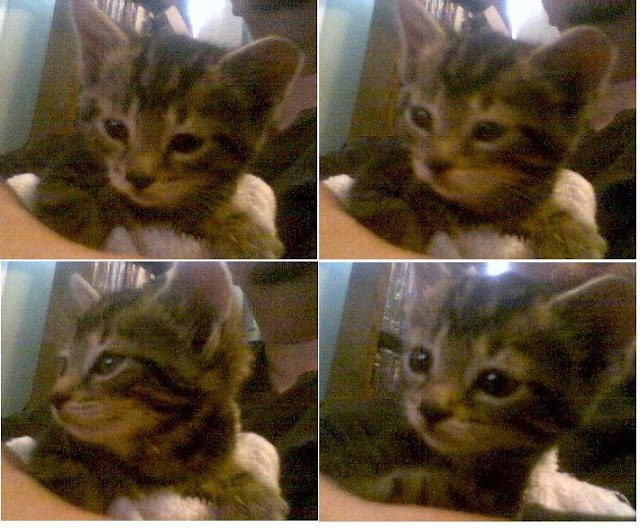 Soon we took in Bowie's brothers BlueBear and Thor, and then assorted cousins, nieces, and nephews. Bowie was the first of the "new" cats, but she never really asserted her position in the pecking order. She was tiny and shy and preferred to spend her days hiding (she was an excellent hider), or alone in the upstairs bathroom, or with my mother. She was one of the "Superfriends" - Bowie, Homer, and Scooter - three tabbies who would sleep in the upstairs bathroom, which my mom would keep closed at night. This was mainly to keep Scooter in a known spot overnight. He was never a totally well cat, and we were always worried about something happening to him while no one was around. If Bowie happened to get locked out, she would scratch at my mother's door in the middle of the night until she got up and let her into the bathroom.


And that was the situation for several years.

Last year Scooter died, and it was no longer really necessary for Homer and Bowie to sleep in the bathroom. But they had come to prefer it, so my mom kept them there at night. They were both very happy with the arrangement. They would both be there to greet my mom in the morning, and she liked that.

Bowie never really warmed to me. She never wanted me to pick her up. If I scratched her or petted her, she would make a querulous two-note cry that sounded like "Really?" (to which I would respond "Yes, really") and then run away just out of arm's reach. But then she would wait there, and allow me to approach her and scratch her again - on her terms. 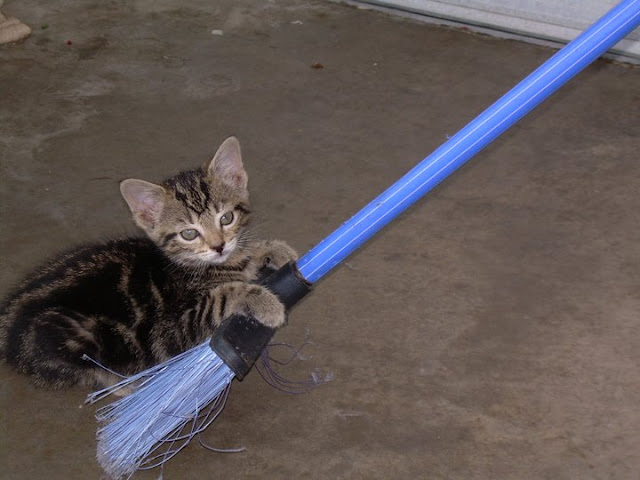 She started to throw up everything she ate in mid-May.

Maybe not everything. She held down some stuff, sometimes. My mom was convinced she was dying. I thought she was overreacting, being overly dramatic. I figured she just had a hairball, maybe just an upset stomach.

After nearly two weeks of her eating sporadically and throwing up daily, I was convinced. We decided to take her in to the vet on my next day off, which happened to be May 31.

About a quarter of a mile from the vet's, we were rear-ended at a flashing crosswalk as we stopped to let a woman pushing a baby stroller cross.

The car was still drivable. We were both wearing seatbelts, unlike the idiot who crashed into us. I was OK, I guess. Bowie was fine. My mom's arm was bruised and cut from being pushed against the opening of the carrier. (The story of the car and its repair and the various cars I rented while it was in the shop will be the topic of another post, maybe.)

We got to the vet's about a half-hour late. He took Bowie right in, performed an examination. Told us she had a large mass in her abdomen. A tumor. He offered to put he down on the spot.

We refused. She was still being a cat. We would not kill her just because she might become inconvenient in the coming weeks. And, given her size and the size of the tumor, it seemed likely that she wouldn't live more than a few weeks.

The vet gave her emergency hydration. He gave us an appetite stimulant and some special cat food. The food could be mixed with water to make a paste which could be administered with a syringe.

For the next seventeen days I administered a daily regimen of pills, food, water, Pet Tinic - anything to keep her going. She gradually got weaker and thinner. She would sit with my mother, or lay on the floor, or sit by herself on a chair. Her spine became bonier and more prominent - one of the sure signs of failing health in a cat - but, paradoxically, her belly seemed soft and full. Maybe that was the tumor. Maybe that was where all the food and water I was giving her with the syringes was going. 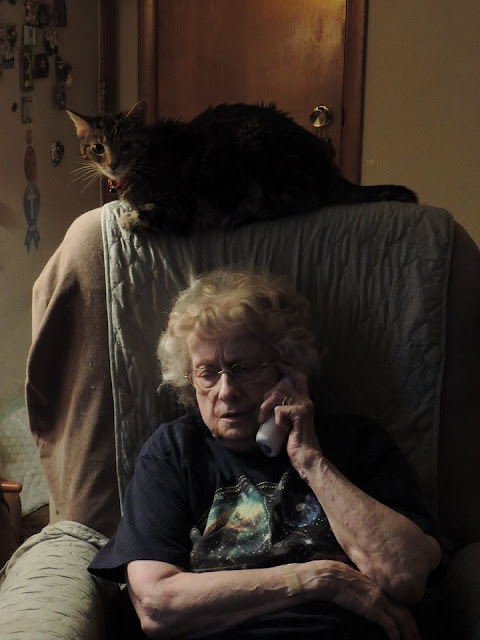 A few days before she died, I may have done the thing that killed her. 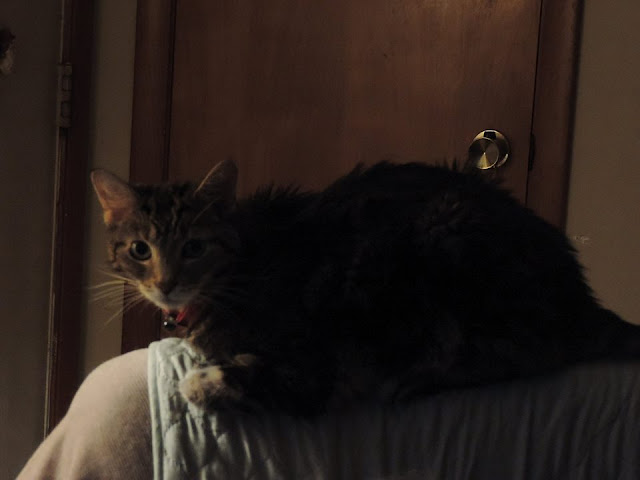 She never liked the syringes. But she wasn't taking anything on her own. The alternative was to just sit back and watch her die, or take her for a trip to the vet to have her put down. A friend who used to be a respiratory therapist always warned me about administering anything by mouth with a syringe. One wrong move could result in aspiration of the food or water, which could lead to pneumonia and death.

She would struggle against the food and the water. To her, it was the worst thing in the world. She would fight me, and then run away after I was done. As long as she could fight and run, I knew she had some fight left in her.

Five days before she died, as she was growing weaker and weaker, she reacted differently to the syringe. As I shot the quarter-teaspoon of liquefied food paste into her mouth, she snapped back and looked at me with a shocked expression, her mouth agape. A dribble of paste came out of her nostril.

I cleaned her up, as I always did after a syringe of paste, and worried about the paste in the nose. Had I just gotten it into her sinuses? Her lungs? I didn't know. I still don't.

Over the next few days I still gave her water and nourishment. Every morning I woke to expect to find her dead. But she was still alive. Each day my mom suggested that this was the day I should take her to be put to sleep before I went to work. But she would rouse, and run around, and jump on chairs, and fight me as I tried to give her food and water. As long as she could decide for herself where she wanted to be, what she wanted to be doing, I didn't want to have her put to sleep. 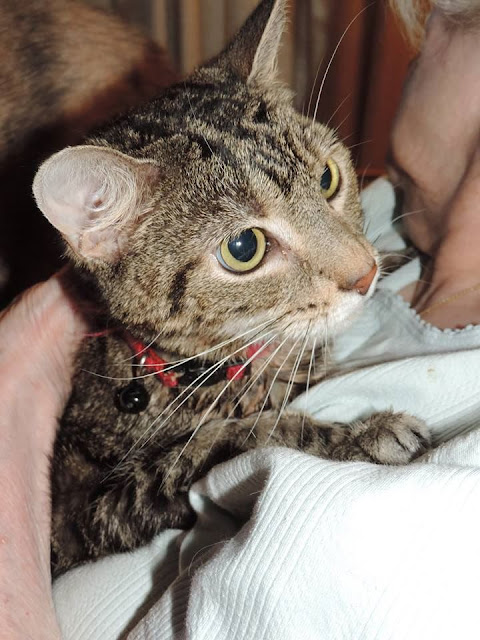 June 16 was my last day of work before a week's vacation. My shift ran 11:00 AM to 7:30 PM. I called my mom throughout the day to check on Bowie. During my first break, when I called, she was sitting on my mom's lap. When I called, she jumped off. Perhaps that action dislodged something or did something to her fragile system. Whatever the case, she lay down after that, and never regained consciousness.

She had been lucid and mobile until yesterday afternoon. Around 1:30 she jumped off my mom's lap, ran over to one of her favorite spots on the floor, next to my old Travelocity gnome, and curled up there. She never got up again. My mom picked her up and held her until I got home from work around 8:00, too late to take her to be euthanized. Her breathing was shallow and rapid, her heart was racing, her eyes open and fixed, and her pupils dilated and unresponsive. Her limbs were outstretched and her paws cold. I changed into nightclothes and took my mom's spot. I held Bowie all night long. After 4:30 AM she began to show changes, stretching her arms and neck to a new position, and I called my mom. Around 4:45 her breathing changed. Her heart stopped beating, and she took a few more spasmodic breaths, then curled herself into a more comfortable position and died.

We will take her up to be cremated this morning.

Coincidentally, our car, which was rear-ended as we took Bowie to the vet's for her diagnosis on May 31, is ready for pickup this morning at the body shop a block from the vet's.

And that was that. I picked up her ashes on June 22, after I recorded a bunch of episodes of the NEPA Blogs Blog of the Week at WBRE. Her little box is now stored with the boxes for all of her cat friends, and Hershey, and cats and dogs she had never met.

I miss her so much, even though I interacted with her so little. It hurts me to look at pictures of her pretty little face. She was so young. I thought we were going to have many more years together. But now I have written this, so that is one step taken in the process.