Yesterday Hurricane Sandy blew through the area. Really, it blew through much of the Mid-Atlantic - it was that big, it covered most of New York, New Jersey, Pennsylvania, Maryland, Delaware, Massachusetts, and Connecticut simultaneously - but locally it amounted to a lot of very powerful, sustained wind.

Work let out at 5:00 yesterday - waiting later might have risked having someone get killed by a falling tree on their way home - and I went straight to my house to try to secure the porch furniture. Last year, during Irene, the Adirondack rocker skated across the porch and jammed up against the railing, so I wanted to make sure the rocker and my rocker bench stayed put. (In the end I had to content myself with flipping them over and wedging them against the railing preemptively. It worked.) Upon arriving at my house, I opened my car door, held onto it by the upper door frame as I prepared to exit, and nearly had it torn out of my hand and twisted off its hinges by a powerful wind. I realized that the wind was going to be a problem.

We survived, at least locally. Hundreds of thousands of people nearby are without power due to downed trees taking out electrical lines. An eight year old boy was killed not far from here by a falling tree branch while trying to make sure the family pets were safe. Another person died of carbon monoxide poisoning while using a gas-powered generator inside his garage.

But my hometown is OK. I didn't see much damage on my drives today. Maybe we got away relatively unscathed.


Late Monday night, just before flickering lights made me realize I should shut down the computer, I heard a noise I've never heard before. It was a humming sound, like the sound a propeller-driven airplane makes when it flies slowly past. I wondered if perhaps some utility vehicle was idling just outside my house. After some thought I decided that I must be hearing the wind in the trees - specifically, the wind along the river blowing through the few remaining leaves clinging to the trees that line the riverbanks. The sound, I realized, was a lot like the sound you get when you blow through a piece of tissue paper draped over a comb, probably for the same reason. Friends on the other side of the river confirmed that they were hearing it too.

I've never heard a sound like that. I've read about certain hums and sounds that used to be audible when the world was a quieter place - including the almost-subsonic hum created when wind blows over mountains. I've always wondered what it would be like to hear such a sound. Now I have heard something related, and perhaps even rarer - the humming sound of wind blowing through mostly-denuded trees during a late-October hurricane in Northeastern Pennsylvania.

It's not just about the Presidency

Maybe you've heard: there's an election coming up in the United States in just a few weeks. Sometime after that (and I'm not going to say how soon - I remember the election of 2000!) we'll know whether Barack Obama or Willard "Mitt" Romney will be sworn in for a four-year term in November. (Unless, of course, one of the third-party candidates wins. Hey, it could happen. Maybe.)

The Etch-A-Sketch keeps getting shaken, and a nation of ADD sufferers keeps getting distracted by whatever the last thing was that happened or got said. (Joe Biden smirked and laughed at Paul Ryan through the debate! How disrespectful! Who ever heard of such disrespect at this level of politics?) Ultimately the decision as to who will be President will be made by the people who turn out to vote. That includes Romney supporters, Obama supporters, and the critical block of "undecideds" who, somehow, have not yet decided which candidate they support.

But the Presidential race isn't the only position that's being decided. Ultimately, all three branches of government are.

Congress has been incredibly ineffective in the last four years. Less than ineffective - Republicans in Congress, since Obama first took office, have been putting enormous effort into keeping any significant progress from being made. They fought every step of the way on Health Care Reform, forcing revisions and compromises and a continuous whittling away of the core principles that meant so much to Obama's supporters - and then turned around and rejected the end product, and crowed about how much time Obama had just wasted.

At this time we see a Senate with a slim Democratic majority, and the House with a sizable Republican majority. The election of 2010 saw many "Blue Dog" Democrats, Republican-leaning Democrats from Republican-leaning districts, swept away in favor of Tea Party extremists. It is tempting to blame all of the problems with inaction in Congress back to these Freshmen Republican ideologues from 2010, but as we can see with Health Care Reform, the problem predates the Tea Party successes in 2010.

If Romney wins the Presidency, he may not find himself well-served by Tea Party extremists. Perhaps the plan was for these individuals to harass and bedevil the Democrat in the White House, but I sincerely doubt that they got the memo indicating that they should stop in the event of a Republican moving into the Oval Office. Instead, I suspect, they will continue to demand that they get their way, and will engage in tried-and-true obstructionist actions if they don't.

A Democratic-majority Congress will work better for either candidate. If Obama wins, a Congress dominated by genuine Democrats - not the Blue Dog sorts - would be more cooperative with his goals. But if Romney wins, he might also find it easier to work with Democrats than with extremist Republicans of the Tea Party variety. And Democrats have a well-earned reputation for compromising, for sacrificing party goals in favor of the needs of the nation - something that Republicans will never be accused of, especially after these past four years. Romney might find himself having to fight less to get his agenda through if he is dealing with Democrats instead of Tea Party extremists.

Finally, the Supreme Court is in play. The Supreme Court is in play every Presidential election, but once again we find ourselves in a situation where the moderates on the court are nearing the age of retirement and/or death. Meanwhile, George W. Bush nominated relatively young ideologues like Roberts and Alito to the court and had them rubber-stamped in by his complying Congress - even sweeping Roberts, unexpectedly, into the position of Chief Justice, a position he's likely to hold for decades to come.

A Romney win would allow the makeup of the Supreme court to be shifted so far to the right that it will seem like Citizens United was a Democratic idea. On the other hand, an Obama win, particularly if the makeup of Congress does not change significantly from its current state, would likely mean more moderate appointments like the two he has made - both of whom faced furious opposition from Republicans. (It is, of course, possible that Romney could surprise everyone and make moderate appointments, but this would certainly cost him any support from Tea Party extremists, who would likely try to block any such appointments.)

On Tuesday, November 6, Americans will go to the polls and cast their votes. We need to realize that we are voting for much more than just the President.
Posted by D.B. Echo at 1:31 AM No comments:

Email ThisBlogThis!Share to TwitterShare to FacebookShare to Pinterest
Labels: Politics 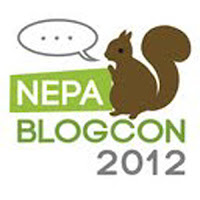 The first-ever NEPA BlogCon took place Saturday, September 29, and it was a smashing success!

To be clear about this: I had nothing to do with the planning or execution of this event. When Karla Porter and I got to talking at the Fall 2011 BlogFest about having some sort of non-political get-together of bloggers - BlogFest was originally conceived as a political mixer, and the founders have made efforts to make it less blog-focused and more politics-focused - Karla began talking about a blog conference of some sort held at one of the many local institutes of higher education, with panels and educational sessions and all the stuff associated with a convention. I immediately backed away from the idea as being too complicated and too burdensome - especially for someone whose top priority at the time was to find full-time employment of some sort.

Six months later, Michelle Hryvnak Davies and Karla Porter connected at the Spring 2012 BlogFest and revived the idea. Michelle was enthusiastic where I was reluctant. They brought on board two other bloggers in attendance at the BlogFest, Mandy Boyle and Leslie Stewart, each of whom, like Michelle and Karla, brought with her extensive blogging experience, technological expertise, and a personal social and online network that partially overlapped with the others. By the next day the four had dubbed themselves the "Fearsome Foursome," and threw themselves at planning the first-ever NEPA BlogCon.

There was a lot to plan, and a lot to arrange, and a lot of decisions to be made. Through an enormous amount of very hard work, the four of them brought in speakers from throughout the blogosphere and the world of online commerce, arranged a location for the event at Luzerne County Community College in Nanticoke, secured sponsors and purchased supplies and brought in dancing girls and...

Well, I didn't really contribute nothing. I did construct a series of image macros to be used for promoting the event: 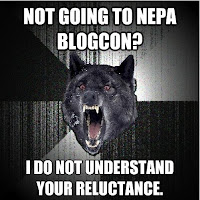 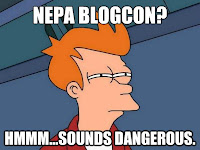 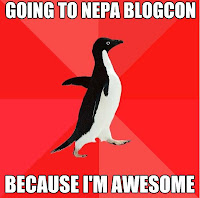 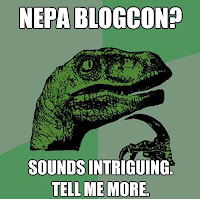 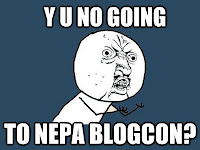 ...but that was pretty much it. I wanted this to be a blogging event where I could take part as a participant, not a planner. And I didn't want to butt into anyone else's plans with my own harebrained idea.

The event itself was astonishing. I was confronted with a sea of unfamiliar faces, which anyone who knows me realizes is nothing new. But in this case it was legitimate: Aside from the Fearsome Foursome, I knew a handful of the presenters. But many of the bloggers were strangers to me.

At the Spring 2012 BlogFest, as a result of a huge promotional campaign and media blitz by Michelle, we had the best-ever turnout of bloggers - perhaps two dozen or so, including the three political bloggers who organize the BlogFests, Michelle, and me. Without the media blitz and promotional drive (out of respect for the founders, who felt that the BlogFest was in danger of losing its political character and becoming too blogger-focused, which is a little confusing in light of the name, but whatever), last week's Fall 2012 BlogFest saw about half that many bloggers - maybe a dozen, all told, including the three organizers, Michelle, me, Karla, Justin Vacula, political bloggers Dan Spak and James O'Meara, and a few others. Maybe not even a dozen.

NEPA BlogCon had something like one hundred bloggers in attendance. (I'm still waiting official totals.)  And they weren't just from NEPA. Some came from as far away as Delaware and New York. Some might have come farther.

The sessions were informative and well received. Some were more basic than others, which was a good thing, because some of the bloggers in attendance were experienced, and some were just starting out.

The Fearsome Foursome passed out surveys at the end of the sessions, asking for feedback on the event and suggestions for sessions at future events. My suggestions were these:
BlogCon was a tremendous success, and the credit goes to everyone who helped make it happen, but especially to the event's four organizers: Michelle Hryvnak Davies, Karla Porter, Mandy Boyle, and Leslie Stewart. I'm already looking forward to the next BlogCon! 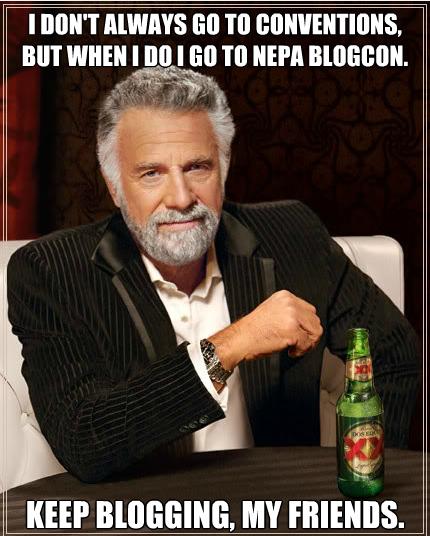