Our furnace crapped out yet again during the coldest time of the year.

I don't know if furnaces are more likely to fail when they are most needed, or if already-existing issues only become obvious when temperatures drop. We had been noticing irregular heating throughout the house for a while: some rooms hot, some rooms just barely warm. Still, temperatures were generally in an acceptable range, and never below 70 degrees F (21 degrees C.) Until yesterday, that is.

Long story short: it was the circulating pump, again. Just like in 2016. The repairs were performed by Carpinet Plumbing & Heating under a HomeServe service contract. Other repairs had been done in 2007 and 2006. Once again, we've been advised there's no preventative maintenance to do. I guess we'll keep an eye on the temperatures, and call again before temperatures drop so low.

Email ThisBlogThis!Share to TwitterShare to FacebookShare to Pinterest
Labels: Furnace, House and Home

The Color of Snow at Sunset

I went on another wild goose chase this Thursday. I've documented this sort of thing before. This was actually the second one I've been on in the past two weeks - and both have involved an antique ceramic Christmas tree made by an aunt many years ago.

The first chase involved the search for a replacement star on December 3 and was documented on Facebook. (I have included this at the end of this post for the sake of completeness.) Shortly after I secured the new star, the rotary switch on the cord for the ceramic Christmas tree gave up the ghost. I took the assembly apart and was able to disconnect the cord. It was obvious I would need to replace it. Fair enough; I had bought replacement electrical cords before, many years - err, decades - ago. How hard could it be to find one?

On Monday I tried Lowes. No luck. They had a replacement cord and socket for a candelabra-sized bulb, and a "bottle lamp" kit, with more stuff than I need. (They also had a few empty spots on a rack that might have been for replacement cords, but I couldn't be sure.) I made plans to visit The Lamp Factory and maybe Home Depot. My mom suggested Friedman Electric.

I wasn't able to go searching again until Thursday, December 14, after I recorded a bunch of segments for the Blog of the Week spot on WBRE's PA Live. (My segments have been on tape for the past few years.) Friedman Electric in Wilkes-Barre is not in an obvious location. I sort-of wandered and followed my nose a bit until I stumbled over it. No luck there. The guy at the counter offered to build a lamp cord for me, but suggested I try the Lamp Factory.

It turned out The Lamp Factory had what I was looking for, but only in the back; they basically had to get one from their repair guy. (For the sake of completeness, I checked Home Depot and found that they had a section just for lamp replacement parts. Their replacement cord was slightly more expensive than the one I bought at The Lamp Factory, but it seemed to be a heavier gauge wire.)

I got to the studio to record my PA Live spots at 2:50 PM. I parked at a meter on the street, and put an hour's worth of coins in. We got a late start, but still managed to record twenty spots between 3:15 and 3:45. I hung out a bit afterwards to watch a children's group (who had been my audience during the recording) go through a sound check for their performance on the show later. I thought about sticking around to watch the show live, but suddenly remembered that my meter was running out. I got to the car as the meter was flashing "-0.00" but before I got a ticket.

I pulled out of the spot and headed past WBRE. I saw someone standing outside the back entrance too the studio with a reindeer. "Awww, they got a friggin' reindeer," I thought in my best Carl Brutananadilewski voice. (Candice Kelly later assured me on Twitter that the two reindeer were indeed glorious.)

After some wandering, trying to remember the location of Friedman Electric, I stumbled across the place by accident a little after 4:00. I was out of there a few minutes later and headed off to The Lamp Factory, located on the other end of Wilkes-Barre, Wilkes-Barre Township actually, practically in Plains. I pulled into the parking lot as the sun was setting behind the Western mountains of the Wyoming Valley.

And then I saw the snow pile. 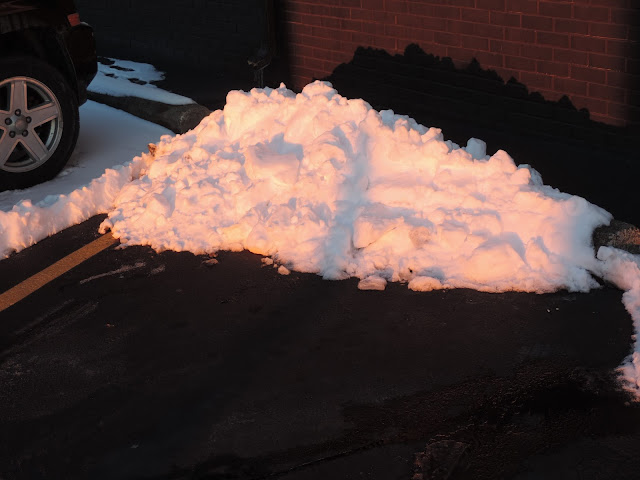 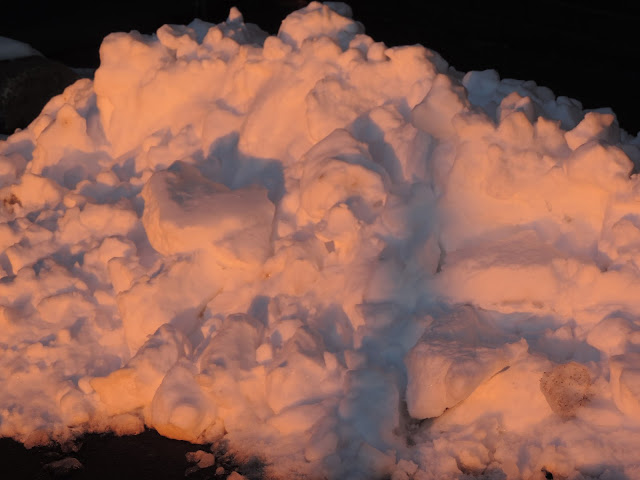 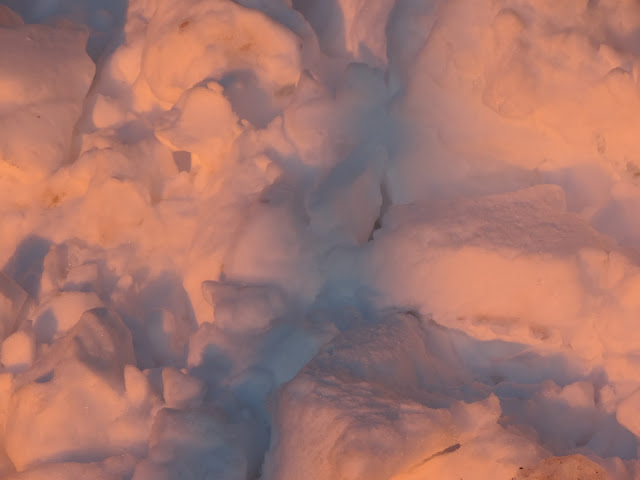 This is something most people don't realize. We think of shadows as black, or at least gray. They are not - at least, not usually. In most environments we encounter, we aren't dealing with a single light source. In the outdoors, the sun is the primary light source, but its light is reflected all around us: off buildings, off clouds, off any object it hits. Sunlight is also refracted in the air, causing the sky to glow a glorious blue under the right circumstances. All these things provide secondary light sources, even when no artificial illumination is present.

Shadows appear when a light source is blocked. Parts of the snow pile were blocking the setting sun, keeping the orange-gold light from reaching the shadowed regions. But those regions were still being illuminated by the glowing sky. And so the regions in shadow took on the color of the blue sky illuminating them. 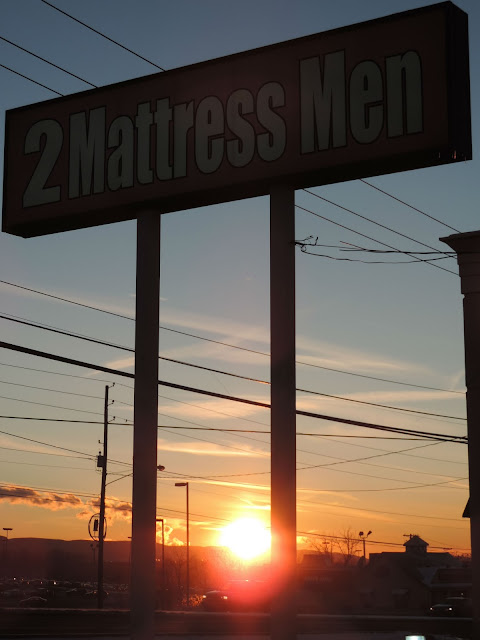 I only spent a few minutes in The Lamp Factory, and walked out with a replacement lamp cord, which I used to repair the ceramic Christmas tree. By then the sun had slipped completely below the horizon, and the pile of snow was now a dim gray.

The search for the ceramic Christmas tree star, as documented on Faceboook, December 3, 2017:

The stem of the plastic star topper on our antique ceramic Christmas tree broke, so I set out to find a replacement. I remember seeing the "bulbs" at A.C. Moore in Wilkes-Barre years ago, but that location has been closed for several years. Friday after work I stopped at Michaels in Wilkes-Barre. I spent quite a bit of time prowling the place without luck, and all of the available staff were apparently working the registers behind a cordoned-off area and dealing with a long line of people waiting to check out. (I had to squeeze past these people and the registers just to leave empty-handed.) Friday night I checked online but could not find any indicating they were available at a bricks-and-mortar location, and most wanted an outrageous amount for shipping or were sold out through next February. Saturday I checked Dundee Gardens, and they suggested I try Christmasland at Main Hardware, which had a box of very reasonably-priced "bulbs" and "ornaments" but no toppers. Finally, after last night's edition of The Writers' Showcase at the Old Brick Theatre, I decided to try A.C. Moore at Dickson City. It was already nearly 9:00, but Brian Fanelli suggested they might be staying open late for the holidays. I made it there by 8:55 and they showed no sign of closing. After several passes, I approached someone at a well-marked customer service desk, who was able to direct me to EXACTLY WHAT I WAS LOOKING FOR! Thanks, A.C. Moore, and thanks to your helpful employees! I hope you come back to Wilkes-Barre soon!