The Dinosaurs of Country Junction

I haven't been to the Lehighton location since the original building was destroyed by fire back in 2006. But I know back in the day that I would stroll through that shop I would stop to admire the dinosaur statues that were mixed in with their taxidermy animals and statues of Charlie Chaplin and the Blues Brothers, and the Tyrannosaurus head mounted next to assorted bison and water buffalo and other largish creatures.*

The Wilkes-Barre location, the only other Country Junction I have visited, also featured a great many dinosaurs, inside, outside, among the furniture, everywhere. Not all at once, but you could usually count on running into a Velociraptor or two somewhere in the store. At least, before it, too, was heavily damaged by fire on Thanksgiving Day in 2008.

Back in January I photographed this fine fellow standing guard outside the front entrance. 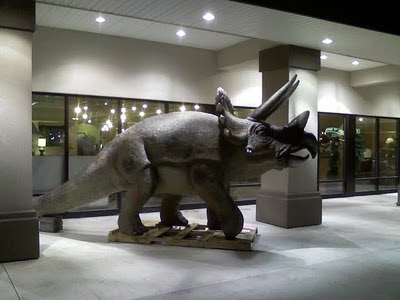 It's a Triceratops - which, despite what you might have heard, is not getting excised from the dinosaur books. I can't vouch for the general accuracy of this representation, though I can tell you that the beak and horns probably didn't have that fossilized appearance on a living specimen. 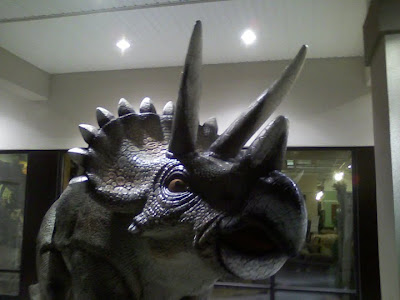 The price tag informed anyone interested that they could purchase this dinosaur for the low, low price of $1900.00.

I can't remember if I have been back to the Wilkes-Barre Country Junction since that visit in January. But I stopped in at the end of July with one goal in mind: to find and photograph dinosaurs. I was thwarted in this effort by the pronounced lack of any dinosaurs...until I spotted this guy as I was leaving the store. 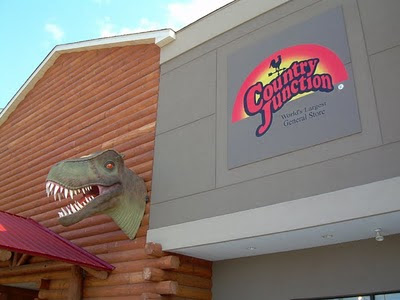 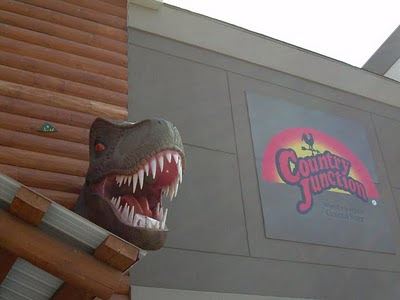 The inside of his mouth is wonderfully (if not necessarily accurately) detailed, from the ridged roof of his mouth to the oddly banded tongue. And in his mouth... 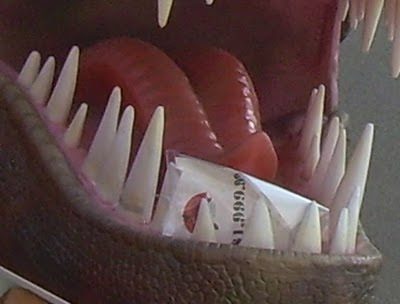 I hope there will be more dinosaurs visiting the Country Junction in the future. And I hope that if they do stroll by, I'll have my camera ready!

*I have no idea if these animals are the real deal or every bit as simulated as the dinosaurs.
Posted by D.B. Echo at 10:53 PM