While the big news for amateur astronomers right now is the visit from Comet Lovejoy, other stuff is going on on the heavens. Venus and Jupiter are currently putting in a beautiful appearance after sunset. I have seen Mercury before, but it's nice to have something like this to remove any doubts about what you're seeing.

I saw Venus and Mercury together late Saturday afternoon. They were technically at appulse, the point where they appear closest together in the sky. Today was another clear day, so I was hopeful that I would get a clear view. I knew I would be near Montage Mountain in Moosic tonight at sunset, so I packed my camera and tripod to see if I might get a good shot of the pair. 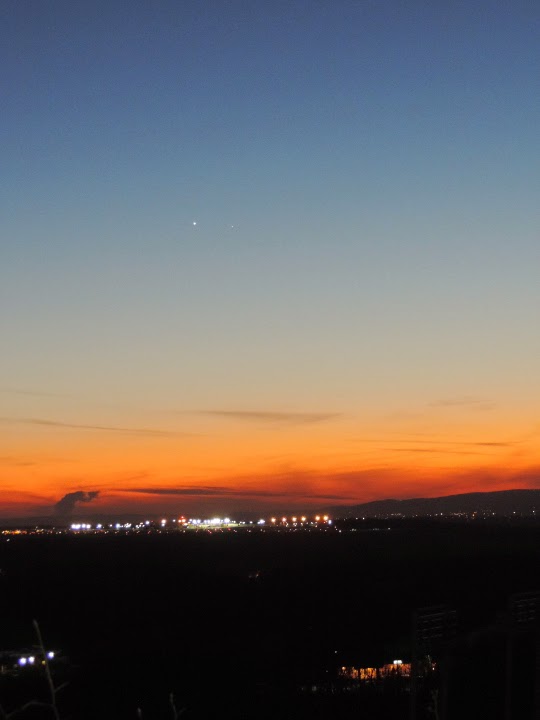 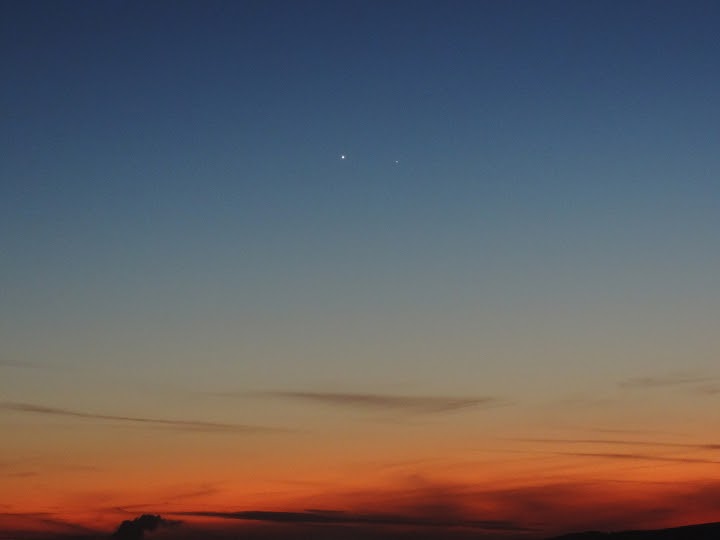 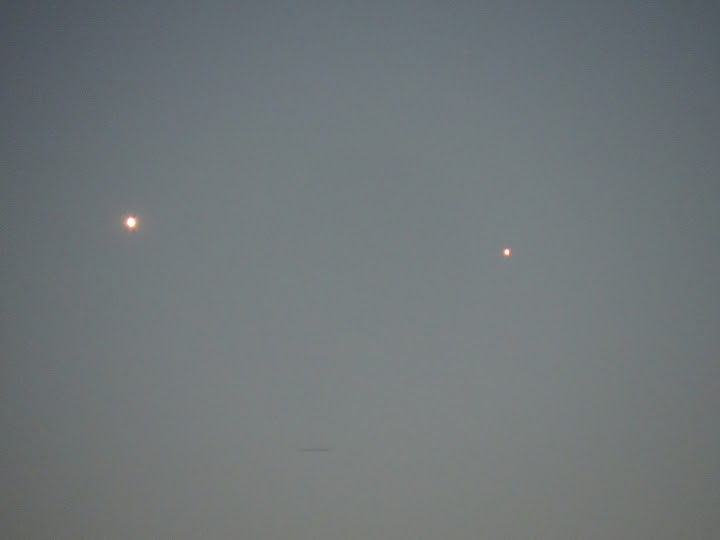 That's Venus on the left and Mercury on the right. If Mercury looks lopsided , it's because it is. Here's a map of the apparent disk of Mercury at approximately the time the photo was taken, according to http://aa.usno.navy.mil/data/docs/diskmap.php . 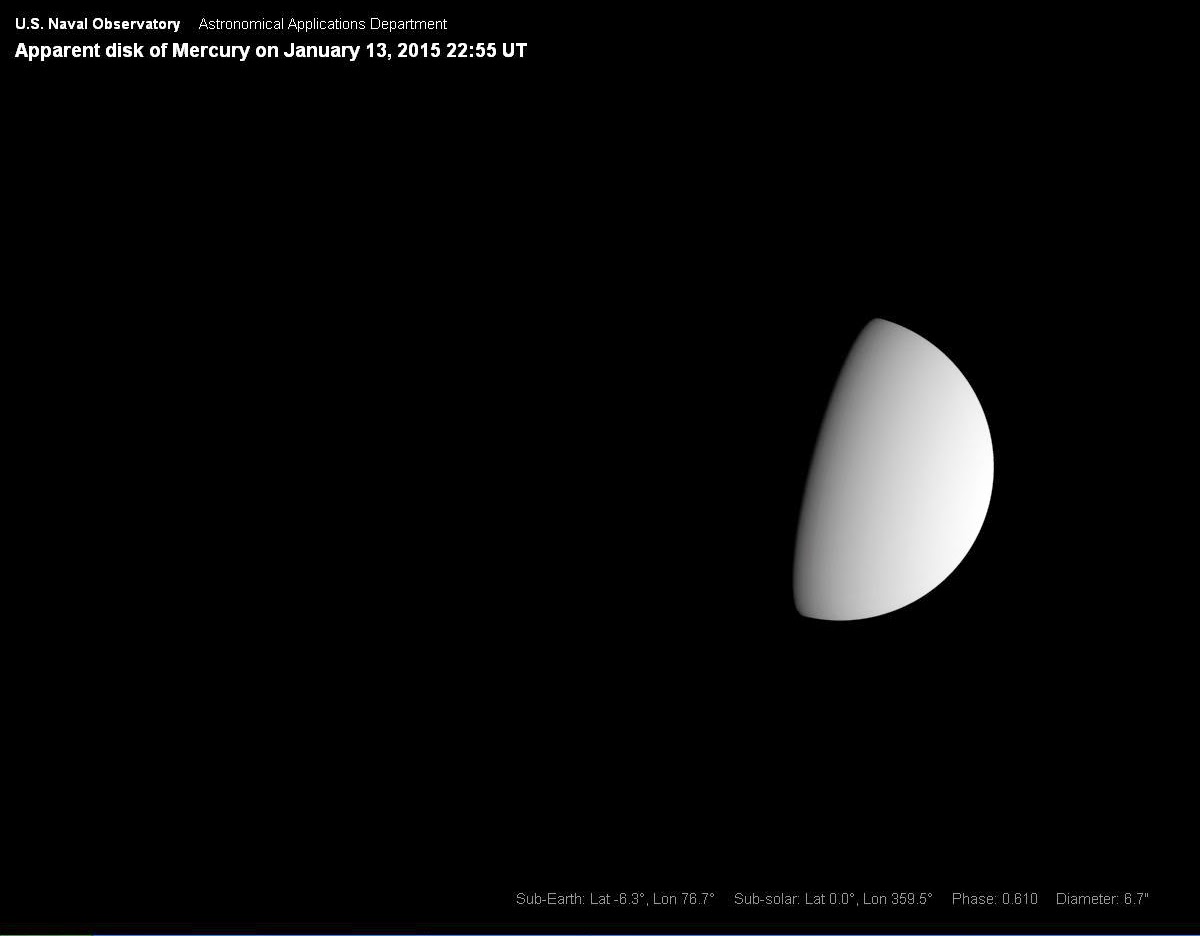 Venus and Mercury will continue to put in appearances after sunset for a while. Go out and see them if you can!

Thursday is garbage day in this part of town, usually. But when a holiday falls on or before Thursday in any week, the schedule gets offset by a day. Today is Thursday, and it's also New Year's Day, which means our garbage will get picked up tomorrow.

I happen to have the day off, which means I can take the garbage out throughout the day, rather than after work. I was hauling out the first bags at 3:23 this afternoon when I heard the BOOM.

It was a low, deep, loud rumble, like thunder, or at least like the beginning of thunder. It didn't have the rolling sense of thunder, the changes in tone or volume, or any sort of crack to it. It would have been odd for it to be thunder, as the day was clear and cold and the sky was a nearly cloudless crystal blue. It was loud, though, disturbingly loud.

My friends started to respond:

I heard it too although I didn't pay any attention to it until I saw you mention it here.

Definitely sounded like an explosion...I'm sitting on the couch and I actually felt a vibration!

We heard it too. At first we thought it was a car accident but checked around and nothing.

Sorry my bad. I had Taco Bell for dinner last night

Sure it wasn't somebody setting off some home made stuff?

I heard it as well. That's so weird.

you're in Dallas, right? That makes me think sonic boom, exploding meteor, or something else well above ground level. We have some mountains between us and you!

Yep, Dallas. That's crazy. I thought of thunder at first, too.

People on Hanover and Washington heard and felt it. Just read a post.

(Friend from local news station) We're checking into it. Haven't heard anything definitive.

We also heard it in Nanticoke and the pipes in the house shook.

(Friend from North Carolina) Well don't leave us hanging here. What was it?

Still no idea. We have contrails all the time. Lots of jets - military ones - are able to break the sound barrier, and some hot-dogger might do so over Northeastern PA without a second thought. Sizable meteors blow up in the atmosphere every day, though usually over the ocean or over sparsely-populated areas, since that accounts for most of the Earth's surface. Could have been some prankster setting off a haul of unused fireworks all at once, or a house succumbing to a gas leak. Maybe just business as usual at a fracking site tens of miles from here. Who knows? Folks are looking into it, though.

Likely a giant Quarantid Meteor. Several sightings already all along the East Coast.

This is the third time I've heard a big explosion like this.. The first two were covered in this post:

Things that go BOOM in the night

On the night of Saturday, September 14 at approximately 9:58 PM I heard something go boom...

So. There you have it. Still don't know what it was. I'm seeing reports of an East Coast fireball from last night, so maybe this is from the same meteor shower. Maybe we'll never be sure.

Earthfiles.com: Loud, House-Shaking Boom Heard and Felt Throughout Luzerne County, Pennsylvania
http://www.earthfiles.com/news.php?ID=2266&category=Environment
Includes a link to this post, and an archive of entries about other mysterious sounds heard all over the world.

Mystery Booms Heard Across the U.S.
http://poleshift.ning.com/m/blogpost?id=3863141%3ABlogPost%3A915691
An older article with frequent updates. They seem to have drawn a one-size-fits-all conclusion that I don't endorse or concur with. While the Earthfiles site is downright Fortean -  something I rather enjoy - the Poleshift site seems to be more crackpot in nature, as can be seen by checking out other entries on the site.

I've long been fascinated by mysterious sounds that have been heard, well, pretty much forever. Some are sounds that have been lost in our modern, noisy world: the hum of wind passing over mountains, or the similar hum of the tide rubbing against the shore - though hums are still reported today. I once heard an enormous hum as the remnants of a hurricane blew through the area in late October 2012, a time when many leaves were still firmly attached to trees despite the lateness of the season. Others, like the fairly well-known "Seneca Guns" (a booming noise heard near Lake Seneca in New York) have been combined in a single Wikipedia entry for "Skyquake," which covers phenomena exactly like the one I heard.

Could there be absolutely mundane explanations for this? Of course. Early on the morning of January 3, as I let my dog out to do his business, I heard a series of "ba-bang" noises in the distance, much like the lid of a dumpster being dropped closed. And this might have been exactly that, from one of two industrial sites (a boot factory and a junkyard) that are just half a mile or so away on the outskirts of Nanticoke. Maybe some employee, annoyed at having the garbage detail in the early morning hours of a Saturday, performed his task as noisily as possible. Maybe some forklift operator had set down their load less gracefully than anyone would have liked. Maybe a bear had broken hibernation and was looking for an early-morning snack in a dumpster. Or maybe it was a truck hitting a pothole on nearby Route 29 and driving along. Traffic on this road has always provided a background noise in this part of Nanticoke. Actually, Route 29 is close enough that as a child I would eagerly watch for the orange flash of my father's Volkswagen to know that he would be home in a few minutes. The sound is, as Tom Petty describes highway noise in "American Girl", "like the waves crashing on a beach."

At around 2:00 PM on January 3, Columbia County EMS reported a sound like an explosion that rattled windows throughout the area. Again, this could be anything: a sonic boom, distant thunder, an exploding meteor, somebody playing with explosives a discharge at an industrial site - anything. The lack of a house reduced to matchsticks or a mushroom cloud over a fracking site would rule out certain possibilities. It seems odd that there would be two of these incidents within three days within the same vicinity. But maybe these noises are being heard all the time, and most people are simply dismissing them rather than asking the simple question, "What the hell was that?"