UPDATE, Wednesday, August 11 (The day before the scheduled hearing):

Just a day after the Environmental Protection Agency moved a regional, stadium-style hearing on a landmark study of hydraulic fracturing from Binghamton to Syracuse, N.Y., the agency announced Tuesday the meeting is now postponed.

EPA officials said the event, which was expected to draw thousands on Thursday, will be held in upstate New York in September and the agency is looking for a new location.

(read the rest of the article here)

So, now people who changed their reservations from Binghamton to Syracuse now have to change them again to some unknown future location. Stay tuned for further developments. I expect that all future announcements will also be made at the last minute.

Everything that follows is now obsolete:


Here's a story I first read about yesterday on the Susquehanna River Sentinel. (That post is no longer available for some reason.)

A regional hearing to be held Thursday on a landmark Environmental Protection Agency study of hydraulic fracturing has been moved from Binghamton to Syracuse, N.Y., the agency announced Monday.

The hearings on the controversial natural gas drilling process, which are expected to draw as many as 8,000 participants and protestors including many from Northeast Pennsylvania, will be held in the Exhibit Hall of the Oncenter Complex Convention Center in Syracuse, after the EPA and Binghamton University, the initial host site, disagreed on a venue.

(read the rest of the article here)

For those of you not familiar with this area, Syracuse is about seventy-five miles north of Binghamton, occupying a latitude farther north than even Buffalo. It is also on, or possibly outside, the border of the region considered to be Marcellus Shale territory. Here's a helpful map taken from syracuse.com: 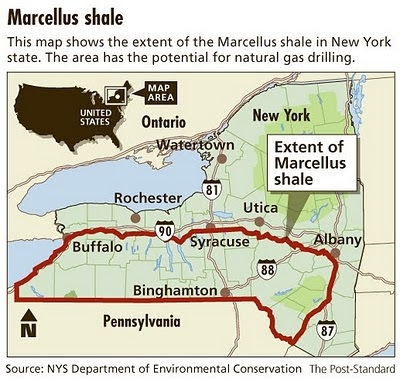 For reference, I do not believe Nanticoke would even appear on this map. Note that, despite what the map implies, Marcellus Shale territory does not end at the southern border of New York State. Which is the problem: the long-announced meeting slated for Binghamton on Thursday was expected to attract thousands of interested people from across the broad swath of Pennsylvania that will be affected by Marcellus Shale drilling. Many of those people booked accommodations in the Binghamton area. And now, with days to go, they have been informed that the hearings have been moved an hour north of where they will be staying. Would they like to do a last minute reservation change, with all the costs and hassles associated with that? Or perhaps they might prefer to keep their current accommodations and commute from Binghamton to Syracuse and back again, a round trip of about one hundred and fifty miles?

And what about the folks who were planning to commute from throughout Marcellus Shale territory to Bighamton? Will they be willing and able to make that extra seventy-five mile hike up to Syracuse?

Someone more conspiracy-minded than I am might see this as an attempt by the EPA (or whoever is calling the shots) to thwart public participation in this hearing. Other venues were surely available, even throughout the Wilkes-Barre / Scranton area. Why shift this meeting to the very edge of the region affected by Marcellus Shale drilling?

I won't be going. I wasn't planning to go, and I am technically scheduled to work that day, even though I will almost certainly be laid off. By the rules of Unemployment, I must be "able and available" to work - not sick, not on vacation - or actively seeking out work in order to receive unemployment compensation. I do know someone who is a Marcellus Shale insider, who, if I were to simply flip a bit from "opposed to" to "supportive of," could possibly get me a job in the industry. Anyone who knows me knows how likely that is. So I could not in good conscience claim to be attending this conference looking for employment opportunities. (With the EPA? Maybe. But my stated opposition to the extraction methods being used, and the reckless disregard for both the environment and the safety of locals exhibited by too many of the companies involved in this industry, may disqualify me from any future employment there.)

If anyone reading this does go, I look forward to ground reports.
Posted by D.B. Echo at 10:43 PM

DB - Now it's been postponed until September. I wrote a brief note voicing my displeasure about the last minute change, and I guess they listened. Sorry about the missing post; I tried to get creative and it backfired. Think I'll go back to my old posting software....

Oh for crying out loud. Now anyone who changed their reservations from Binghamton to Syracuse got double-screwed.

Don, I think Blogger is extremely valuable for the ability to actually link to posts - you're not talking about switching back to your old blog posting format, are you? I think your "headline" feature is neat, but thiose headlines should just point to regular posts in the body of your blog. Otherwise it seems that these "above the fold" posts disappear pretty quickly - even from your archives. (I had a direct link to your vanished post on my Facebook page, and now it just goes to the main blog page.)