Seven days of nature photos, day 4: Moonrise over the Susquehanna 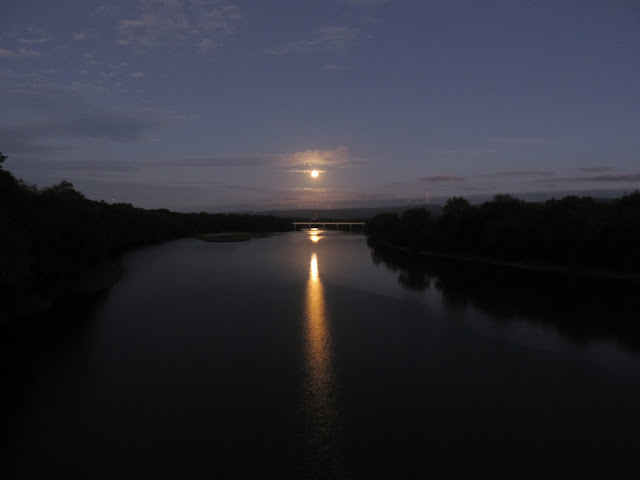 Of course I had to include a Moon photo in this series. It was hard to decide on which one to post. Ever since I got my new camera back in 2014, a camera that allowed me to take decent photos of the Moon for the first time, the Moon has been my favorite photographic subject. I even created a whole blog dedicated to it.

This particular photo was part of a larger effort. It was taken September 27, 2015, the night of a total lunar eclipse. I set myself up on the Nanticoke-West Nanticoke bridge, in a location near to where I photographed the shadow of the Earth, hoping to photograph the full Moon rising. I was thwarted by a thick layer of clouds, but eventually the Moon broke through and I got this and many other photos.

The original of this photo, as well as the story of what went into getting it, can be found here.

Seven nature photos, day 3: The shadow of the Earth 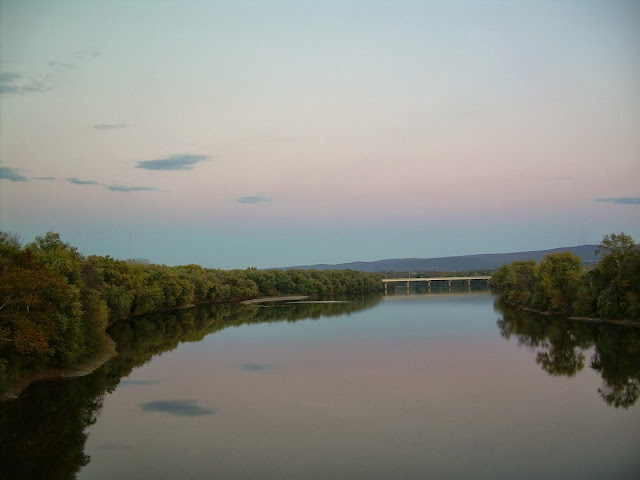 Like yesterday's entry, the shadow of the Earth is a not-very-rare phenomenon that is nevertheless seldom seen. It is visible on pretty much any relatively clear day just before sunrise or just after sunset. The trick is, it's on the side of the sky opposite the sun. So you need to have the sunrise or sunset at your back to see this. As a bonus, just above the shadow of the Earth you will see a bright pink glow known as the Belt of Venus - the reflected light of all of the sunrises or sunsets taking place just below the opposite horizon!

Like yesterday's Sun Pillar, the shadow of the Earth and the Belt of Venus are featured prominently in a short story I've written - as is the bridge from which these pictures were taken. See the full entry from which this picture was taken - including photos of the bridge itself, and Venus at play in its girders - here. 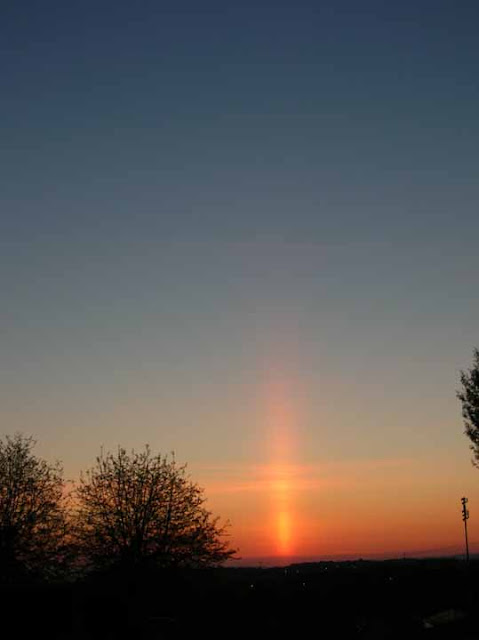 This second photo is from a post dated April 23, 2006, but was actually taken May 10, 2005, making it more than four months older than yesterday's image. A sun pillar is an amazing and beautiful optical phenomenon, not especially rare, and visible shortly before sunrise and shortly after sunset when the conditions are just right. I have woven a short story around a sun pillar, among other things. And, as always, there was more going on here than just what's in the photo: This was taken during a walk with my dog Haley, who would die of lung cancer just two weeks later. You can read all about it in Untold Tales: The Sun Pillar.

Seven nature photos, day 1: The Lurker in the Roses

A friend on Facebook has invited me to take part in an online exercise, to post seven nature photos in seven days. This is an easy enough challenge, but he further suggested that I do it using photos from posts on my blog.

I decided to take up this challenge, starting with my earliest posts and working my way forward. I was a little surprised to find that very few of the 172 posts from 2004, my first year of blogging, contained any nature photos. 2005 did a bit better, and I found myself with several candidate posts.

I selected this image: 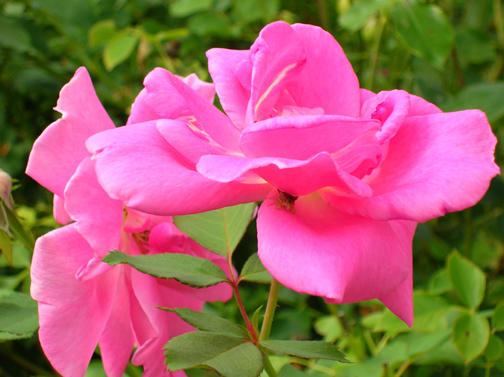 It's a simple enough photo of a rose from the Royal Highness bush I had planted a few years earlier, back in the late summer of 2001. But it was taken on the day my father died, so there's a story that goes with it. And there's a surprise hidden in the image, something I had never seen before, and have never seen since. You can read all about it in my original post, The Lurker in the Roses, from August 30, 2005.

On Saturday, February 27 I will be one of the featured readers at the Winter edition of the Writers' Showcase. It will take place at The Old Brick Theatre, 126 W Market Street in Scranton, Pennsylvania from 7:00 PM - 9:00 PM. Admission is $4.00. Readings will include poetry and prose. I will be debuting a brand-new poem that night. Come on out and see (and hear) us!

All Winter in a Day

This past December was exceptionally mild to the point of being warm, on par with the rest of 2015, which was the warmest year on record. Some plants broke their dormancy and started to bud out. Critters that should have been hibernating were out and about. Even some insects flitted around, doing whatever it is that they do.

Christmas Eve was exceptionally warm, but the warm spell didn't last much into the new year. More seasonable temperatures inflicted themselves upon Northeastern Pennsylvania by mid-January, causing much grumbling.

Early in the third week of the month meteorologists were calling for a weekend storm. "Too soon to call," said some. "Not sure how much, but something is sure to happen," said others. "PANIC!" cried others, and the people panicked.

For some people, panic was a smart move.

The storm crawled its way across the country, building strength, drawing moisture from the Gulf of Mexico. It hit the South first, disrupting air traffic on Thursday in places like Raleigh and Charlotte before gathering more moisture from the Atlantic and looping back in a clockwise Nor'easter punch aimed at the Mid-Atlantic seaboard.

By midday on Friday, January 22, meteorologists had a pretty good idea of what the storm would look like for Northeastern Pennsylvania. It would hit that evening and drop light snow overnight, with the heaviest precipitation on Saturday. The snow accumulation would have a sharp gradient in diagonal bands stretching from the northeast to the southwest; the farther to the south and west east , generally speaking, the more snow you would get.

And so it happened.

Scranton got from a dusting to an inch and a half. Williamsport, where a friend had just had a baby, got nothing. Nanticoke received between four and six inches. Hazleton got over a foot.

The worst of the storm seemed reserved for major communities closer to the ocean, though it may simply be those places that are getting the most coverage. Washington, D.C., already crippled by their lack of preparedness for the light snow that fell on Friday, was buried under and paralyzed by about two feet of snow, as were Baltimore, and Philadelphia, and New York, which had been expected to be spared the worst of it and instead received near-record accumulations. Even Boston, for which some forecasts had been predicting zero inches, got a sizable accumulation. Stone Harbor, New Jersey, where I have vacationed in the past, received extensive flooding from the "Back Bay" - a result of a low pressure-induced "storm surge" coupled with a Full Moon-strengthened high tide.

Not that smaller communities haven't been affected. They have. A man near Lancaster died in his running car, half-buried in snow, where he was either taking a break from shoveling or trying to warm the car up to get it free. It was buried by a passing plow, trapping him inside. He apparently died of carbon monoxide poisoning, which I suppose is marginally better than suffocating or freezing to death.

Is this it for Winter? Here in Northeastern Pennsylvania we have had some of our worst snowstorms later in the season, including and particularly the Valentine's Day storm of 2007. There are some rumblings of another storm lining up for later in the week.

I suppose we will just have to wait and see, and keep a good supply of milk, bread, and eggs on hand. Just in case.

Email ThisBlogThis!Share to TwitterShare to FacebookShare to Pinterest
Labels: Weather

It's easy to forget about the weather, to think of it only in the context of the moment. Today, January 10, 2016, was gray, clammy, and rainy, not too cold, not too warm - until a brief, windy rainstorm blew through around 5:00 in the afternoon. But last week, briefly, it was cold.

The Winter of 2015-2016 has so far been a sharp contrast to the last two Winters, and even that memory is misleading; neither of those Winters was particularly cold until later in the season, though once the temperatures dropped, they stayed in the bone-shatteringly cold range. The deep freezes of late 2013 and early 2014 were the first in several years, meaning that water that had seeped into cracks in roadways over the previous few years froze all at once, causing three or four years of potholes to emerge in a matter of days. In early 2015, the snows that fell fairly regularly were not particularly heavy, but the snow never melted between snowfalls. While it was easy to shovel the sidewalks after any one snowfall, the snow on the sides of the sidewalks just piled higher and higher.

December 2015 was the warmest on record in Northeastern Pennsylvania. So much so that when I pulled up at my brother's house after work on Christmas Eve for our Vigil Supper, no coat was required.

Christmas Eve 2015 featured a Full Moon. When I arrived at my brother's house I pulled out my camera and grabbed a few shots of the cloud-shrouded Moon rising through the trees. 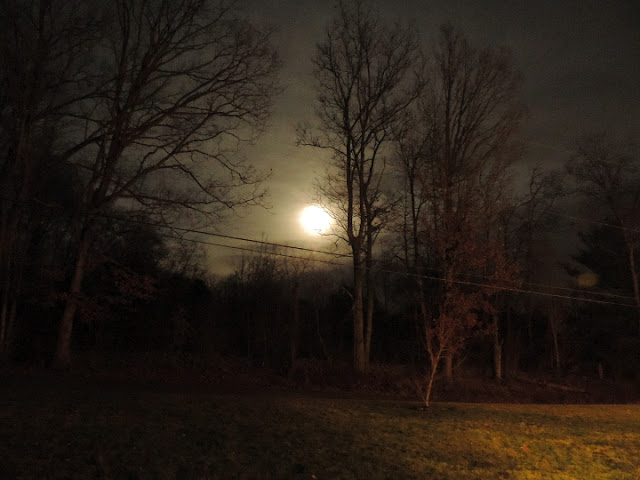 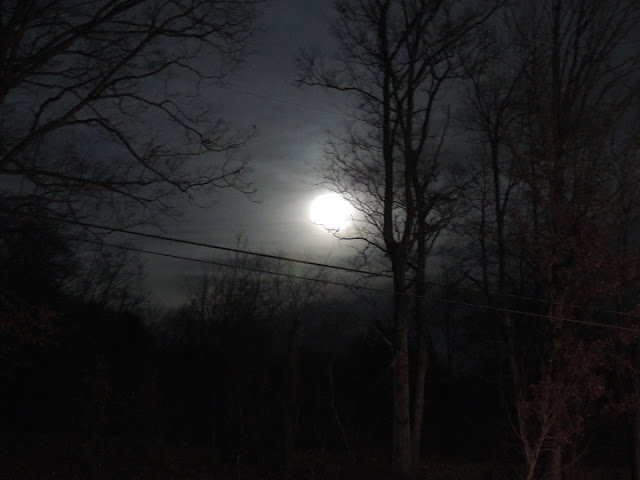 What used to be "Midnight Mass" was held at my church at 10:00 PM on Christmas Eve. Parishioners used to wearing winter coats in church filled the pews in shirtsleeves. Stepping out after Mass brought some relief - temperatures by then had plummeted into the low 50's and I took the opportunity to try to grab some shots of the Full Moon over the church. This turned out to be a bit of a challenge: the Moon was still wrapped in thin clouds, while the church was surrounded by bright lights. Properly exposing the Moon might mean underexposing the church, while any attempts to get much of the church resulted in all sorts of glare. In the end I settled for two compromise shots. 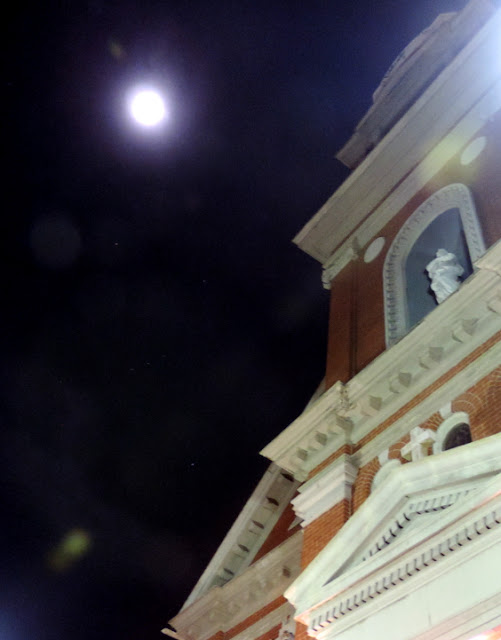 Here the overexposed Moon can be seen directly over Orion. I didn't notice Orion when I first took the image, and would not have tought it visible through the clouds.The green orb in the lower left is an internal reflection. 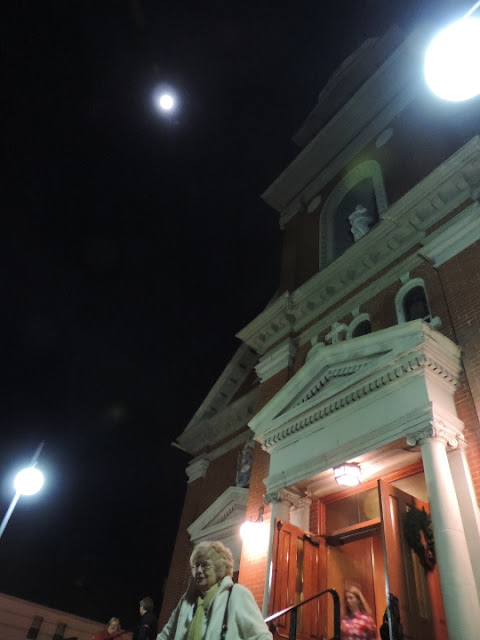 This is a more zoomed-out image, which unexpectedly caught my Mom coming out of the church. (She had assumed I was on my way to the back parking lot to get the car and pick her up in front of the church.) Behind her the lone altar server emerges. She promptly ran up to her parents to let them know how hot she had been!

The warm Christmas Eve was a strange experience, and not entirely unpleasant, though it left everyone with a sense of a world seriously out of whack. The Full Moon was just a nice added touch. What will future Christmas Eves be like? Was this an anomaly, or a new normal?