Tannersville and the leaves: check

I ticked one thing off my current to-do list today. I took my mom for a ride to The Crossings outlets in Tannersville to do some shopping and some leaf-seeing.

I was supposed to work overtime tonight, which is to say I was on the list of people tentatively scheduled for overtime. However, our overtime needs turned out to be less than originally anticipated four days ago, so I was among the people cancelled.

I had been planning to take my mom to Tannersville sometime during these days off, partly so we could do some shopping - her for shoes, me for discounted books, and both of us for whatever else there was to see - and partly so we could see the Autumn leaves, which we figured should be at or near peak along Route 80. On the way home from work I heard the weather forecast for the next few days: cloudy today, but rainy and even possibly snowy the next two days. So it seemed like today was the day to go.

When I got home my mom told me that she needed to deliver some documents to someone in Scranton today. Scranton is about twenty-five miles northeast of Nanticoke.* I decided that after a nap and a shower I would drive her there, and then we would continue northeast to Route 380 and drive southeast to the point where 380 meets 80 - which I believe is the "crossing" to which the outlet mall's name refers.

We started out around 2:00 in the afternoon. The diffuse sunlight shining through the clouds illuminated the trees of the Wyoming Valley visible from Interstate 81 beautifully. While there are still many trees displaying green, the trees that are showing reds and yellows are vivid and bright. The same was true as we passed out of Luzerne County and entered the Lackawanna Valley region within its namesake county. Just south of Scranton, barely a mile before the left-hand Central Scranton Expressway exit, there is a fantastic panoramic view of nearby mountains rising up out of a gorge; the trees here are the ones that so impressed me on the first day of this rotation. Today, four days after that post, they are even more stunning.

The visit to Scranton was uneventful. I dropped my mom off at the office building where she needed to deliver the documents and waited for her in the car, doing some people-watching while I waited. (Hey, youse dames in da skirsts wit' da high heels and great gams: dem stockings wit' seams running up da back o' da calf would not be entirely inappropriate.) When she was done we hopped back on I-81 and continued northeast to Route 380. Veering south-by-southeast, we then headed through the heart of the Poconos, past places like Moscow and Gouldsboro and (snicker) Scotrun.**

380 climbs almost imperceptibly through these regions, but the effect of the change in elevation was evident in the trees: many of them were well past peak, and some were denuded of leaves entirely. The sight was a little disappointing, even as we descended again towards the intersection with Route 940 (site of a great sushi restaurant and many fond memories of good times with good friends) and beyond.

Soon 380 merged with 80 and we only had a few minutes to observe the leaves here before it was time to take the exit for Tannersville. The mall itself was a disappointment; my mom was not able to find shoes in her size, and the only books that I found that were worth buying were some discounted graphic novels at 50% - 66% off. We reconnected and hit a food court for some cinnamon sticks, and then determined that there was really nothing else of interest there for us. So after less than an hour, we were on our way back home.

We took the exit for I-80 west, which is a terrible interchange and not for the faint of heart. I had to do some fancy driving to avoid being crushed by the fast-moving tractor-trailers behind us or slamming into the slow-moving ones ahead of us. We passed the intersection with 380 (which was the way we had arrived from Scranton) and continued west on 80 to the Blakeslee exit to get onto Route 115 north towards Wilkes-Barre.

This was old familiar territory. I once had many friends who lived in Blakeslee and the surrounding areas. For most of the 1990's I spent many weekends drinking and carousing with these friends. But you know what they say about all good things. One by one my friends got married, started families, and moved away - or just moved away. Now there is no one left, not in that immediate area at least.

The landscape there has changed with the post-9/11 influx of residents from New York City to that area. Route 940 has perhaps changed most of all, but I didn't travel along that former two-lane road this time. Instead we tooled along route 115 as the sun was gradually sinking lower into the west. The trees there were beautiful, as they always have been, even though perhaps there were fewer of them than there once were.

Route 115 makes a steady, somewhat steep climb from Blakeslee to a point a few miles south of Wilkes-Barre, where it then begins a steep descent - and a dangerous one for trucks, as evinced by the mandatory stop point for trucks over 21,000 lbs. (so that, in theory, they would be starting out at a speed of zero) and the two runaway truck ramps, steep off-road paths with periodic hills of gravel designed to slow down and stop a truck that has lost its brakes.

Along this descent it is possible to get breathtaking views of the Wyoming Valley. Often these views were my favorite parts of visits to my friends in the area of Blakeslee; after a long weekend of partying I would leave early Monday morning and make my way back to Nanticoke just as the sun was rising and illuminating the clouds along the Susquehanna River and the mountains that form the north wall of the valley, all from a vantage point along the mountains that form the south wall.

And this evening the Wyoming Valley was stunningly gorgeous, a carpet of reds and yellows and oranges spread out as far as the eye could see. Soon we descended into that valley and made our way to a Perkins restaurant in Wilkes-Barre for dinner.

"You know," my mom said, "I think, after going all that way, the trees are prettiest right here at home."

I had to agree. Still, I'm glad we made the trip. 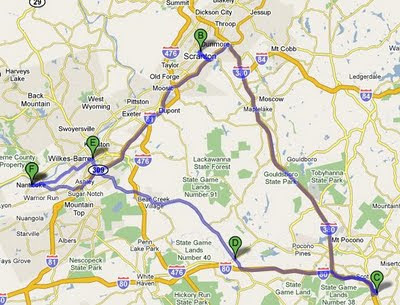 Our travels today. Nanticoke is points A (not seen) and F. Scranton is point B. Tannersville is C, Blakeslee is D, and Wilkes-Barre is E. Total travelling distance somewhat more than 111 miles. Image from Google Maps.

*I am still trying to disabuse some friends of the notion that I live "in Scranton." Considering that these people are from satellite areas of New York and Philadelphia, where even people living fifty or a hundred miles outside of the city limits aspirationally consider themselves "just outside of" their adopted metropolises, this may be a tough task.
**That's "Scotrun." Not "Scrotum."
Posted by D.B. Echo at 11:30 PM