You probably already know about Google Earth. (If not, you need to stop whatever you're doing, download it, and then see what your house looks like from the air.) You may even know about Google Mars, which I wrote about extensively here. But what I didn't know was that since July 20, 2009 - the 40th anniversary of the first human walking on the Moon - Google Earth 5 has also had a Google Moon feature.

I don't remember if I was specifically speculating that this feature might exist, or if I was looking for something else when I clicked on the Google Earth toolbar button with the cartoon icon of a ringed planet on it. But there, under "Earth," "Sky," and "Mars," was "Moon." I clicked on it, and this is what I saw: 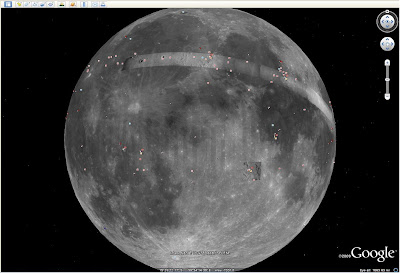 One of the things that most people find surprising on seeing the whole of the Moon for the first time is this: it's not homogeneous. At all. It doesn't look the same from every angle. 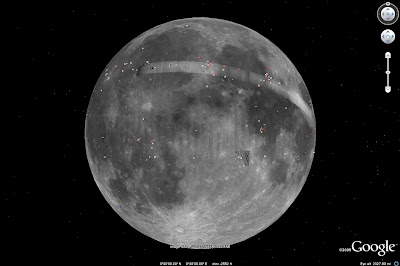 We are so used to seeing the 59% of the Moon that is presented to us (that extra 9% comes from the phenomenon known as libration) that we tend to assume that the Moon must look the same all over, a roughly even mix of bright cratered regions and dark regions called maria, as we see in the image above, centered on the lunar latitude and longitude coordinates 0, 0. But that ain't so. Giving the Moon a half-spin to the coordinates 0, 180 - the "Far Side" of the Moon, also erroneously thought of as the "dark side of the Moon" - we notice a remarkable difference: 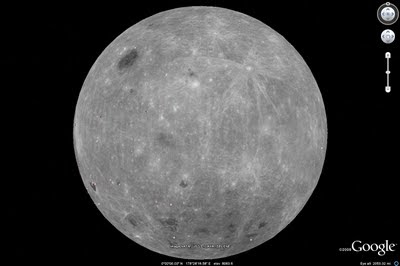 Aside from the Mare Moscoviense in the upper left, the only dark spots are some flooded craters near the bottom! Otherwise the most striking feature is Jackson Crater and its associated ray pattern covering much of the upper right, looking almost-but-not-quite like a mirror image of the familiar crater Tycho and its ray pattern near the bottom of the Near Side view. 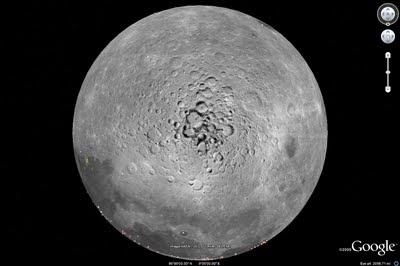 The north pole of the Moon looks even more different, but part of this is a photographic illusion. All of these Moon images are actually mosaics of thousands of images taken under optimal lighting conditions. But at the poles, lighting conditions are never really optimal: the Sun is always low in the sky, casting deep, long shadows. The north and south polar views actually present an impossible version of the Moon, since half of this image (more or less, depending on orbital geometry) would be in darkness at any given time. 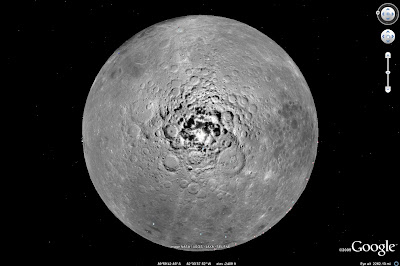 The south polar region of the Moon. Some of those dark, shadowed craters never see sunlight. The speculation is that any comets that have collided with this region of the Moon will have deposited some their water - in the form of ice - in these permanently shadowed craters, and it will still be there. Such ice deposits could provide a usable source of water for future manned missions. Crater Cabeus, located in the dark region at about ten o'clock in the image above (shaped something like a closed fist with a hooked thumb), is a target for a mission that will crash a rocket into the surface in an attempt to detect any resulting tell-tale signs of water. 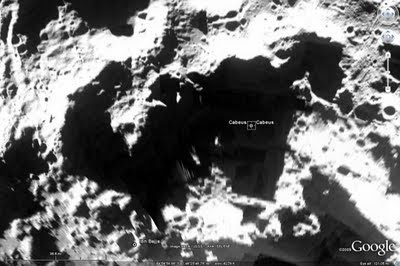 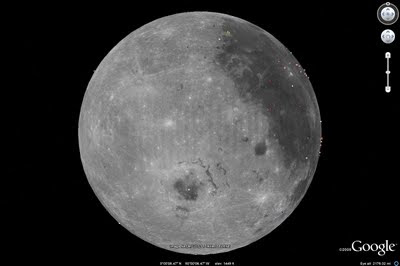 In this image, the part of the Moon that faces us is to the right. The image is dominated by the Mare Orientale in the lower center, an enormous crater with a flooded basin. Though the name means "Eastern Sea". it is located in what is now called the "western" side of the Moon. Things can get very confusing when you're dealing with places initially explored through telescopes that flip and invert images. 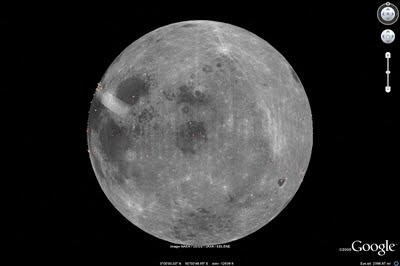 Finally, on the right (eastern) side of the Moon we again see relatively few features: the rayed crater Giordano Bruno near the top, and the occasionally-glimpsed Mares Marginis, Smythii, and Australe. On the lower right we see the flooded Tsiolkovskiy Crater, and above it a grouping of overlapping rayed craters. 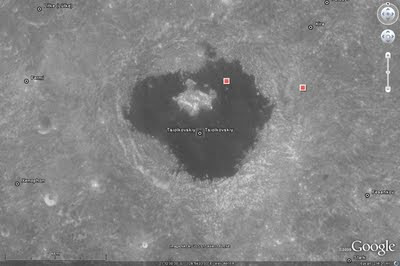 That's just an overview, a sampling of what can be seen from a distance. Go and open the Moon view on Google Earth and explore our nearest neighbor in space yourself!
Posted by D.B. Echo at 10:20 PM

Email ThisBlogThis!Share to TwitterShare to FacebookShare to Pinterest
Labels: Astronomy, Online, The Moon

I'm catching up - this is really cool!