Other Churches, Other Windows: St. Stanislaus 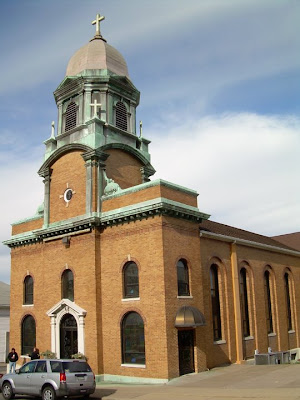 For the past two Sundays I have attended Mass at St. Stanislaus Church in Nanticoke instead of my home parish of St. Mary's. This has been partly for the sake of expediency: St. Stan's offered the earliest Masses each Sunday at 8:00 in the morning, meaning a down-time of only an hour or so between my arrival in Nanticoke after work and the start of Mass. As I would be sore and tired from having just put in a twelve-hour shift of running around trying to convince multiple DVD manufacturing systems to continue working through the night, I would be looking for a parking place near the front entrance of the church. My early arrival would help ensure that that happened. 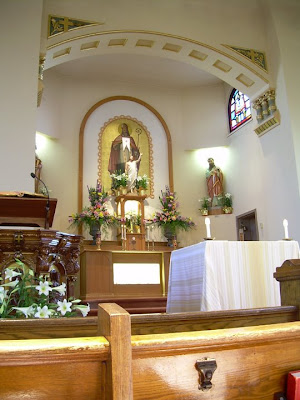 I have some history with this church. As a child, my grade school education was split between St. Mary's and St. Stan's, with kindergarten and the odd-numbered grades in St. Mary's and the even-numbered grades in St. Stan's. This arrangement was terminated sometime before my sixth grade as all classes were consolidated into St. Mary's. But during second and fourth grade St. Stan's was the church I attended for school-day Masses.

I remember it as a dark and imposing church, sulfurous-smelling and not very pleasant. About fifteen years ago there was a major renovation done to the church which included the replacement of all of the stained-glass windows with ones of a more modern design from local stained-glass window maker Baut Studios. (A friend who was working at the church at the time of the renovation does not know what became of the old windows.)

Unfortunately, St. Stan's is one of the Roman Catholic Churches in Nanticoke scheduled for closure after consolidation, and all this work will have been for nothing.

It was not the windows that caught my attention as I sat in the pew last week, exhausted and sore, waiting for Palm Sunday services to begin. Frankly, I don't like the modern windows very much, though I will allow you to judge for yourself. The thing that caught my eye was much more mundane, but had tied up with it a cultural and historical element of Nanticoke. 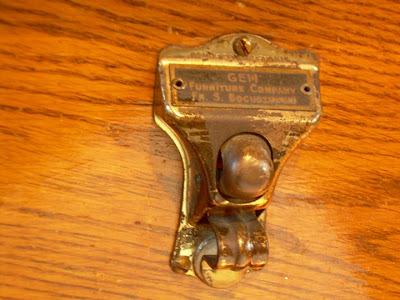 It was, as faithful readers ...tom... and Hedera noted in the comments for an earlier post, a hat hook - a spring-loaded clip mounted to the back of the pew in front of you that allowed gentlemen to hang their hats by their brims back in the days before John F. Kennedy's example set made going hatless stylish and standard. These hooks are ornate and appear to be lacquered brass; the ones at St. Mary's resemble eyeless, earless, tuskless elephant heads and are made of metal with a dark, glossy finish. In the decades since hats went out of fashion, these hooks have been used to hold missalettes (back when these books were issued monthly and were relatively thin), bulletins, announcements, or special collection envelopes.

The interesting thing about these hooks was the sponsor tag, a little plaque about one inch across affixed to each hook with what appear to be grommets. 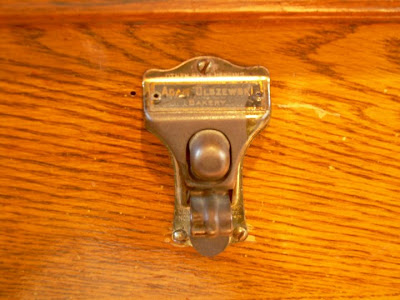 These were most likely mass-produced items, relatively inexpensive to manufacture. The creation and addition of the sponsor plaque probably doubled (at least) the cost of each hook.

These hooks have outlived their sponsors. Gem Furniture, the sponsor of the first hook shown, was one of at least three furniture stores in Nanticoke, the others being Bartuska's and Noble Furniture. Gem Furniture closed about fifteen years ago. The Adam Olszewski Bakery was located across the street from what is now Nanticoke's Municipal Building, which would place it less than half a block from Sanitary Bakery. The Gem Furniture building now houses a Credit Union, a WIC office, and the offices of Representative John Yudichak. The Olszewski Bakery now houses a beauty salon.

Upon inspecting the second photo I could almost make out a line of text directly below the top mounting screw. But what did it say?

Some manipulation and enhancement later, and I was able to tease out two of the words - and surmise the rest:

The first word appears to be "OTHER", and the last, "PENDING." Now, what sort of things usually come in a group, and are often pending? I could only think of one obvious candidate: patents. So the middle word, I believe, it the abbreviation for "patents": "PAT'S" - with an exaggerated space between the "T" and the "S" to make room for the mounting screw.

Other items of historical interest populate this church. This rostrum, or lectern, or whatever it is, features ornately carved wooden images on all sides. 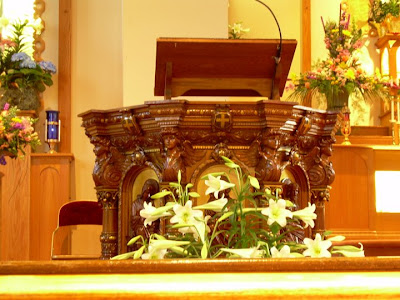 It was once nearly twice as tall and featured a set of steps the lector would ascend, where they would tower over the congregation while reading the Word of God. The recent renovation cut the lectern down to ground level, eliminating the possibility of seeing someone solemnly tumble down the steps - as I am sure has happened more than once in the church's history. As with the old windows, I have no idea what became of the base of the rostrum. 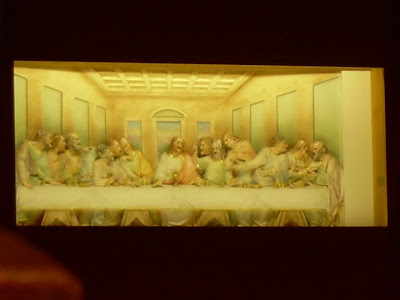 One other item of note is this image of the Last Supper, which I believe is a bas-relief - it certainly appears to be three-dimensional. It is located under the back altar and would be obscured from view by the front altar from all but the front few pews. (It is visible in the second photo in this post as a white rectangular patch in the lower center portion of the image, below the painting of St. Stanislaus and the small, flag-bearing statue of Jesus.)

As I have noted above, the new windows are of a modern style, featuring a much clearer glass where each pane is a single, uniform color. The windows also have an abundance of clear panes, providing plenty of light into the church. 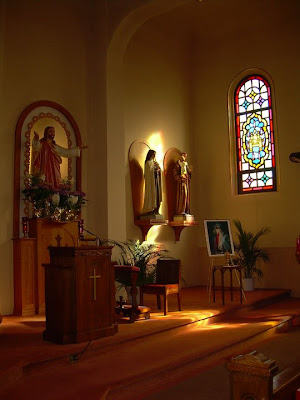 The windows face East and West, meaning that except for the hours after sunrise and before sunset the sun is generally not going to be shining directly through them. The alignment of the windows is such that at 8:00 in the morning this past Easter Sunday, a sunbeam was aimed directly at the main altar - specifically, directly at the head and face and eyes of Father Nash, who was conducting the service. Above we see sunlight falling on the statue of St. Thérèse of Lisieux, who stands between statues of Jesus and St. Anthony of Padua. 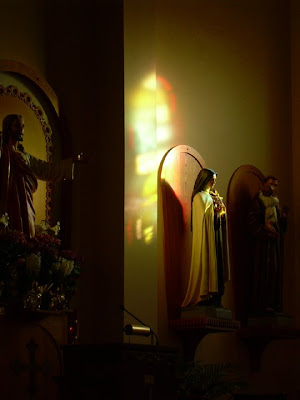 In this photo, exposure time has been adjusted to capture the sharp and distinct colors being transmitted by the windows. Modern stained-glass windows have some virtues, I suppose. 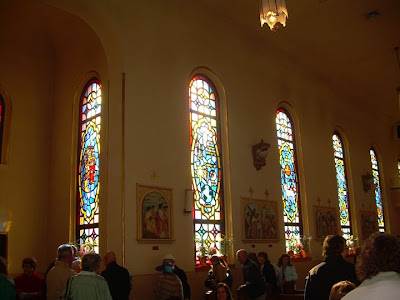 A view of the Eastern windows as Easter services let out. Despite its relatively small size, St. Stanislaus looks quite imposingly large in this view. Note the ornate hanging light at the top right center.

A close-up view of the center window in the previous image. The window contains the opening lines of the Apostles' Creed: "I believe in God, the Father Almighty, Creator of Heaven and Earth". 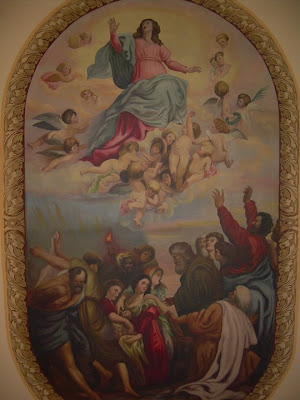 This image dominates the central portion of the church ceiling. It is fairly enormous - how large, I cannot say, but I will guess at least twenty feet from the top of the image to the bottom. To get this photo, I stood directly under the center of the painting and opened my lens up as wide as possible. I suppose I might have been able to get the whole image if I had, say, laid down on the floor.

That's not the whole story of St. Stan's, to be sure. But I am not as familiar with the history and traditions of this church as I am with St. Mary's. There are doubtless parishioners at St. Stan's who could do a much better job of documenting this church before its doors are closed for good in a year or two. I can only hope that some of them choose to take on this task.
Posted by D.B. Echo at 1:11 AM

Email ThisBlogThis!Share to TwitterShare to FacebookShare to Pinterest
Labels: A Song of Nanticoke, Art and artists, Church, The Stained Glass Project

The creation and addition of the sponsor plaque probably doubled (at least) the cost of each hook.I am sure there was a 'fee' or 'sponsorship' or 'indulgence' or whatever that more than paid for them. Old-fashioned fundraising I am sure.

I too remember my boyhood Catholic church as a dark, imposing structure that seemed more 'doom and gloom' than 'joy and salvation'. Maybe that was not such a bad thing.