The Bishop is not the Church

Bishop Martino of the Diocese of Scranton arrived in the middle of a panel discussion on faith issues and the Presidential election in Honesdale on Tuesday - and effectively shut it down.

Local and national Catholics reacted Tuesday to statements by Bishop Joseph F. Martino apparently discounting teachings of the national body of bishops during a political forum at a Honesdale Roman Catholic Church this weekend.

...Martino arrived unannounced in the midst of a panel discussion on faith issues and the presidential campaign at St. John’s Catholic Church on Sunday. According to people who attended the event, the bishop chastised the group for holding the forum and particularly took issue with the discussion and distribution of excerpts from the U.S. Conference of Catholic Bishops’ position on voting issues. The document defines abortion and euthanasia, as well as racism, torture and genocide, as among the most important issues for Catholic voters to consider. “No USCCB document is relevant in this diocese,” he was quoted as saying in the Wayne County Independent, a Honesdale-based newspaper. “The USCCB doesn’t speak for me.”

... “The only relevant document … is my letter,” he said at the forum, according to the Independent. “There is one teacher in this diocese, and these points are not debatable.”

To read the full article in the Wilkes-Barre Citizens' Voice, go here.


Essentially, Bishop Martino has let local Catholics know that discussion of issues is not necessary and will not be tolerated, since he has reduced Catholicism in the Scranton Diocese to two simple words: Obey ME.

This current bishop is just another caretaker entrusted with the pastoral guidance of the the Catholics of the Diocese. But he is not the Church. He is a Bishop, but he is also a man, fallible and imperfect. He is doing nothing - he has done nothing - to slow the exodus of Catholics from the Church. Indeed, his arrogance and belligerence are major factors in many Catholics choosing to leave the Church - or at the very least, to withhold financial support from the Diocese.

Many of the Catholics who remain active in the Diocese of Scranton do so in spite of Bishop Martino, not because of him. They know that their faith, their religion, their Church, is much bigger than a single man. The Bishop is not the Church. And after he is gone, these things will remain - and if their faith and their will is strong enough to make it through this test, so will a few members of the Diocese.

At this point Bishop Martino's efforts are bordering on voter intimidation. Whether or not they actually cross that border will depend on the interpretation of the law by legal professionals. But things may become clearer after the detailed results of the November 4th election become available.

The Diocese of Scranton consists of these eleven counties, according to a map from the Diocesan website: 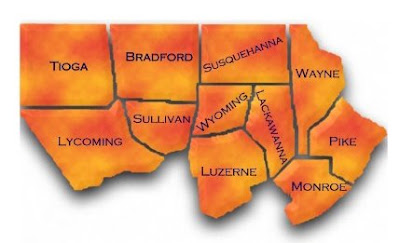 According to Robert Vanderbei's "Purple Map" of voting proportions from the 2004 election, these counties range from solidly Republican red (Tioga, Lycoming) to strongly Democratic blue (Lackawanna), with various shades of purple in between. (Luzerne County, where I live, is a bluish purple.) 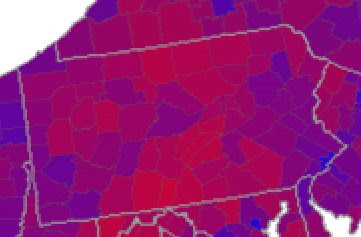 John McCain has no chance whatsoever to win the Presidential election if he does not win Pennsylvania. It is a necessary but insufficient condition for victory. He almost certainly cannot win in Philadelphia, but Philadelphia is only a part of the Pennsylvania puzzle. There are several ways to win Pennsylvania without winning Philadelphia. One of those ways would be to turn all of those purplish areas in the East and West to red like the middle parts of the state. And there are two ways of doing that: convince people who are not planning to vote for McCain to vote for McCain, or convince people who are planning to vote for Obama to stay home.

Bishop Martino's edicts have the effect - and possibly the intent - of doing both. By convincing Catholic voters who might otherwise not have voted at all that they have a moral obligation to vote for Republican candidates, Martino adds some red to the mix. By convincing Obama supporters that their souls will be in mortal danger, and possibly in a state of mortal sin, if they cast a vote for Obama, he may be able to get some Obama voters to stay home, and remove some blue from the map.

But is this voter intimidation? Again, I think that will be determined by Bishop Martino's reactions once the district-by-district results come in. What reprisals will Catholics in districts that go for Obama face? Perhaps nothing. But who knows? Fear has long been a major motivating tool in the Catholic Church. And no decisions have officially been made on parish closings yet. Well, it looks like there aren't any Catholics here in this district. So I guess no one will mind if I close the local church...