For the third night in a row I was able to get out and photograph the ongoing and ever-changing conjunction between Venus, Mars, and Saturn. Thursday night's sky was beautifully clear and cloudless, with excellent "seeing": the planets popped out of the background easily and made themselves excellent photographic targets. Friday night was far more humid, and this coupled with wispy clouds throughout the sky made viewing conditions comparatively lousy, with the planets dim and inconspicuous against a milky field. Tonight was somewhere in-between: the humidity was lower, but the clouds were more well-defined. (It's race weekend at Long Pond, so rain is almost as much a certainty as it is for the Bloomsburg Fair.)

I chose a different viewing location tonight. On the previous two nights my photos were taken from the corner sidewalk in front of my mom's house, which is on the busiest street in Nanticoke. I have to admit that I get a little antsy as I stand there with my tiny Nikon Coolpix L4 mounted on a photographic tripod that I bought at Kmart more than ten years ago, with the occasional car whizzing past going at least twenty or thirty miles per hour faster than the posted speed limit. Tonight I decided to pull up stakes and move my setup to my house across town, where my photos would be taken from the relative privacy of my back yard. Also, I had to mow the lawn and do some other yard and garden work, so this was an opportunity to neatly and efficiently sequence tasks.

Clouds were clearly going to be an issue. I waited patiently as one or two of the celestial trio popped out of the thick wisps that moved with agonizing slowness along the Western sky. My first clear shot was at 9:14 PM: 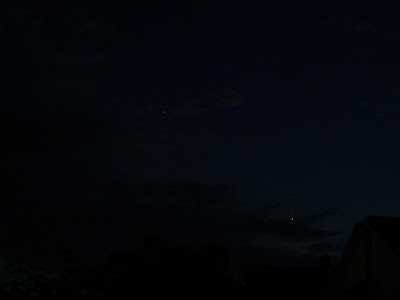 In close-up, we can see that Mars is completely surrounded by clouds, and Venus appears to be shining through a cloud. 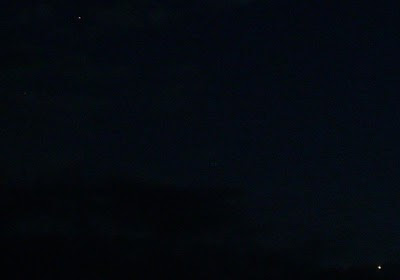 An interloper star can be seen here, midway between the Mars-Saturn pair and Venus. A quick check with Google Sky indicated that this is Beta Virginis. 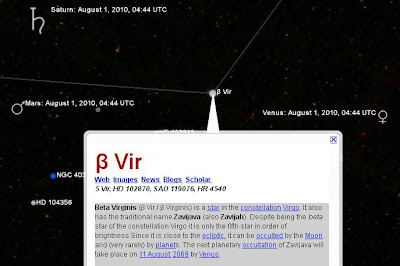 Beta Virginis is a star with an interesting historical role. From Wikipedia: "This was the star Einstein used during the solar eclipse of September 21, 1922 to determine the speed of light in space, as it fell close to the Sun."

The planetary trio continued to play their game of peek-a-boo in the clouds as they got ever lower in the sky. Photographing them was complicated by using a ten second delay on the shutter (the self-portrait mode) to avoid any camera vibrations, and by the fact that each of these images was actually a several second exposure. So from the time that I pressed the button, to the time the shutter opened, to the time the shutter closed, took something like thirteen to fifteen seconds - plenty of time for a cloud to slide across one or more of the planets. This photo was captured at 9:17 PM. 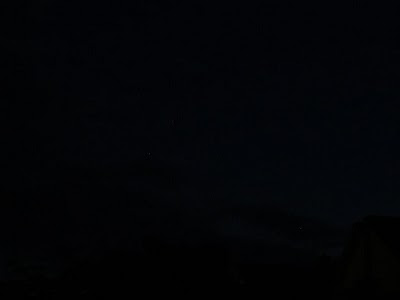 Finally a thick bank of clouds rose up over the Western horizon and began to creep over Venus. I took my final shot of the trio at 9:20 PM and called it a night. 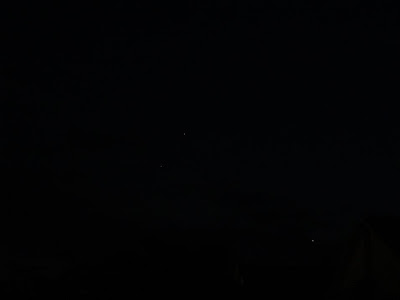 You can compare the positions of these planets to their positions on previous nights here:

If you haven't seen it yet, or need a quick refresher, watch the Jack Horkheimer video explaining this event here.

And special thanks to Noreen Clark of WNEP for announcing this event on her weather forecast last Monday morning. Without that announcement I might have missed this entire event!

We'll see how much longer my luck holds out. I hope I get a photo of the tightest grouping of these three planets next Sunday, August 8!
Posted by D.B. Echo at 11:35 PM