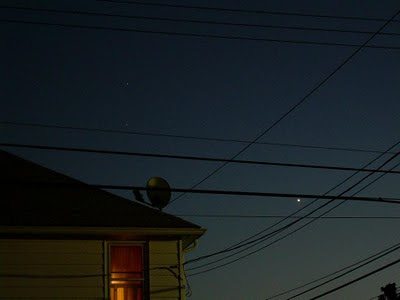 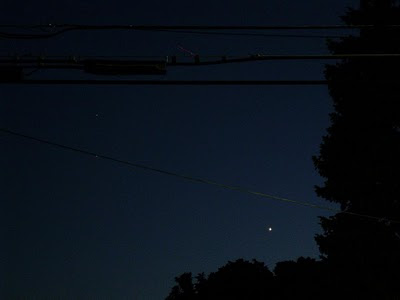 As you may recall from a previous post, we're currently witnessing a beautiful planetary ballet low in the West after sunset. Mercury, Venus, Mars, and Saturn are strung out along a relatively small area of sky. (In fact their distances from each other are enormous; the closeness is an illusion caused by our line of sight.) If you have clear skies and a good view of the horizon you might be able to see Mercury. The rest of us will have to be content with bright Venus at the lower right, and dimmer Mars (below) and Saturn (above) on the left.

I'm glad I was able to get photos tonight and will try to get photos over the next week or so. Because of the changing positions of the Earth, Venus, and Mars (and to a much lesser extent, Saturn) along their orbits, the placement of these planets will shift considerably over the next ten days, until on August 8 Venus, Mars, and Saturn will all be clustered together into a relatively tight ball. See the Jack Horkheimer videos here to get a good idea of what you will see and when you will see it.

But don't dawdle - because these planets are so low, the window to see them is very tight. At 8:50 tonight the sky was still too bright from the glow of twilight to be able to see Mars and Saturn, and horizon obstructions (houses and trees) kept me from seeing Mercury. The upper picture above was taken at 9:11 PM, and the lower picture was taken at 9:14 PM. Shortly after that Venus was obscured by the trees.
Posted by D.B. Echo at 11:23 PM