I still get and read print editions of our local newspapers. Both of them. I make no apologies for this; in fact, it is a point of pride with me, as is the fact that we actually have two local newspapers. And by "local" I mean local, as in based out of the nearest larger city (Wilkes-Barre) and covering much of the surrounding area, not simply a version of USA Today or some other feed-based phony "local" with one or two token articles tossed in to make it look like they're actually covering local news.

I looked at the cover of The Citizens' Voice and saw a story of immediate interest to me - Marcellus Shale drilling will soon be coming to the vicinity of the reservoirs that supply water to tens of thousands of people in Northeastern Pennsylvania, including the City of Nanticoke. 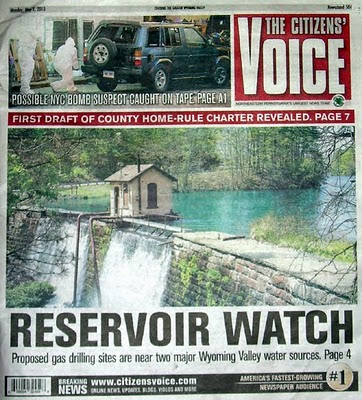 This is a big story. An important story. News that people need to know. The story has useful information like this tucked away in it:

To inspect the sites, DEP is increasing its oversight staff from 88 people to 193, and is opening new offices in Williamsport and Scranton, Hanger said. The department wanted to move staff closer to parts of the state where natural gas drilling is new and occurring for the first time, he said.

Drilling permits for the Lake Township site are expected to be discussed at the Luzerne County Zoning Hearing Board meeting Tuesday at 7 p.m. in the commissioners' room in the county courthouse.

The state Department of Environmental Protection has an oil and gas resource page at http://www.depweb.state.pa.us/, including contact information and reports on permits issued and wells drilled.

So, hooray for The Citizens' Voice, and hooray for Elizabeth Skrapits, who wrote the article. I thumbed through the rest of the paper, noted an article on solar power that I would get back to later, stopped briefly at the editorial page to read a letter-to-the-editor that made me realize how important the upcoming elections are, and hit the funny pages. Then I turned to the other newspaper, The Times Leader, to see what stories they were leading with. Hmmm, a few national feeds on the oil spill in the Gulf of Mexico, the Times Square semibombing incident, a new Federal study into the incidents of cancers as they relate to proximity to nuclear power plants, and..oh, here in the center, there's a local story... 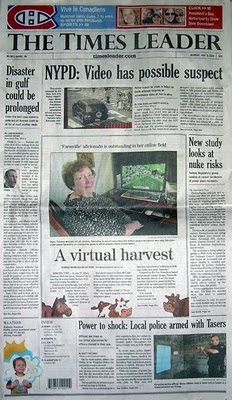 A virtual harvest: ‘Farmville’ aficionado is outstanding in her online field - The Times Leader, Wilkes-Barre, PA

I did a double-take. I had to check to make sure I wasn't reading a print edition of The Onion, with an article like "Local Woman Enjoys Playing Farmville."*

I couldn't believe it. I had to read the article. Partly for information - I'm on Facebook but I have avoided learning anything about Farmville, so my primary exposure to it is from the South Park episode "You Have 0 Friends." But also to see...OK, harmless, harmless, harmless. A nice little slice of life story about some lady who has found a way to pass the time. Yay for her.

I skipped forward temporally. I would soon be flipping the paper over, opening up the sections to get to the important part, the funnies. Usually the back page of the third section. In color, the whole page. Just like that ad last week, the ad that I momentarily mistook for the funnies, placed on the back page of the first or second section.** A full-page, full-color ad. Expensive. 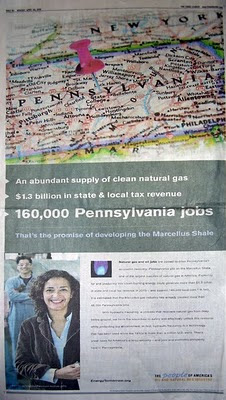 Ad that appeared on the back page of section C of the Wilkes-Barre Times Leader, Monday, April 26, 2010. 160,000 Pennsylvania jobs! $1.3 billion in state and local tax revenue! But only if you don't stand in our way! 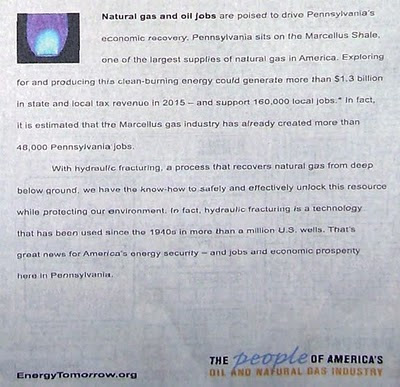 You know who energytomorrow.org is. They're the folks who are buying lots of TV ad time - locally, maybe nationally, I don't know - to tell us how wonderful it is to see more domestic oil and natural gas drilling. Telling us to disregard those unpatriotic doom-and-gloom naysayers who warn about potential hazards. Telling us that natural gas is a clean energy source, never mind the processes involved in getting it out of the ground, or the consequences of those processes.

Energytomorrow.org, the propaganda arm of the American Petroleum Institute.

Who recently did a major ad buy in the Times Leader.

Which ran a front-page story on a local woman who enjoys playing Farmville.

While their competitor, the Citizens' Voice, ran a front-page story on potential risks to local reservoirs from the expansion of Marcellus Shale drilling.

"Senate Appropriations Chairman Jake Corman, R-Bellefonte, predicted the revenue shortfall will reach $1.3 billion by the end of the fiscal year on June 30."

But...wherever will we find a sudden influx of cash in such a specific amount?

*I just checked. The Onion doesn't have any articles like that. Apparently that's too banal for them to even see the humor in it.

**Turns out it was actually section C.

This brilliantly constructed post demonstrates how certain points are best made through blogging.

Oh, hell yes, they're advertising nationally. Here's their website's page of TV ads. They're the ones with the slender blonde in the black pantsuit, telling us all that there are 9.2 million jobs in the oil and gas industry. The implication being, I guess, that we'd better keep drilling and if we stop there's another 9.2 million of our friends and neighbors out on the street.

Reading your post reinforces to me the reality that the most important and well thought out news is not contained in a newspaper. At least, our local ones.

Linkmeister, I think they say that they "support" all those jobs. So: I work in DVD manufacturing. I support probably well over ten million people with what I do - from the postal carriers who deliver DVDs by mail, to the petrochemical workers who create the polycarbonate used in the manufacturing process, to the craft services people who keep people fed and watered on the sets of movies...

"The most effectual engines for pacifying a nation are the public papers... A despotic government always keeps a kind of standing army of newswriters who, without any regard to truth or to what should be like truth, invent and put into the papers whatever might serve the ministers. Nothing can now be believed which is seen in a newspaper. Truth itself becomes suspicious by being put into that polluted vehicle. The real extent of this state of misinformation is known only to those who are in situations to confront facts within their knowledge with the lies of the day." Thomas Jefferson