Clean up the Susquehanna Sewer!

I'm going to be lazy (for the most part) and redirect you to steal content from the latest missive from Mark Cour on Circumlocution for Dummies. In addition to being one of the greatest advocates for developing a sense of community in the city of Wilkes-Barre, Mark has also become a major advocate for cleaning up the Susquehanna River. This has come in part from his association with Kayak Dude of the Susquehanna River Sentinel, but also comes from his own love for this area and its environment.

The city of Wilkes-Barre has just made a major investment in opening a kickass beautiful River Commons that allows users to get up close and personal with a river that serves as an open, untreated sewer for folks upriver (particularly and especially Pittston.) From Mark's post:

When it rains like all hell, the combined sewage outflows are predictably going to discharge untold tens of thousands of gallons of untreated raw sewage directly into the river, and at a dizzying rate. Thereby, this is a public health issue that needs to be addressed by both our county officials, as well as our city officials. The public needs to be educated whereas high water events are concerned.

As a general rule, try this one: If the river has swollen beyond the lowest of the River Common’s concrete barriers, it’s most likely tainted by tens of thousands of gallons, perhaps more, of untreated human excrement. When the river swells to that point, you might want to restrict the children to playing in the pulsating fountain just up the hill a ways.

Treating raw sewage overflow is not a sexy issue for politicians to get involved with. It's not the sort of thing that affords the sort of ceremonies and television coverage that accompanied last week's grand opening of the River Common. But it is a necessary and vital thing to do to ensure not just the health of the Susquehanna River, but the health of the people (read: children) who make use of this new, beautiful, celebrated River Commons, and the river that flows past it.

A letter posted on Mark's blog states this problem starkly:

Many of the recipients of this e-mail have friends in local/regional government. I'm asking that you forward this e-mail, including pictures, to them ASAP. This is a potentially hazardous situation.As we all know, the Susquehanna River has been rising, and it has begun to flood the lower level of the fishing platform. I stopped by on Sunday evening, only to find ~10 young children playing in the river water that was collecting at the lowest level of the fishing platform. This should absolutely not be happening. There is raw sewage pouring into the river due to recent rains. To my utter disgust, I witnessed thousands of gallons of stormwater mixed with raw sewage pouring out of the CSO in Pittston ( by Cooper's ) on Saturday.

You can get a second confirmation here: http://mcour.blogspot.com/

(Another Monkey note: See this post - the third picture down is of the sewage outflow.)

Many of these kids were soaking wet from head to toe. 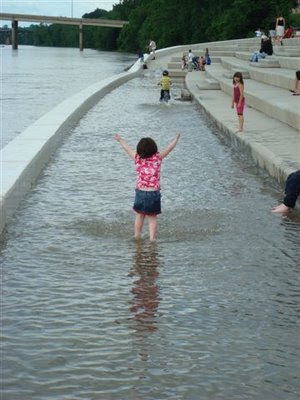 I could really embarrass some folks by naming who was there on Sunday @ ~5:15 p.m., saw this happening..,.and did nothing. I won't this time. I spoke with every parent I could find and told them what was in the water. They all immediately got their kids out.

There should be signage, or at minimum, someone patrolling the park who understands kids should not be playing in river water when there is a clean fountain for that purpose only a hundred feet away.

So. Now that Wilkes-Barre has a beautiful, new River Common, isn't it about time we get to work cleaning up the open sewer that is the Susquehanna River?
Posted by D.B. Echo at 1:38 AM

Email ThisBlogThis!Share to TwitterShare to FacebookShare to Pinterest
Labels: A call to action, Blogs and blogging, Northeastern Pennsylvania, The Environment, The Susquehanna River