Extremists, a co-worker once told me, are the only legitimate voices in politics, because they are the only ones who care enough to get their messages across. That was back in 2004. How much more so in what was once the the Republican party?

I heard a description a week or so ago of the political evolution in Iran in the last thirty years. After the Revolution, the dominant party split into the Moderates and the Extremists. The Extremists became dominant, and quickly purged, exiled, imprisoned, and/or executed the Moderates. After a period of time, the Extremists split into the More Extreme and Less Extreme factions - with the More Extreme side doing to the Less Extreme side what they had together previously done to the Moderates. The process then repeated it self over and over, with the dominant party gradually becoming more and more extreme - until we have the situation in Iran we have today.

It's not exactly the same in the United States. But the vocal extremists on the right - the folks I (and others) have dubbed "Rupugnicants" - have decided that they have a new target for their extended two minutes hate: President Obama's planned address to the students of the United States.

If you're on Facebook, you really need to check out the comments on this poll. It's quite an eye-opener to see what kind of people you're sharing the planet with.

When the Dixie Chicks said at a concert that they were "ashamed" of President Bush, they were widely condemned by the "Right" for treasonously showing disrespect for the President. How much worse is THIS massive show of hatred, contempt, and disrespect?

And how can anyone declare this presentation "political"? How much more so than, say, the President's Physical Fitness Award? I was never in any danger of winning one in high school, but if I did I had no intention of acknowledging it, lest I be mistaken for a member of the Reagan Youth. When a teacher once - incorrectly - thought he heard me making a disparaging remark about Ronald Reagan, he threatened me with detention. Will the same sort of disciplinary standards apply now?

Douglas Adams said that predicting the future is a mug's game, but I'll go out on a limb and predict this: The children of the Brainwashed Dittoheads will engage in shout-downs and disruptions during the presentations, much as their parents have been doing in town hall meetings. And if there are any consequences or repercussions, their parents will declare that their children's Constitutional rights are being trampled upon.

What next from Operation Chaos? 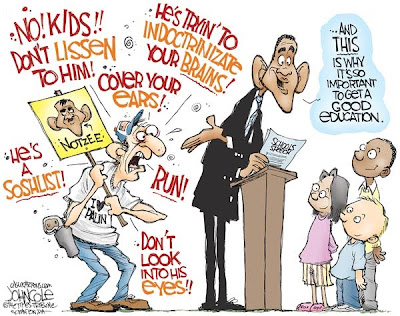