Twenty-four years ago I was living in Mr. Rogers' neighborhood.

Actually I was living in Hamerschlag House on the campus of Carnegie-Mellon University, not far from Fred Rogers' maximum-security condo. (I made eye contact with him, once, as he was driving past me on the access road to his place.) For five weeks - was it July 5th through August 5th? - I was one of eighty students selected from the Intermediate Units across the state of Pennsylvania to participate in Pennsylvania Governor's School for the Sciences. This was an intense, grueling, gut-wrenching boot camp for what I might modestly refer to as the best and the brightest science students from across the state. For five weeks we studied Physics, Organic Chemistry, Discrete Mathematics, Lisp, and Genetics Molecular Biology, along with special concentrations selected by each student, as well as labs and free-standing lectures.

I've written about this before, here and here. It was a great time. Hard, but exhilarating. It made me feel that with enough hard work, I could accomplish great things.

I just looked up the names of the 80 of '84 and am really shocked by the number of people who I simply can't recall. Sadly, I haven't kept in touch with any of them, not really. One I contacted in the Summer of 1985; I had had a crush on her, but nothing developed, and she probably didn't even notice.* I got in touch with another in 1988 shortly after the Flight 103 incident, in which several of her classmates were killed - but, fortunately, not her. I ran into another PGSS alum when I was at the University of Delaware in 1989-1990, and found out he was rooming with another PGSS-er - the former boyfriend of the second girl I mentioned.

A few years ago - more than that, in 1996 or 1998 - I was reading one of the two big popular Astronomy magazines, Astronomy or Sky & Telescope (I subscribe to both) and I came across the name of another PGSS '84 alum. Julianne Dalcanton had written an article on "Ghost Galaxies", galaxies so dim that they are nearly impossible to detect. A while back I decided to look her up online, and found her website. But that was about it, until yesterday.

Yesterday I was going through the comments on Phil Plait's "Ghosts in the Light" post and I came across a link to this cartoon.**

It's funny. You should read it. Though if you don't know what the Large Hadron Collider is, or the pseudocontroversy around it, or who Wil Wheaton is, or who Wesley Crusher is, you might be a little lost.

I have the strange and useful ability to read upside-down text at about the same speed that an average reader reads right-side-up text. Which is to say, I see letters forming words which string together into phrases and sentences, rather than the gestalt chunk-at-once reading that I normally do. It's slow, for me, but it's useful. It's also pretty involuntary. So upon seeing the second panel of that cartoon... 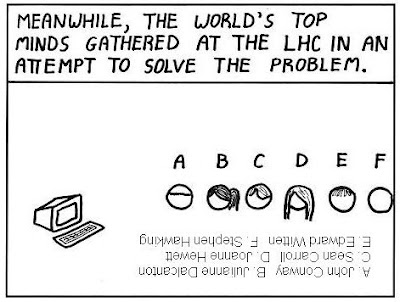 I immediately spotted a familiar name. Well, other than Stephen Hawking. 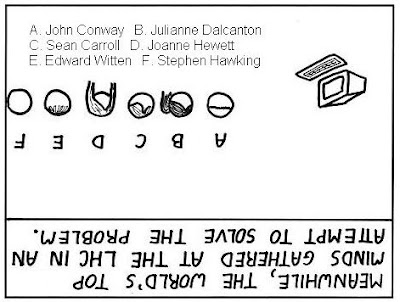 I didn't recognize the other names, but a few minutes of research revealed that several of them co-blog with Julianne at a site called Cosmic Variance. I'll have to add that to my list of regular reads. Maybe eventually add it to the sidebar.

So what have the rest of the 80 of '84 been up to? I have no idea. Some of them, I trust, have gone on to pursue careers in science, and maybe some have entered academia. Others, I am sure, have taken more pedestrian paths - like me.

Heck, next Summer it will have been twenty-five years. Someone may be thinking of a reunion. In that case, I had better start making something of myself, quickly!


*I nearly encountered her again a few years ago, when I saw her name on an e-mail distribution list from a company my company was doing business with. I made some discreet inquiries, but none of the people I spoke with were very helpful. Had that business relationship lasted longer, I probably would have been able to pursue this further...

...but of course, she has a Facebook entry. I need to jump on this bandwagon soon.

** I totally missed the Real Genius reference in the 14th panel. Michelle Meyrink's Jordan is my ideal girl. Well, her and Jane Lane.

Email ThisBlogThis!Share to TwitterShare to FacebookShare to Pinterest
Labels: An autobiography in a million parts, Comics, High school, Science

What a great cartoon!

I really can not believe all the unfounded worries and hype surrounding the Large Hadron Collider.