Telling us what to think

Fossil fuels are amazing things. They are literally concentrated solar energy: sunlight converted through photosynthesis into organic matter that then died en masse in a certain special way that allowed the biochemical makeup of these dead things to be preserved and slowly transformed over hundreds of millions of years into materials that could later be extracted from their stony encasements and distilled into energy sources or used directly as energy sources.

When you burn a bit of coal or light a burner on a gas stove or drive around in your internal combustion engine-powered car you are releasing the concentrated converted solar energy of untold numbers* of trees and plants. It's really a pretty awesome thing, if you think about it. And a pretty frightening thing, if you think about it a little harder - like, about how much of this concentrated sunshine is actually available, how fast it's being used, how long it will last, and how long it will take to make some more.

Energytomorrow.org, an American Petroleum Institute industry advocacy / anti-regulation group, has been on a blitz to make sure you think about this the right way. "Most Americans agree," they tell us, that our country needs more energy - "from all sources." The Americans who agree are smiling and happy, their faces turned upward, ready to embrace the future. And the Americans who don't agree? Well, in their 49% of the pie chart that appeared in the ads that were in heavy rotation just a few weeks ago - lots of ad buying going on here - the Americans who don't agree are looking down, away from the camera. Afraid. Ashamed. Unwilling to face the future, betraying their children and their fellow Americans to a future of dependence on foreign energy suppliers.

The problem is this: current methods of extracting natural gas from shale deposits that underlie some parts of the United States - you know, the place where "Americans" live - are dangerous and have both immediate and long-term effects on the surrounding water table, nearby watersheds, and the people who depend upon these resources. When natural gas extraction begins in an area, local well water becomes mysteriously contaminated, water begins to burn, animals that drink it die - all in what the natural gas extractors maintain are a series of remarkable coincidences.

Now, of course, we can expect anti-progress luddites to make such wild claims. And, after all, is this really such a steep price to pay for energy independence, at least in the short term? The needs of the many outweigh the needs of the few. So what if a few animals die from manganese contamination (a remarkable coincidence, totally unrelated); so what if a few water wells explode (it was eventually going to happen anyway); so what if some people you've never met and probably wouldn't even like if you did have to start getting all their drinking and washing and bathing water trucked in because the stuff coming out of their wells is, by yet another remarkable coincidence, too dangerous to use? All those smiling, forward-thinking people on the pie chart said this is a good thing. The nice lady from Energytomorrow.org told us so! 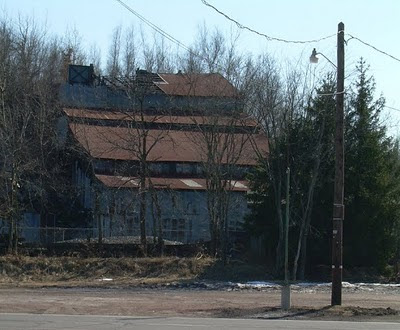 An abandoned coal breaker at the intersection of the Sans Souci Parkway and Dundee Cross Road in Hanover Township, PA

A few years ago there was a nifty ad campaign touting coal as the fuel of tomorrow. It featured young, well-muscled models, men and women alike, flexing and heaving as they toiled in a coal mine to the strains of "Working In A Coal Mine." Today's coal was clean, and extraction was much different from the bad old days. It would be the energy source of the future, and would guarantee America's independence from evil foreign energy merchants, as long as those meddling environmentalists didn't stand in the way. I'm not certain, but I believe the end of the ad campaign coincided with the Sago Mine Disaster in 2006, in which an explosion trapped thirteen coal miners underground for days - and twelve of them died.

Kayak Dude, of The Susquehanna River Sentinel, warned a week ago that the ante was about to be upped, and that the "patriot card" was about to be played. And sure enough, groups like Chesapeake Energy have now launched extensive ad campaigns - in this area, at least - that explicitly link willingness to go along with the unrestricted, unregulated extraction of natural gas with patriotism. If you love America, they're telling us, you won't stand in our way.

Advertising is designed specifically to tell you what to think. If done correctly, it convinces you that the opinions voiced on behalf of the advertiser's client are in fact your own. We have seen plenty of examples of this in the political sphere, where perfectly ordinary people have been manipulated into believing the most extraordinary things - and then loudly expressing these beliefs as their own. It's emotional manipulation. Meme manipulation. And it works.

*Well, I have no idea how many trees and how many days of sunlight went into making a golf ball-sized bit of anthracite or a gallon of gasoline. I'm sure somebody has figured that out.

DB - I need to know...does the commercial really include somethong like this?

If you love America, they're telling us, you won't stand in our way.

No, it doesn't say it literally, but it's implied. I'll poke around for the Chesapeake Energy ad.

Check out all their commercials here:
http://www.chk.com/Media/Commercials/Pages/default.aspx