More insects in my garden

The first time I ever saw a hummingbird moth was in my grandmother's garden more than 20 years ago. I would guess that it was hanging around her Phlox, since they were pink and the one I managed to photograph this past weekend seemed to have a predilection for pink flowers. 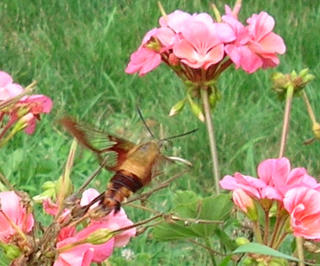 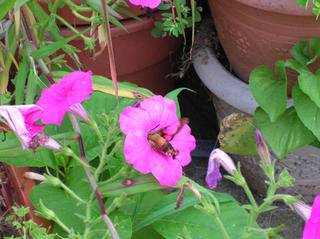 Hummingbird moths are very unusual-looking creatures. This is actually true of most insects - and, hell, most animals in general, when you get down to it. But most people don't take the time to get down to it. Hummingbird moths are not rare, at least in my neck of the woods, and are very active in the day. Hang out around some pink trumpet-shaped flowers (like these petunias) long enough this weekend and odds are you'll get to see one on your own - provided you live in a part of the world where they also live. It would help to have some kids along for the ride. Not so they could scream and run away or try to squish the poor beasties, but so they could start to learn to appreciate the enormous diversity of nature in their own back yards.

I have to admit that I'm a little disappointed with the lack of color among the visitors to my butterfly bushes. Besides the Eastern Black Swallowtail butterflies, the most common critters hanging around are the smaller Silver-Spotted Skippers. 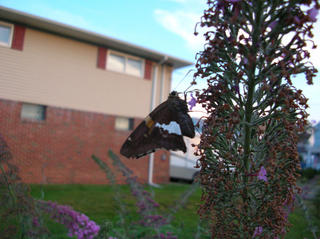 Skippers are interesting to me for one major reason: they are neither butterflies nor moths, but are actually a third sort of big-winged insect that has characteristics in common with both. (I just found this out yesterday morning.)

I also find their coloration interesting. While the large white spot on the wings may serve to break up their overall outline, I can't shake the impression that they look like dark brown butterflies that have just been crapped on by a bird. 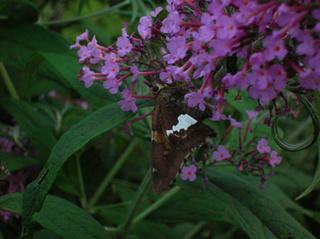 Do birds generally avoid eating things that they have crapped on? (This would explain why no birds have ever attempted to eat my car.)

I have not paid close enough attention in the past to know what the cycles of insects are in my own back yard. Will there come a time when my butterfly bushes will be covered with Monarch butterflies? Will something even more remarkable than a hummingbird moth come swooping out of the sky? I don't know. But I will keep my eyes open, and my camera handy.
Posted by D.B. Echo at 10:00 PM

Email ThisBlogThis!Share to TwitterShare to FacebookShare to Pinterest
Labels: An autobiography in a million parts, Critters, Nature, Photos, Tales of my Grandmother, The Magic of Everyday Life, Yard and garden