This is my favorite photo of me as a little kid. I think I was maybe 3 or 4 when this picture was taken. And, like most things, there's a story behind it. 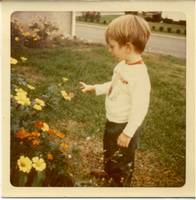 Me with Monarch Butterfly

I had been playing in our back yard and I spotted a Monarch butterfly in our garden. I wanted to reach out and touch it, but my mom shouted "Wait!" and ran back into the house. (This was in those long-ago days when you could leave your child in your own back yard for upwards of several minutes without worrying that somebody was going to come along and do something horrible to him.)

She came back a few seconds later. "OK, now!" she said, and I continued to reach out to the butterfly. It was so beautiful, so delicate, like something made of living paper. I wanted to touch its wings, to see what it was made of.

This picture really gets at the heart of who I am. Curious, fascinated by the natural world, tentatively reaching out to engage it. A three-year-old Naturalist. A budding Scientist.

I don't remember exactly what happened next. I swear I didn't crush it or do anything else to kill it. But I do remember that the butterfly flew away a few feet...and then dropped out of the air, dead.

Yeah, that's me, too! Can't engage the world without causing some sort of damage.

Of course, I was horribly traumatized by the incident.
***
I may have made up for this crime against butterfly-kind many years later. How many years later, I just realized.

It was Autumn, maybe a month into the semester. I was walking the mile-and-a-half from my apartment to my office on campus when I came across an injured Monarch butterfly. Monarch butterflies taste terrible (or so I am told), and are brightly colored to warn predators away...don't bother, their colors say, go try eating somebody else. Not all predators get the message. Apparently one hadn't in this case; it had taken a chunk out of one of the Monarch's wings and spit it out, leaving the butterfly crippled and flightless.

I picked up the wounded butterfly, and it clung to me like a desperate child. I thought, what the hell, and carried it with me the rest of the way to my office in the Physics building.

I happened to have a broken pocketwatch whose glass face had popped off at my desk, so I decided to turn it into a butterfly feeder. A few grains of sugar and a little water, mixed together with a coffee stirrer, became a poor substitute for the nectar the Monarch would have stocked up on before the long flight to its breeding grounds in Mexico - a flight that now it would never take.

I coaxed the Monarch onto my forefinger and then thought about the problem of how to convince it to drink. I vaguely remembered that butterflies taste with their feet, so I thought this would be a good place to start. I maneuvered my finger so the butterfly's front feet waved in the air, then gently touched them to the sugar water. It moved the delicate clawed sticks of its forelegs tentatively in the mixture for a few seconds, and then, amazingly, its coiled proboscis gradually straightened and extended and reached into the liquid. It sucked up the sugar water until it had had its fill, and then recoiled its proboscis and pulled back from the watchglass.

Sugar water does not contain the nutrients necessary for butterfly survival. You should never fill a butterfly feeder with colored sugar water; you will be doing the poor insects a disservice. But I did not have the means to acquire the proper solution, and I did not expect my rescued butterfly to live very long. But it did live, in a hutch above my desk, for something like two weeks. I would occasionally take a break from studying or preparing labs or grading papers to let the butterfly cling to my finger as I inspected its insect anatomy. Sometimes I would blow softly on its wings, and it would tense its broken wings and flap them gently, perhaps remembering the sensation of wind and flying that would be denied to it for the rest of its life.

And after a time, it died. I came back to the office one afternoon to find it still and lifeless. I felt a little sad, but also felt that in some small way I had repaid a debt to a butterfly that may or may not have died because of me some 18 years before.
Posted by D.B. Echo at 10:10 PM

Email ThisBlogThis!Share to TwitterShare to FacebookShare to Pinterest
Labels: A Song of Nanticoke, An autobiography in a million parts, Animal friends, Critters, Death, Family, Grad school, Nature, Photos, Pictures of me, Yard and garden