Romeo was a honey-blonde longhair. The neighbor got him in 2004 or 2005, as part of a pair - "Juliet" was a dark brown longhair. The neighbor had many, many issues. Juliet vanished sometime before the final crisis on 2011 that put the neighbor in the hospital in late August or early September and caused her to die three months later. When I began taking care of Hershey and Baby Boy in her house while she was in the hospital, I found Romeo lurking in the garden outside. I brought him into her house, and we took the three of them into our house when it was clear the neighbor would not be coming back. I soon found that Romeo's long hair was full of fully engorged ticks, which I carefully removed and destroyed.

(Later, when the cleaning crew was removing the accumulated piles of junk from the neighbor's house, they found Juliet's  mummified corpse on the back porch.)

At first Romeo was a nasty cat, rude and aggressive to the others in the house. He ran away a time or two, but always came back eventually. One day he began displaying disturbing behavior - inappropriate pooping, sometimes right in front of me.  I examined his poop and spotted long white filaments in it. Then I noticed they were moving. I knew I had to get him to the vet.

I warned the vet that Romeo might be difficult, that he had a tendency to be aggressive toward other cats. As he and the techs examined him, Romeo began to purr, the first time I had ever heard him purr. He was in ecstasy. He was the center of attention and he loved it. Now I understood. From that point on I made a point to make Romeo the "special" cat, the "featured" cat, once in a while. He was never nasty again.

Romeo's long hair was an issue. We had never had a longhair before, and even with regular brushing and annual haircuts, his hair would get knotted and matted, and he would cough up huge hairballs. I bought a hairball treatment for him that he came to see as his special treat.

The last few weeks he had been uninterested in his hairball treats. He lost a lot of weight. His matting got worse and worse, despite everything I did to brush and comb and tear and cut them out. Last week he stopped jumping up on the windowsill -  I assembled a makeshift set of steps for him. He became uninterested in food over the weekend, though he wolfed down half a can of kitten food Friday or Saturday morning. I began giving him syringes of water and a mineral supplement. Maybe it was already too late.

He was still moving around the house this morning. But when I went to check on him on my first break this afternoon, I found him dead in the bathroom. He was still warm, still soft and flexible. He had probably died just a few minutes before I checked on him.

In the morning we will take him to be cremated. 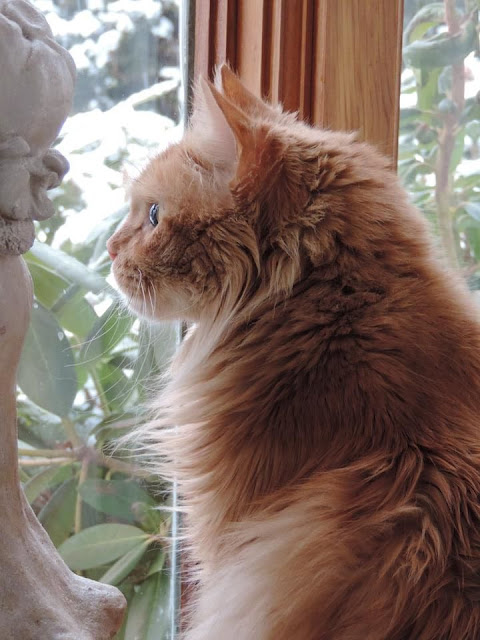 romeo love and a home, it sounds to me that he loved your family in return. I am so sorry. To lose a companion will always hurt. You stepped up and gave