The whole world has gone insane, the (nominally) United States of America in particular. A white male Trump fanatic sent more than a dozen bombs through the U.S. Postal Service t o politicians, public figures, and a news network - all of whom had previously been critical of the God Emperor. A white male with a gun tried to enter a predominantly black church in Kentucky, but found it locked, so instead he went into a local Kroger and murdered two elderly black shoppers. And that story was knocked out of the headlines shortly thereafter when a white male with several guns (including that darling of mass shooters, an AR-15) entered a synagogue in Pittsburgh (about a mile from where I lived when I spent five weeks at Carnegie-Mellon University in 1984) and murdered eleven people while shouting anti-Semitic statements. (In each case, the white male was taken alive.)

Fuck it. Good luck, future historians. Some of us tried to stop this. I know, I know - we should have fucking tried harder.

So anyway, here's a picture of me with one of my cats - Joey, who is over eighteen years old, and probably won't be with us much longer. 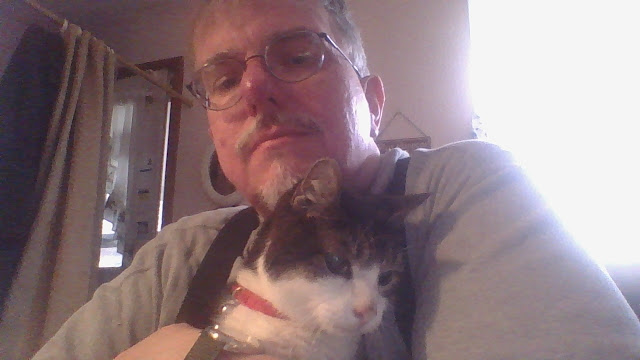