A few weeks ago I received this email:

12/24/09
Subject: Eagle arch??
On a NE PA bloggers webpage there is a picture of a tall, narrow arch with an eagle statue on the top, but no ID. I have a very old photo with that same arch and am trying to place it. Can you help?

This is the picture to which Philip is referring, used as one of the decorative illustrations on the NEPA Blogs sidebar. 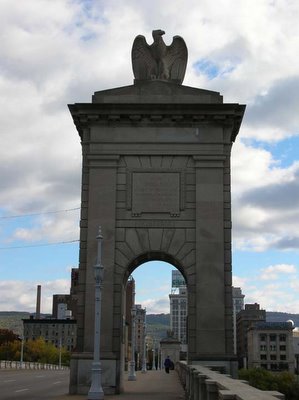 The next day - Christmas - I sent Philip this response:

Those are the eagles on the Market Street Bridge in Wilkes-Barre. Those photos are from an expedition I took in October 2005. I originally posted them on my personal blog, Another Monkey. Here are the original posts:

Philip sent this response the next day:

Many thanks for the identification and the fast reply. I have attached the image I have, which seems to be late 1930s or early 1940s, with half the town turned out to watch the river rise - note the sand bag line. The photo was stuck inside an old book I bought on Amazon.com. I am an historian so this will provide me with a nice little project. Do you mind if I use your images on a PowerPoint slide presentation or small webpage on this photo? I don't know if you live near the place, and I imagine now that I have the place and river, I can run down the event. Thanks again. 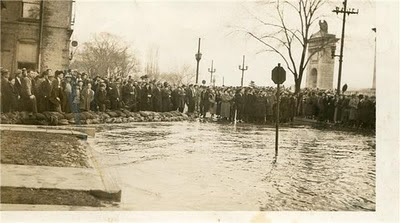 I quickly gave my consent:

Yep, you may use my photos. I'm not sure when the flood in your photo was, but I'm sure the Susquehanna has risen many times. Most notable was the flood associated with tropical storm Agnes back in 1972, though that photo seems to predate it a bit. My friend (and fellow NEPA Blogs administrator) Michelle has a site called "Agnes In NEPA" which collected quite a bit of information about this event.

The Luzerne County Historical Society may be able to help you identify the event associated with your photo.

By the way - I don't know for sure, but that may be the Hotel Sterling on the left behind those people. A lot of those buildings are still standing!

Philip did some detective work, and that same day sent back this response:

Thanks...looks like this flood was 1936*, which fits the people's clothes. Right after the Great Depression. We will be looking like that in a couple more years... :-)

And that was where we left things. But this past weekend I had made plans to take a walk in Wilkes-Barre, and to take a few touristy snapshots. I would be there, I would have a camera - why not try to re-photograph the scene?

This isn't as easy as it sounds. Streets, buildings, and even landmarks could have been modified in the intervening years. Lining up angles isn't easy when you're working with a print-out of the photo in one hand and a camera in the other. I didn't get it right in one shot. It took two.

I'm not sure if this is an exact match. The Sterling Hotel seems closer, and the arch seems farther away. I think the original picture was taken from a point which now would be several feet into the street. Even if I were confident that I would not get run over while standing in the road in the path of oncoming traffic while trying to match the shot, I would certainly be ankle-deep in dirty, salty slush.

There are some obvious changes. The sidewalk is different - I think in 1936 it was a series of concrete slabs interspersed with asphalt driveways, though that certainly could be dirt. There is a window on the first floor of the Sterling Hotel (commonly referred to as "The Hotel Sterling") which has been bricked over in the intervening years, but the bricks forming the arch over the window are still visible. A marquee was added sometime prior to 1972, because my mom remembers flood water coming right up to the marquee when Tropical Storm Agnes caused the Susquehanna to flood thirty-eight years ago.**

The Sterling looks like a wreck, and I have assumed that it is slated for eventual demolition. But I have been told that there are plans to renovate it and incorporate it into the downtown Wilkes-Barre riverfront complex.

None of the trees in the old photo appear to have survived. It would not be impossible for a, say, ten-year-old tree to survive another seventy-four years, though trees in urban settings tend not to survive and thrive as well as trees in suburban and rural settings.

I scrutinized the original and could not see any children.*** Only adults seem to have turned out to witness the spectacle. Seventy-four years later, I doubt any of them - more than a handful - are still alive.

I presented my new photo to Philip, and after some discussion we decided that I would publish these before-and-after photos here on Another Monkey. If the Sterling Hotel is demolished or substantially altered at some point in the future, it will no longer be possible to recapture this scene in this same way.


*This is known as the St. Patrick's Day Flood of 1936. From the Luzerne County Riverfront Project site:

Although numerous floods occurred in the Wyoming Valley, and some levees had been constructed to try to prevent wide-spread flooding, the valley was unprepared for the flood that struck on St. Patrick’s Day, 1936. That day the Susquehanna crested in Wilkes-Barre and Kingston at 33 feet, and flood waters flowed for miles across the Wyoming Valley.

The devastation wrought by the 1936 flood brought construction funding from Washington in the form of a valley-long, flood protection levee – at a flood stage of 36 feet. Subsequently, the Susquehanna River rose to flood stage in 1946, 1955, and 1964, with the levees providing substantial protection.

This protection lasted until 1972, when Tropical Storm Agnes caused the river to rise to 40.9 feet - overtopping the levees and flooding Wilkes-Barre and much of the Wyoming Valley.

**Thirty-six years passed between the flood of 1936 and Agnes in 1972. Thirty-eight years have passed since Agnes. As I write this I am temporally farther from Agnes than Agnes was from the flood of 1936.

***On closer inspection, it appears there may be several: one on the extreme left of the photo - second from the left - and two or three others just to the right of the front of the Sterling Hotel.
Posted by D.B. Echo at 12:40 AM

Great post! Just throwing out there that I am searching for photos of the Kirby Park Zoo which was wiped out with the flood of ’36…..
Photos of what remains of the zoo (hope it’s still there after this week’s flooding!):
http://www.flickr.com/photos/cheri_sundra/sets/72157624116662929/

Great article. Just to update a little bit. A few weeks ago Wilkes-Barre and the Wyoming Valley was battered by another flooding event from Hurricane Irene. The mighty Susquehanna river rose to its highest level on record. • Actual crest of the Susquehanna River at Wilkes-Barre at 7 a.m. Sept. 9: 42.6 feet Crest of the Susquehanna River at Wilkes-Barre after Tropical Storm Agnes in 1972: 40.9 feet. Wilkes-Barre city now has a levee system that protects it. Height of the Wyoming Valley levee, including 3-foot free board: 44 feet. Not all of the valley is protected though. The Market street bridge has flood walls that are put up. They leaked during this tragic event and the Hotel Sterling had feet of water in it. The Hotel has now been deemed an immediate danger of collapse and the city and the owner of the Hotel Sterling (City Vest) are trying to get money to demolish it. Very sad. The hotel was magnificent in its day and would have been saveable if action was taken sooner to restore it.