The Wyoming Valley offers amazing vistas and panoramas, even to the highway commuter. Interstate 81 rides along the side of the mountains that form the south edge of the valley. From this vantage point you can see across the valley to the north, as well as far along the mountains to the east and west.

I have been commuting along this route for nearly half my life. I have watched things change over time, new construction appear, old landmarks disappear, even whole new vistas presenting themselves when some culm banks and an inconveniently-placed outcrop of mountain were removed as part of a road project some ten years ago.

Lately I've noticed some new lights on the mountains. One group I never noticed until about three weeks ago. It looked like a small city, a line of amber and white lights situated near the top of a mountain ridge called Penobscot Knob, the location of the towers that broadcast radio and television signals to much of the Wyoming Valley.

I've tried to observe these lights from multiple positions, which is not an easy or particularly safe thing to do when most of your observations are being done from a moving car. But eventually I narrowed down the location of the lights. Using Google Earth, I determined that the lights appeared to be situated along a known road. The road running through Laurel Run. The road that used to be an extension of Northampton Street in Wilkes-Barre, once the longest road in the state of Pennsylvania.

The road that goes up Giant's Despair. 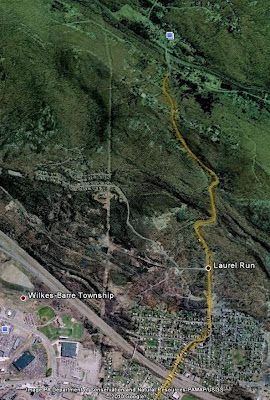 I have gone up this road at least three times in the past. I have even come down it once. It is terrifying. Steep, full of twists and turns. Hard on your engine going up, hard on your brakes coming down. Followed to its end it meets up with Route 115 in Bear Creek, which absorbed the remainder of Northampton Street for the long trek south to Brodheadsville. (Route 115 has a long and storied history; it has also been the scene of several fatal accidents recently.)

The snow which crippled so much of the eastern seaboard this weekend barely touched Northeastern Pennsylvania. Nanticoke had less than an inch, other areas just a dusting. The road leading up Giant's Despair was clear and dry. And this evening I found myself in that part of the area. Well, what the hell?, I thought.

The Giant's Despair Hillclimb is an event first established in 1906. Part race, part endurance event, it is a test of a driver's skill and a car's stamina. Here is a dashboard video from one of the participants in the 2009 event:

Pay special attention to the 23 second mark, when the horizon vanishes and all you can see is road. I was doing 15-20 miles per hour for this entire stretch, so my windshield showed nothing but road for very long times. And I was doing it around 8:30 at night. In a fourteen-year-old car with more than 315,000 miles on it.

But I made it.

I found the lights, too, I think. It looks like they're coming from a new housing development near the summit of the hill where the houses have randomly aimed white and amber security lights. New light pollution from houses built in a ridiculously inaccessible location. How do they get their water? Where does their sewage go? Who ran utilities up to them? Who plows their roads? Who will come to save their houses when they catch fire?

I cruised past the housing development and then through the towers on Penobscot Knob. That's an eerie feeling, slipping between these enormous towers like a football through giant goalposts. Then a slight rise, and a long, shallow cruise down the other side of the mountain to meet with 115 and continue my descent back into the Wyoming Valley.

It was scary. But it was also somewhat exhilarating. And I think I solved a mystery that has been bugging me for the past few weeks.
Posted by D.B. Echo at 11:30 PM