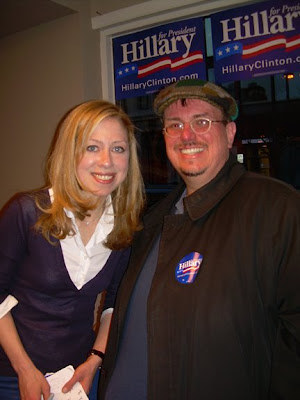 Well, I was going to do a post on my experience of waiting in a long line to hear Hillary Clinton speak at a high school in Scranton yesterday. I was going to mention the transvestites (or, as they called themselves, "HOMOS FOR HILLARY!"), and the T-shirt and button hawkers, and the Obama supporters, and the lone Republican with a sign that said "VOTE REPUBLICAN NOT SOCIALIST", and the two hours spent waiting in line, and the way the Gym filled up completely when I was still about 500 people away, and how the orderly re-routing of people to the auditorium (where we could hear her over a P.A. system, but not see her) turned into a mad scramble, and how after her speech to 3500 screaming fans in the auditorium gymnasium she actually came to the auditorium to see and speak with and meet with the several hundred of us in the overflow crowd.

I was going to do a post on all that. But I'm too tired to get into any of that right now.

See, I'm tired because I learned this morning that Chelsea Clinton would be coming to the grand opening of her mom's Scranton campaign headquarters at 5:30 this afternoon. Well, shucks, I thought, I could do that. So after work today I headed over to the parkade near Tink's where I always used to park back in those days and hiked the two blocks to the headquarters.

Unlike yesterday, when I headed for the event without a coat or hat because a) I figured it would be very hot in the auditorium and b) I figured the less I wore, the less of a hassle security would be, this time I decided to wear both hat and coat in anticipation of a brief and chilly outdoor event. So, naturally, I cooked for nearly three hours inside the crowded, stuffy, one-room headquarters.

But I got to see Chelsea! See her, hear her (she's an excellent speaker!), talk with her, shake hands with her, get her autograph, and - thanks to a very nice lady and her very nice daughter - get my picture with her. (Thank you very much! So sorry to hear about your cannibalistic hamster.)

We have not seen the last of her. She will be speaking tomorrow morning at Wilkes College, and she told us she will be in the area for the next two weeks - will she be with her mom at the Scranton St. Patrick's Day Parade this Saturday? (If you thought traffic was bad normally on Parade Day in Scranton, you ain't seen nothin' yet.) And she promised that we will be seeing lots of Clintons over the next few weeks. I wouldn't mind seeing her again, or her mother. But after them, who else is left?

Now, I wonder when Barack will be coming around here?
Posted by D.B. Echo at 9:38 PM

Email ThisBlogThis!Share to TwitterShare to FacebookShare to Pinterest
Labels: Pictures of me, Politics

DB doing what he does best. Hanging with the babes.

Sounds like you're a Clinton groupie. Not that there's anything wrong with that.

Well, a Chelsea Clinton groupie, maybe. She's a much better speaker than either of her parents. And Bill's popularity with me has slipped over the last few months. I think he would help Killary best by stepping out of the campaign entirely and focusing on running a Foundation or something.

I am eager to hear what Barack Obama has to say to the people of NEPA. When is he coming here?

Ok, but here's the most important question: Did you give her your blog address? Tell her about Nepa blogs?

Aaaagh. I should have. But I didn't.

Well, maybe when she does a Google search on her own name, my site will come up!

Just as good - Gort is the number 1 search result when you Google "chelsea clinton" and scranton!

There is something for you at my place.