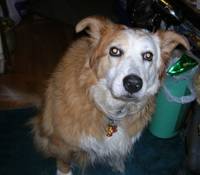 These are all of my blog entries that mention my dog Haley or our walks together. Entries marked with an asterisk (*) only mention Haley tangentially.

First dogwalk in ages (includes a picture)
Monday, July 12, 2004
Haley and I resume our long-suspended walking program. At the time I never would have suspected that it would come to an end just over ten months later.

The Dog is a Harsh Mistress
Thursday, July 15, 2004
Our walks continue - Haley makes sure of that.

CD release parties and ragweed
Thursday, July 22, 2004
A description of the morning as experienced on one of our dogwalks.

So...very...weak...
Friday, July 23, 2004
Catching up on sleep and getting into an adventure (recounted in Getting Involved.)

Getting involved
Saturday, July 24, 2004
A dogwalking adventure: an account of the previous day's encounter with a bickering couple and a police station on its off-hours.

Down wit da clown
Tuesday, July 27, 2004
I get a pedometer (or "stepometer") and began measuring the length of our walks.

Less than a week to go!
Sunday, August 8, 2004
Days before I go on vacation, we establish that our longest dogwalk ever was about 3.2 miles.

Ye doom is ycomme true
Thursday, August 12, 2004
The one-month anniversary of our walks.

Last day of Summer
Tuesday, September 21, 2004
Guess what this one is about.

Fool in the Rain
Sunday, October 3, 2004
We get rained on. Twice. And almost run into the bickering couple again.

Snow
Tuesday, November 9, 2004
Haley and I walk through the first snow of the season.

Aurora!
Wednesday, November 10, 2004
Haley and I see an aurora, and establish a lower limit on temperature for dogwalks.

Cards
Thursday, December 9, 2004
Mailing Christmas Cards during a dogwalk, and a "Was that always there?" moment with a mailbox.

Hooray for late-night retailers
Wednesday, December 22, 2004
Temperatures drop dramatically, and we suspend our walks. We would not resume until after Haley's diagnosis at Cornell.

Another Monkey's Greatest Hits, Volume 1
Sunday, January 30, 2005
My first selection of blogs, including links to some of the Haley blogs.

Everything dies
Thursday, February 3, 2005
We learn that Haley has cancer during a trip to Cornell's veterinary school. Their diagnosis is that she has two to three months to live. (She lived for three months and three weeks.) Also, a remembrance of past pets, and a resumption of walks.

Haley visits the Poconos (includes pictures)
Sunday, February 6, 2005
Haley goes for the first of her last two visits to my friends' place in the Poconos, and meets with her dog friends Autumn and Legolas.

Vacations that are not vacations
Wednesday, February 9, 2005
Planning out my leftover 2004 vacation time to maximize time spent with Haley.

Legs
Friday, February 11, 2005
Haley begins to show signs of leg weakness, causing walks to be scaled back in intensity. This symptom would not manifest itself again until her final two days.

The Ruins (includes pictures)
Tuesday, February 22, 2005
Finally, the adventure referred to in the previous two posts. Haley and I take a daytime walk around some of the older structures in Nanticoke.

Cemetery with mountains
Monday, March 14, 2005
A view of the mountains as seen on one of our walks.

Purse snatchers and synchronicity
Monday, March 21, 2005
Another dogwalking adventure: averting a possible purse snatching just by being there.

The corpses of 1,000 snowmen
Thursday, March 24, 2005
Walking through the beginning of one of the last (and heaviest) snowstorms of the season.

Pumping the night away
Tuesday, March 29, 2005
An update on Haley's condition, set against the background of basement flooding.

Scenes from the aftermath of a snowstorm*
Saturday, April 9, 2005

An American portrait
Wednesday, April 13, 2005
A view of Nanticoke along one of our walks.

What I Did On My Summer Vacation, Part 1
Sunday, April 17, 2005
"Now it was time for a quick dinner - Burger King hamburgers, shared with Haley..."

Entering the world of digital photography (includes picture)
Monday, April 18, 2005
Oh, God. I didn't realize how beautiful this picture of Haley is until just now. The way she would look at me... Status update: Haley is still doing very well.

Three reasons I take Haley out for a walk at 5:30 every weekday morning (includes pictures)
Sunday, May 1, 2005
Three photos from our morning walks, including one of Haley.

Morning Dew and Sunrise Behind Skatarama
Friday, May 6, 2005
Two more photos from our morning walks.

On death and dying, part 1
Saturday, May 21, 2005
The beginning of the end. Haley had stopped eating the day before. Also, a scheduled visit to the vet gives us the final bad news we were expecting.

Movie paranoia
Sunday, May 22, 2005
On the last full day of Haley's life, I go to the movies - forcing my mom to abandon her place in the deathwatch at her brother's bedside and instead spend a few hours with Haley.

Haley is dead
Monday, May 23, 2005
An account of Haley's final hours, written a few minutes after I found Haley dead in her bed.
And I want no part of any Heaven that will not admit dogs.

A parable
Monday, May 23, 2005
A story from The Twilight Zone written by Earl Hamner Jr., by way of my priest's sermon-writing service.

Email ThisBlogThis!Share to TwitterShare to FacebookShare to Pinterest
Labels: Haley

I'm sorry about Haley and your uncle...cancer sucks. I'm glad for Haley's sake she went in her sleep. She was lucky to have such a loving owner!

I'm sorry to hear about both of your recent losses. I haven't been online for several days and, ashamedly, did not know to comment sooner.

I always enjoyed reading your posts about Haley. I am living with a dog in his twilight years and can relate to many things you've posted about.

I agree with Jen, Haley was as lucky to have you as you are to have had her. And for you...

THE CURATE THINKS YOU HAVE NO SOUL
The curate thinks you have no soul;
I know that he has none. But you,
Dear friend, whose solemn self-control,
In our foursquare familiar pew,
Was pattern to my youth -- whose bark
Called me in summer dawns to rove --
Have you gone down into the dark
Where none is welcome -- none may love?
I will not think those good brown eyes
Have spent their life of truth so soon;
But in some canine paradise
Your wraith, I know, rebukes the moon,
And quarters every plain and hill,
Seeking his master... As for me,
This prayer at least the gods fulfill;
That when I pass the flood and see
Old Charon by the Stygian coast
Take toll of all the shades who land,
Your little, faithful, barking ghost
May leap to lick my phantom hand.

Thank you, Anne. And thank you, Jen.

That was a beautiful poe, Anne.
I read it aloud so Miss Haley would hear. :)

Something I also meant to add was that you keep saying you "forced" your Mom to sit with Haley. I bet she is thinking that was a wonderful gift you have given her now that Haley has passed. She spent the last few hours with BOTH of her loved ones. Just when it counted.