I wrote about NASA's Dial-A-Moon a while back. It's a very useful site for knowing the phase of the Moon at any hour of any day. The site is only set to cover a single calendar year, and a new version is released every year. I knew that the waning crescent Moon had vanished in the morning sky a few days ago, and wanted to see if I might have a chance of seeing a thin sliver of the very young Moon in this evening's clear sky. I peeked out the front door and saw nothing. So I went to the site - the new, 2019 Dial-A-Moon site - and saw this: 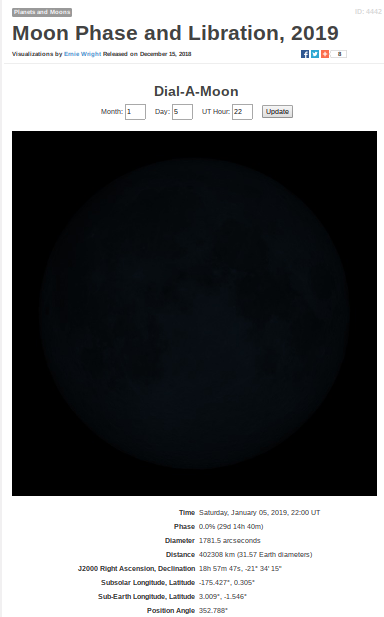 ...the hell? Has the Trump Shutdown (the third one of his time of occupying the White House, and the third one that he entered into with Republican control of Congress) extended even here? Will there be no Dial-A-Moon as long as Trump continues to hold the Federal government hostage over his wall fetish?

No. I just happened to hit the site when the Moon was at 0.0% illumination. New Moon = "no Moon." Some parts of the world actually experienced a partial solar eclipse today, the first of the new year. And because of the way these things work, this will be followed by a lunar eclipse in just over two weeks, the evening of January 20 and morning of January 21. This will be a total lunar eclipse, and will be visible from all of North and South America. I hope I can get pictures like I did in September 2015!

Email ThisBlogThis!Share to TwitterShare to FacebookShare to Pinterest
Labels: Eclipses, Politics, The Moon