Eclipses have seasons, and travel in groups of two or three. The seasons are complicated and are dictated by the way the orbits of the Earth around the Sun and the Moon around the Earth interact. In 2021 there were two eclipses in the Spring (total lunar on May 26, annular solar on June 10) and there will be two more in late Autumn (near-total lunar on November 19, and a total solar on December 4.) I was lucky enough to be in a position to view both of the Spring eclipses.

Unfortunately for me, both of these eclipses were visible in Nanticoke at or around sunrise - and I work the late shift.

On May 26 I forgot about the eclipse completely. Only the very earliest stages would be visible to me, and only at sunrise, as the Moon slipped beneath the Western horizon. Still, I stayed up all night for unknown reasons, and became aware almost by accident that the Moon was glowing bright red in the front window. I quickly grabbed my camera and tripod and snapped off a few photos of the rapidly-setting Moon through the curtains, through the window, and between the houses across the street. 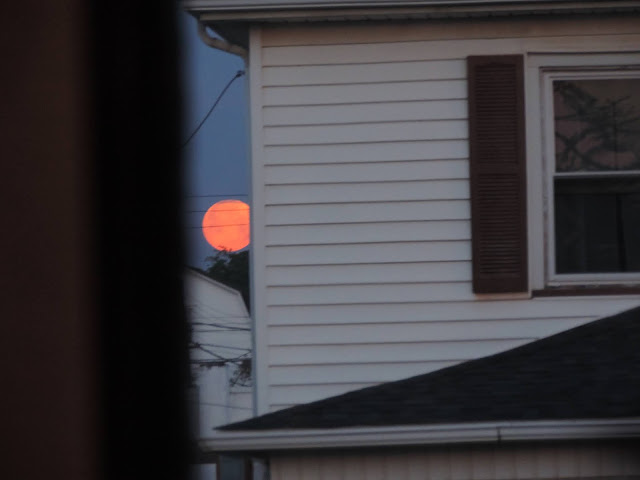 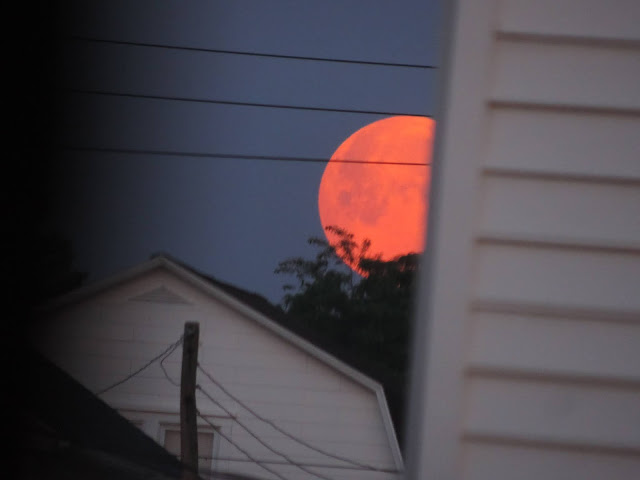 The June 10 eclipse was different. I made plans to view it. I chose my viewing spot: the eastern high school parking lot, overlooking the Little League field - which would have been an ideal spot to observe Comet NEOWISE last July, I realized a few days after the fact. I woke up at 4:45 AM, about three and a half hours after I had fallen asleep, drove the half-mile to the high school, parked the car, and set up a few minutes before the 5:29 AM sunrise.
The minutes dragged on. Sunrise time came and went, and all that happened was that the horizon - the mountains that frame the Wyoming Valley - got a bit brighter. As a sun pillar formed, I realized the Sun was about to rise behind a copse of trees, and I would miss the rising eclipsed Sun at its dimmest and most photogenic. I grabbed my camera and tripod and ran thirty feet to the right, where the Sun would be clear of the trees. 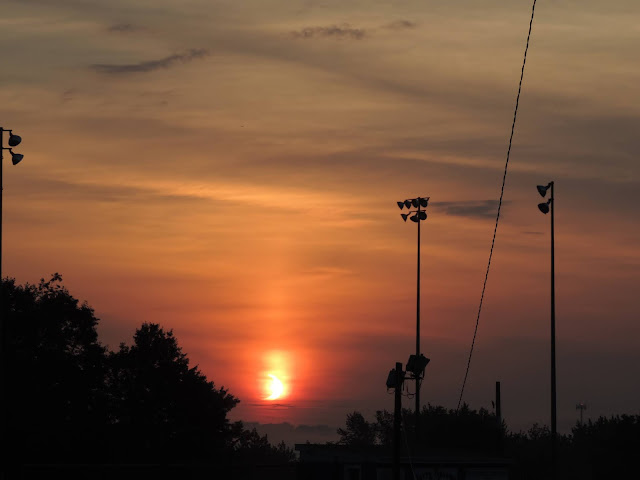 The camera tried to adjust the exposure to balance the brightness, making the rising Sun difficult to see. I was shocked to see the sun rising as a shining crescent. I had expected a much smaller bite to be taken out of it, but I had also heard that it would be 75% covered for Northeastern Pennsylvania. I wondered what someone who had managed to miss the news of the eclipse might think if they accidentally caught a glimpse of the glowing scimitar on the horizon. 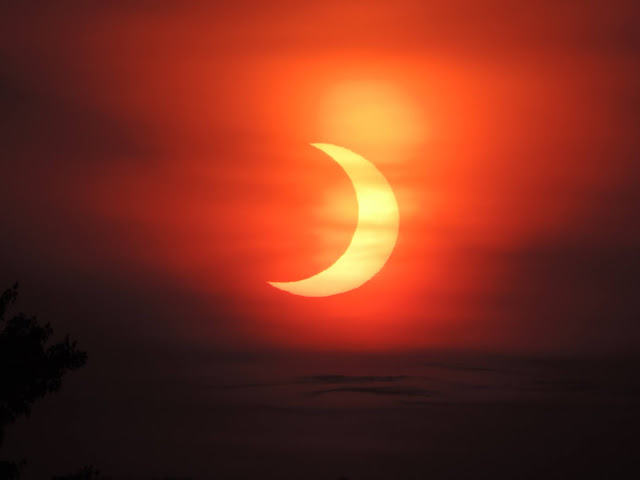 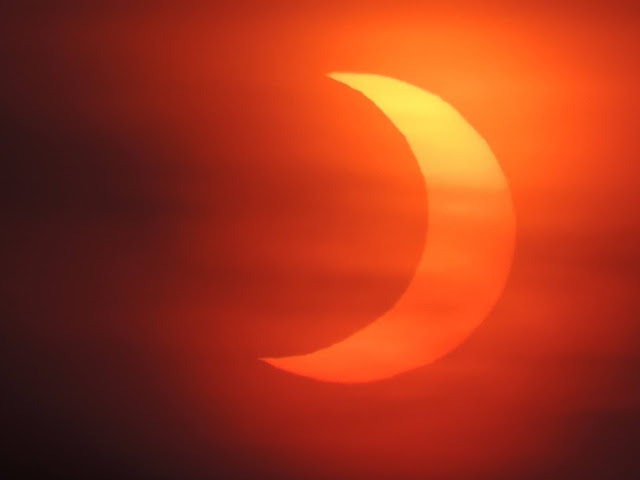 It was possible to observe the rising Sun, filtered through hundreds of miles of atmosphere, without risk of eye damage - but only briefly. After less than a minute the Sun was painful to even glance at, and I was worried the intense light would damage my camera. I packed up my camera and tripod and headed home.

Just months after COVID-19 vaccines became widely available in the United States, infection rates have plummeted to numbers not seen since March 2020, and death rates have slowed to nearly flatten the cumulative death curve. Eligibility is expanding to younger and younger age groups. Still, it is looking like the country may fail to achieve President Biden's goal of 70% of the population having received at least one shot by July 4, thanks to a small but dedicated group of people who claim that the vaccine is worse than the disease. These people will continue to serve as a reservoir  for COVID-19, breeding variants, waiting to infect those who cannot take the vaccine for legitimate reasons of health, waiting to infect those who are vaccinated but who have only 95% protection against COVID-19. 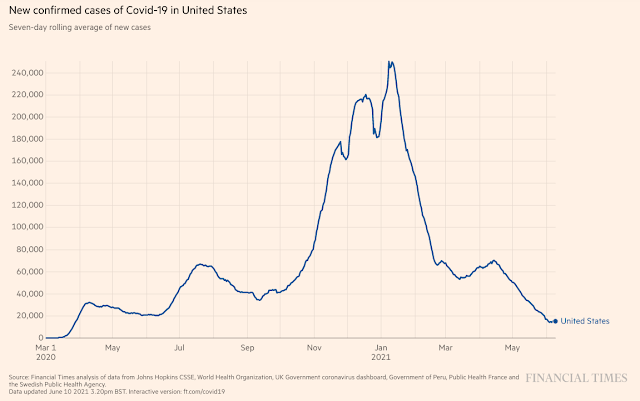 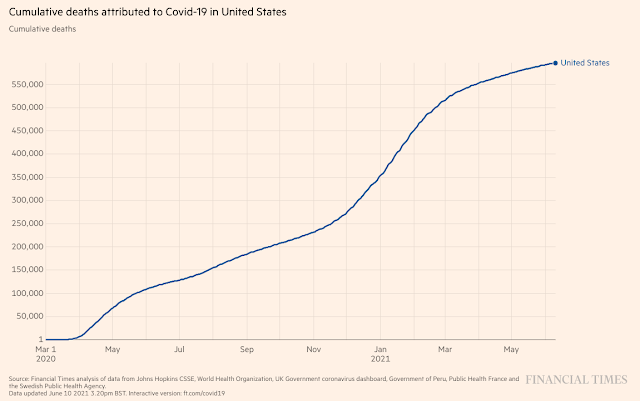 Meanwhile, in India, new cases of COVID-19 are down significantly since mid-May, but cumulative deaths have nearly doubled since mid-April. 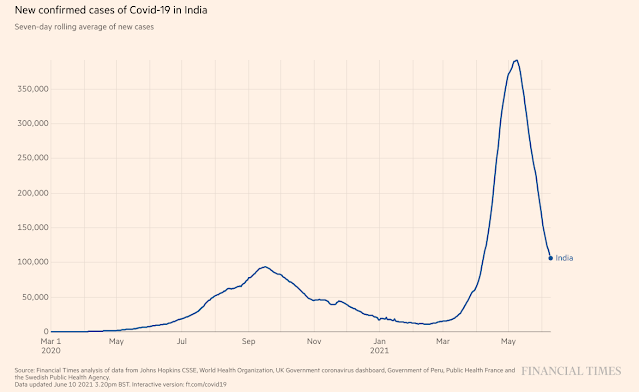 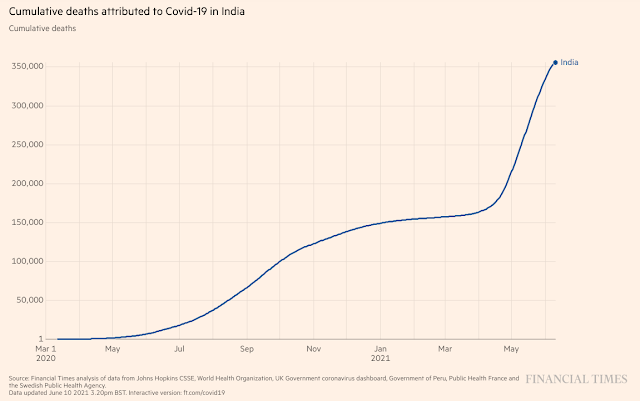 The United States is poised on the brink of a return to normalcy, following nations like New Zealand who have been there for months. Will the rest of the world be heading the same way?
Posted by D.B. Echo at 1:22 AM