I received my second dose of the Moderna vaccine on March 6, 2021, four weeks after my first dose. Two weeks later, on March 20, 2021, I was officially "fully vaccinated."

Like so many others, I celebrated with a trip to the dentist.

It wasn't my first trip to the dentist during the pandemic. It was actually my second. My first had been on February 6, the same day as my first Moderna dose. I hadn't planned on going until two weeks after my second dose, but a shattered molar - a very common stress-related phenomenon during the pandemic - caused me to bump up my plans. During the routine exam, the dentist spotted a few cavities that had taken hold in the two years since my last visit, and she scheduled a follow-up for March 6, the day of my second vaccination. I begged off and was able to get rescheduled for two weeks later, coincidentally the day I officially reached "fully vaccinated" status.

I had big plans for that day. One of the few remaining "gray lady" banks in Nanticoke had announced that it would be closing, and I suspect that it may be demolished soon. We have family history with this bank - my grandfather worked there as a maintenance man after his jobs as a foreman the local silk throwing mill and at an out-of-state auto factory ended.  I planned to go out and photograph the three remaining buildings, much as I once photographed the churches of Nanticoke. I also planned to return to the cemetery where I took the photo of the crocus in the previous post. (Had I gone there, I might have seen some new flowers growing up huge on the other side of the headstone, flowers that looked like crocuses but three times the size of normal crocuses, flowers that would be withered by the time I got there a few weeks later.) I planned to go shopping at stores I hadn't been to in over a year. Maybe I would make a pilgrimage to Hillside Farms to commune with the animals. But first, I wanted to go grocery shopping.

The dental appointment didn't take long. Less than an hour, start to finish. After it was over, I walked to the post office next door and bought some stamps for my mom. Then I drove the car about a hundred yards to the grocery store across the street.

I had a lot to buy. I took my time, trying to feel more relaxed. I was fully vaccinated. I didn't have to be afraid anymore.

About an hour later I exited the store with my purchases, loaded the car, put the cart away. I got in the car, put on my seat belt, turned the ignition.

When I had the car inspected in January, the battery test came back with a 60% charge. This seemed low for a battery that had been installed little more than two years earlier, on October 31, 2018. The guy from AAA who came to the supermarket parking lot to give me a jump confirmed that the battery was now at 50% charge and should be replaced. I asked him how long batteries usually lasted these days. He said most lasted at least three years. I guess I was just lucky.

(The battery hadn't died because I left the lights on or anything like that. Starting a car drains a battery tremendously, and it recharges as you drive. Starting the car, driving it a hundred yards or so from the dentist's to the supermarket, and then trying to start it again probably drained it past the point of useful charge.)

After I got a jump I took the car on a forty-mile round trip, but then parked the car for the weekend. No outings or adventures on that battery. I was able to make an appointment to get the battery replaced early the next week at the same shop where I had had the inspection in January, a shop several generations of my family have used through several generations of the owner's family. I asked the owner - who is also the chief mechanic -  about why the battery might have died so quickly. He said it was because the car has mostly been used for short trips once or twice a week for the past year, combined with cold winter weather. I asked it this was something he was seeing more of lately, and he pointed to a line of replaced batteries on the floor. Like shattering molars, dead car batteries are another side-effect of the the pandemic.

A week later, March 27, I had to run out to pick up some Easter chocolate from a local candy maker. After I loaded up the trunk with chocolate, I decided to go on my delayed shopping trip.

I started with Barnes & Noble, the last bookstore in the area. Barnes & Noble had been badly damaged by a tornado in June 2018. (A corner of the building was torn off, though the structural integrity remained good, and much of the interior went undamaged - many tables stacked with books went untouched.) The store remained closed for the rest of the year while the damage was repaired. I missed the grand re-opening in January 2019, and then didn't go there for one reason or another for most of the rest of 2019. I last stopped in back in February 2020, and bought a softcover of Neil Gaiman's collection Trigger Warning, which I would read and reread throughout the next year.

I was nervous about entering the store. I didn't know what to expect. I immediately noticed that the bargain books section had been reduced to a single small table and an overloaded cart. The shelves had been rearranged in a strange way, with shelves butted up against adjacent shelves at right angles, creating a sort of labyrinth that made it very difficult to move quickly through the store, especially if you are trying to avoid other shoppers. I forgot why I was there and what I was looking for. Surely I wasn't just browsing? I decided to seek out more Neil Gaiman, only to find that he was absent from the Science Fiction section. I wound my way through the labyrinth to the adjacent Fantasy section, and located a few of his titles. I picked up paperbacks of Fragile Things and Smoke & Mirrors, each priced at half as much as the softcover I had bought a year earlier. Satisfied with my selection, I hurried to the periodicals department. I briefly considered picking up the latest New Scientist, Skeptical Inquirer, or Fortean Times, but in the end I just wanted to get out. I found my path to the checkout obstructed by other shoppers and had to swing wide. Finally I was checked out, out the door, and on my way back to the car.

Next up was Lowes for a new amber low-intensity LED lightbulb for my triple-headed light. Then to Michaels Arts and Crafts for some floral foam, and Dollar Tree for various items - most of which they didn't have. For all of these places, this was my first visit in well over a year. I was double-masked and running in every store, breathing as little as possible.

Finally I stopped at Burger King to use a coupon to get dinner for that night and the next few days. The drive-through there was extremely crowded, and this stop alone took nearly half an hour.

I got home about three hours after I had set out for the candy store.

Later that week I took my mom (who became fully vaccinated two days before me) to a appointment in a hospital. We rode in an elevator. I sat in a waiting area for an hour. None of this would have been imaginable a month earlier.

Last Sunday was Easter. We got together for dinner with my brother and his family (all fully vaccinated several weeks before us) at their house. No masks. No distancing. The first time we had been together  indoors in close contact in well over a year.

I've made plans to meet with a group of friends over the Memorial Day weekend, and with another group the Sunday after Mother's Day - all fully vaccinated. I'm eagerly waiting for other friends to get their first shots this week, so their countdown to full vaccination can begin.

The downward plunge of cases has slowed, stopped, and reversed - and now case counts have slowly crept up to a level last seen in late October, or at the height of the Summer Surge. We're not done yet. Vaccinations are continuing at an admirable pace, but we still have a way to go. 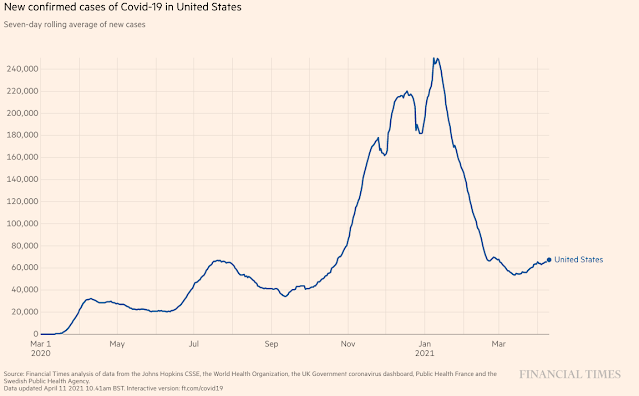 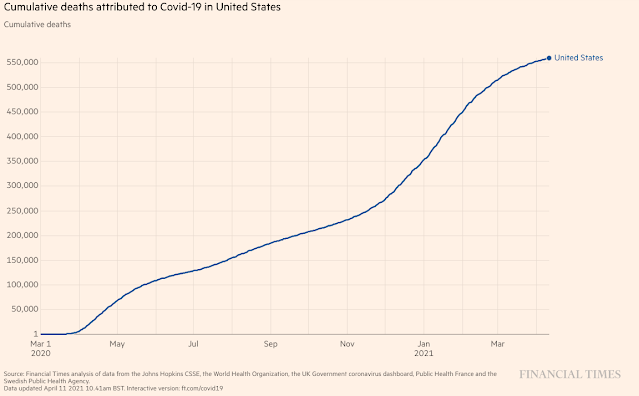 Good to catch up with you. Enjoy hearing about how you're doing and especially your take on living in PA.