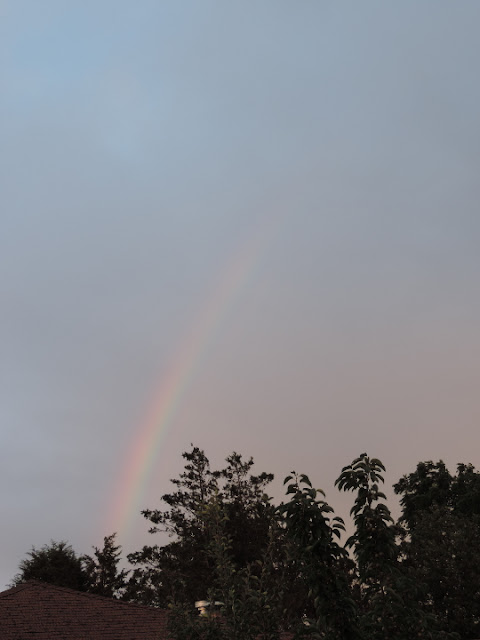 For the last photo in this series, I've chosen a rainbow.

Why this image? I've got lots of pictures of rainbows; this isn't one of the better ones. It's dim, it's only a partial arc, you can't make out any secondary bows. Why this rainbow?

I wanted to pick for my last image something that wasn't just beautiful, but was also recent, and held some meaning for me. Recent nature photos posted to my blog were hard to find. I found myself considering just grasping at something: snow on roses, a pseudoscorpion, a landscape from Ireland.

Then I remembered this rainbow, and its significance. How it appeared over our late neighbor's house just hours after I had accompanied her dog, a dog we had taken care of for four years, to the vet's one last time, to see him off and hold him and hug him as the doctor injected the drugs that would slow his breathing and stop his heart. And there, over his old house, a rainbow that seemed to start at the roof and end in the sky.

I figured this was as good a place as any to end my seven days of nature photos. I hope you enjoyed these posts. Thank you for reading them.