We knew it was coming.

I wish I had saved the tweet. That tweet that someone posted from when the news was just starting to leak out of China in December or early January, news about a highly contagious respiratory disease, a sort of superflu with deadly consequences, rapidly spreading beyond the major city (and international airline hub) of Wuhan. Someone wrote "THERE. That's it. THAT'S what was missing."

On Sunday, January 26, 2020 I was coming back to Nanticoke from a quick afternoon shopping trip. I decided to come through the newly-reopened new road that runs between Route 29 and Kosciuszko Street. Driving past all the newly-built warehouse distribution centers, I thought about all the low-to-middling-wage jobs that had been brought to the area, and wondered how long we would be able to hold onto them - and what it would take to disrupt them. I got home and was greeted with the news that Kobe Bryant, his daughter, and several others were killed in a helicopter crash. The next day, USA Today ran this on their front page: 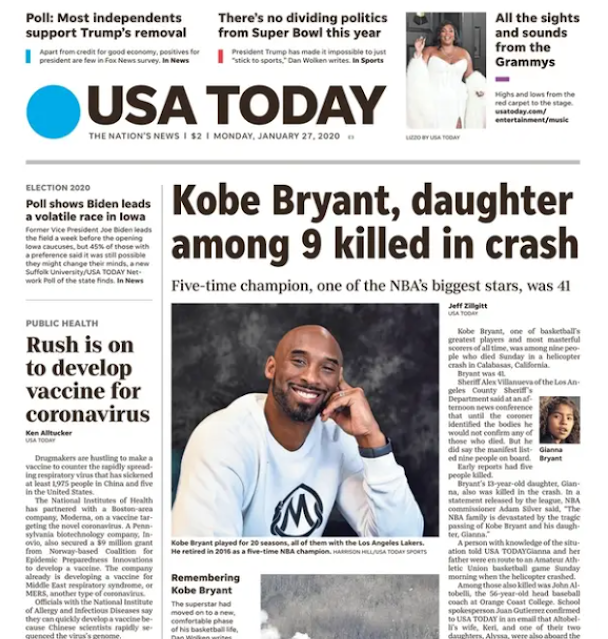 Even then, we knew.

We watched through February as the disease raged through Seattle, and New York, and Los Angeles, and San Francisco. We heard about the special affinity had for nursing homes, chewing its way through the captive resident populations. Prisons, too. We watched the first cases appear in Philadelphia, and then in the counties bordering New Jersey. We knew it was here in Pennsylvania. It would just be a matter of time.

One of the first deaths in the area was a man from Hanover Township - or was it the Hanover section of Nanticoke? - who had just come back from a trip to Italy, where the disease was burning through the highly sociable population.

Saint Patrick's Day weekend came, and suddenly people realized there was a stark choice to be made:  go out like nothing was wrong, or stay home. A lot of people made one choice, a lot of people chose another. Everybody went back to the office on Monday, one big happy workplace family.

Las Vegas shut down, and we knew things were very serious.

Later that week we had a meeting. We would be leaving the building, going home to await further instructions. As I left the office on that last night, I told my friends we would be seeing each other in two weeks to eighteen months. I whistled "The End of the World" by Bob Geldof as I hobbled out on my slowly-healing stress-fractured leg.

Two weeks later we were back to pick up our computers and headsets. We would be working from home for the indefinite future.

The Spring ground on, became Summer, all feeling like a unending slog - the Long March, some called it, because the world seemed to be frozen as it was when last we had believed ourselves safe and secure. Racial conflicts arose, fueled by a series of police abuses and outright murders. Protests were met with more abuse of authority, and the use of what could generously be called "irregulars" to supplement official forces. The police and their mercenary allies took particular delight in exercising their abuse against members of the media. News crews were attacked and arrested. A photographer was shot in the eye and blinded with a rubber bullet.  A Navy veteran who approached a line of mercenaries in Police gear to ask them on whose authority they were engaging in their unlawful behavior was beaten and pepper-sprayed for his audacity. An assault rifle-toting teenager who had crossed state lines in the hope of engaging in conflict shot and killed several protesters during a confrontation. Another individual was shot and killed by a private security guard for a media group after he attacked the guard and the reporters.

COVID-19 forced a rethinking of how elections would be run. Paper absentee ballots became the norm. But at the same time, Trump appointee Louis DeJoy took steps to destabilize the US Postal Service and reduce its ability to handle mail in a timely manner. Millions of voters took their votes to drop boxes. Hundreds of thousands of votes, perhaps more, were likely lost or delayed in the USPS system and never got where they were going. (DeJoy's trumpery would have log-lasting repercussions: I sent out three packages on December 14. One got to Florida on December 18. One got to Columbia, MD on December 26. And one did not get to Dover, PA until December 30.)

Joe Biden defeated Donald Trump by the same electoral margin that Trump had defeated Hillary Clinton. Biden also received the largest number of popular votes in history, and defeated Trump by a margin of over seven million votes. Trump, who had declared his defeat of Clinton to be a "landslide," refused to accept (and still refuses to accept) the results of the election.

...and that's pretty much it. Working from home. Ordering what we need online. Making furtive trips to the grocery store and elsewhere to buy the things we can't get online. Going to church online. Not letting my mom out of the house except for trips to the doctor and visits to the cemetery. My leg got better, since I wasn't hiking from the parking lot to my desk every day anymore, and was able to give it time to heal.

The dying keeps going on. The Trump administration's response to COVID-19 has been a series of failures and disasters. Trump's failure to provide leadership has turned mask wearing into a political issue. The same people who are denying that COVID-19 is a real disease are also furiously denying that Joe Biden won the Presidential election.

The best guesses at when things might return to some sort of normal range from July to October. Other countries have been able to wrestle the disease into submission through stopping social transmission, through the use of bubbles and masks and public compliance with scientific guidance. Not the United States. Our spread is out of control. And still millions had no problem going out and partying to see in the New Year.

The dying isn't over. Trump still has nineteen days in office, and can still do some damage. Things won't magically change January 20, any more than they changed January 1. But we have hope.

"The dying isn't over. Trump still has nineteen days in office, and can still do some damage."

Prescient indeed, but Trump did more than "some" damage and is capable of much more significant damage in his final days in office.